Maryland has created a way to keep track of all of those vaccine incentives offered around the state.

George P Bush – Jeb’s son, who was once considered the future of the Republican party – sat down with FOX 5’s Jim Lokay Thursday night on the Final 5 to talk about his campaign for Texas Attorney General, his role in the border wall construction, and what it’s like pursuing the approval of Donald Trump.

Saying goodbye after an amazing time during our FOX 5 ZIP TRIP to BALLSTON!

A family with two gay dads stopped by Sesame Street on Thursday to celebrate Family Day on the show.

The 15-vehicle crash happened Saturday in a curvy area of Interstate 65 "notorious" for hydroplaning. Eight of the victims were kids traveling in a youth ranch van.

A Capitol police officer whose efforts during the Jan. 6 riot were captured on a viral video was honored once again Friday night when he threw out the first pitch at Nationals Park. 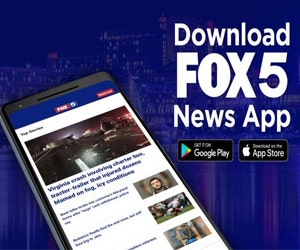