WASHINGTON (FOX 5 DC) - The inauguration of President-elect Joe Biden and Vice President-elect Kamala Harris will no doubt be historic, not only because of who is being elected into the positions but because of the context of what is taking place in the world as they are being sworn into power.

Will the inauguration help unite a divided nation

FOX 5’s Tom Fitzgerald talks with the Washington Post’s Bob McCartney about the upcoming events for the inauguration, who will be present, what events to expect, and what impact it might have.

From the COVID-19 pandemic to the attack on the U.S. Capitol over claims of election fraud, the 2021 inauguration will be like no other. However, there have been inaugurations throughout U.S. history with their own significant context that reminds us of what we've endured and how we can move forward.

Here are some of the most significant inaugurations throughout our nation's history and what was happening at the time that makes them stand out. 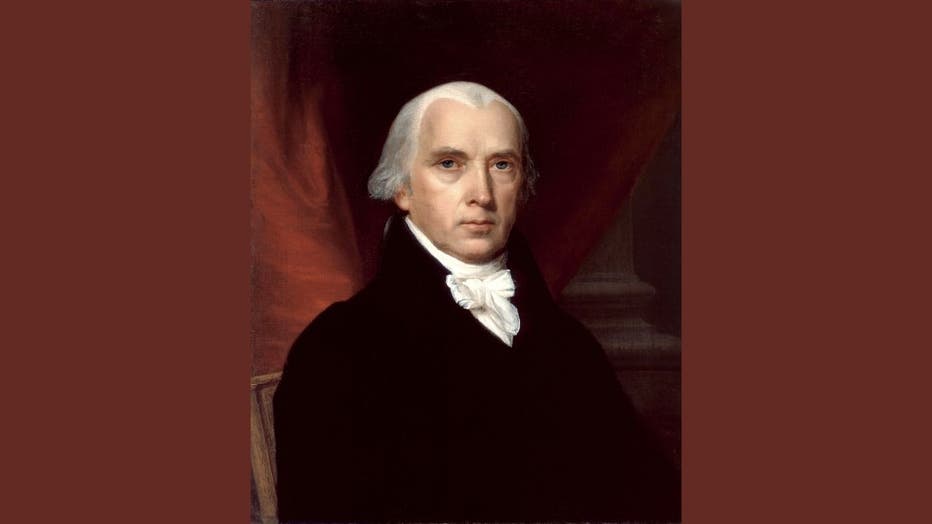 Portrait of James Madison, the 'Father of the Constitution,' by an unknown artist (oil on canvas from the White House collection, Washington DC), 1816. The portrait was commissioned by James Monroe. (Photo by GraphicaArtis/Getty Images)

While historians say that Madison had no intention of being a wartime president, he did mention the war multiple times in his second inaugural speech.

"From the weight and magnitude now belonging to it, I should be compelled to shrink if I had less reliance on the support of an enlightened and generous people, and felt less deeply a conviction that the war with a powerful nation, which forms so prominent a feature in our situation, is stamped with that justice which invites the smiles of Heaven on the means of conducting it to a successful termination," Madison said.

The War of 1812 ended in February of 1815 during Madison's second term, but not before British troops burned the U.S. Capitol in 1814, the last time the Capitol was attacked before Jan. 6. 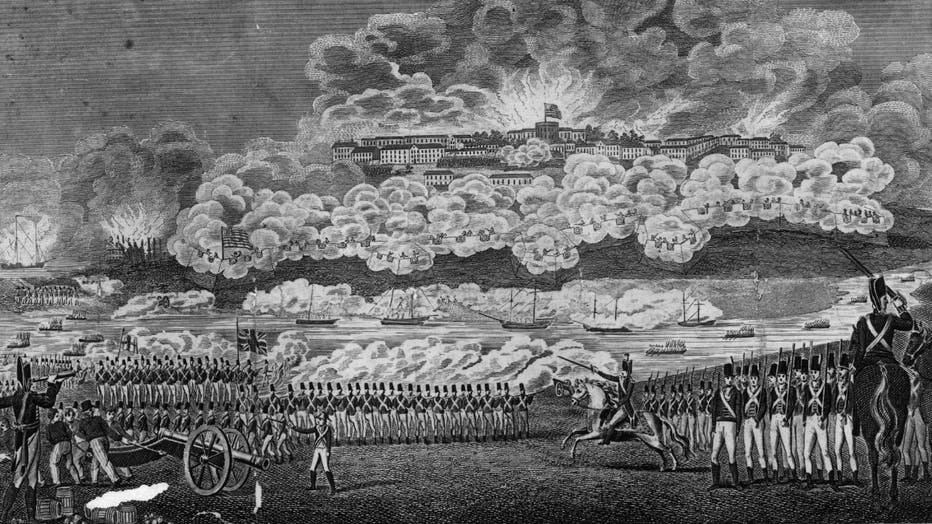 The attack on Washington DC by British troops during the War of 1812. (Photo by MPI/Getty Images)

READ MORE: When was the last time the Capitol building was stormed?

Fun fact: Madison's first Inaugural Ball was held the evening after the swearing-in ceremony and took place at Long's Hotel. Tickets cost $4 each.

Just a few months after the infamous Harpers Ferry raid, the election of 1860 was held, with some historians regarding it as the most momentous election in American history. 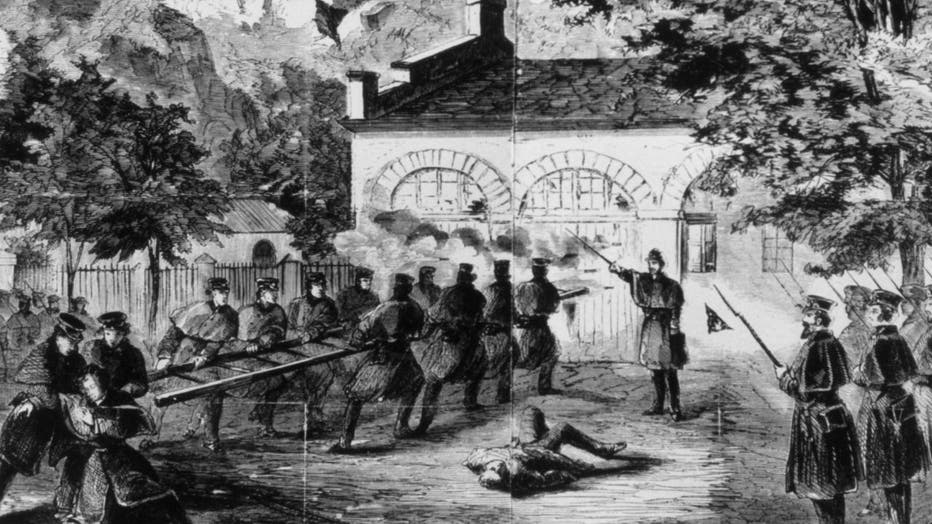 The Democratic convention was held in Charleston in April where the Northern and Southern wings of the party split. Republicans nominated Lincoln, and with the split in the Democratic party, his victory was all but guaranteed.

However, he was about to preside over a country that was more divided than ever. On Dec. 20, 1860, South Carolina became the first state to secede from the Union over the issue of slavery, with multiple states following soon after.

"We are not enemies, but friends," Lincoln said in his inaugural speech. "We must not be enemies. Though passion may have strained it must not break our bonds of affection. The mystic chords of memory, stretching from every battlefield and patriot grave to every living heart and hearthstone all over this broad land, will yet swell the chorus of the Union, when again touched, as surely they will be, by the better angels of our nature." 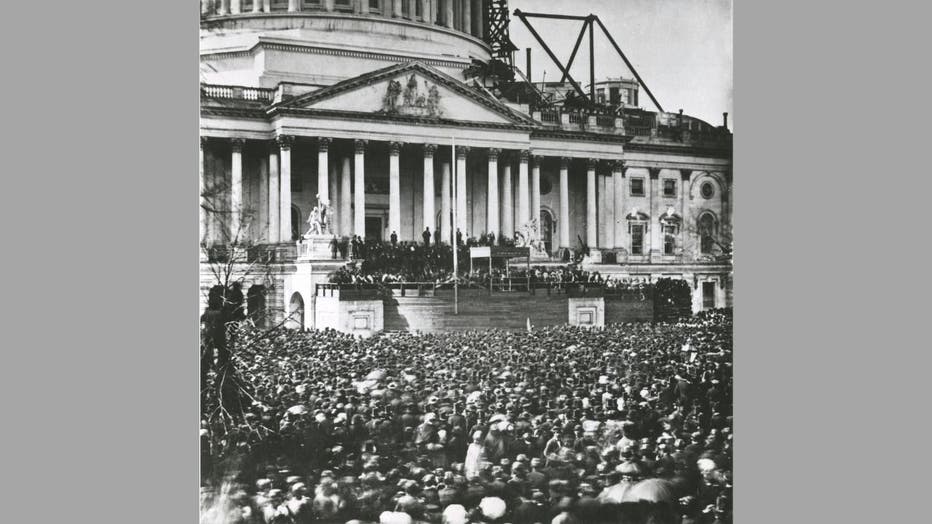 Abraham Lincoln elected President of the United States of America at the Capitol building still on site. Washington, 4th March 1861. (Photo by Mondadori via Getty Images)

Fun fact: When a bystander asked Lincoln how he would vote for president, he replied, "How vote? By ballot!" Then, when he did vote, he cut his name from the top of the ballot and voted the straight Republican ticket.

Lincoln not only won re-election but carried every state at the time except Kentucky, Delaware and New Jersey.

However, shortly after his second inauguration, he was assassinated in April 1865.

There was no formal inauguration ceremony for Andrew Johnson. He took the oath of office at Kirkwood House in D.C. He went on to be regarded as one of the worst presidents in U.S. history, famously impeached on 11 articles. 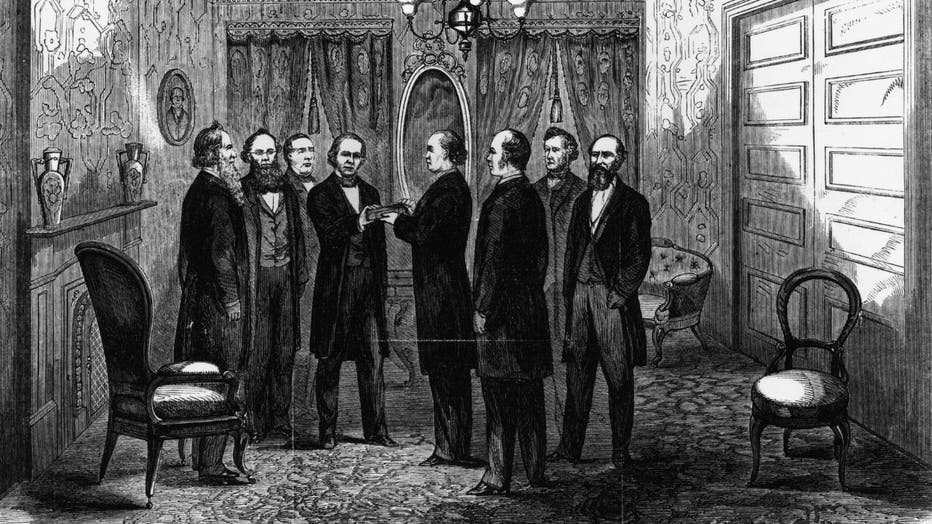 Fun fact: President Johnson worked out of the Treasury Department for the first few weeks of his term as Mrs. Lincoln was too distraught to leave the White House for more than a month after her husband's death.

America was in the midst of the Great Depression during the 1932 presidential election. Despite President Herbert Hoover's best efforts to bring the country out of economic ruin, it wasn't enough.

President Franklin Delano Roosevelt, better known simply as FDR, campaigned against Hoover on the promise of a "new deal" for the American people. FDR ended up carrying 42 of the 48 states.

"I am prepared under my constitutional duty to recommend the measures that a stricken nation in the midst of a stricken world may require," he said during his inaugural address. "These measures, or such other measures as the Congress may build out of its experience and wisdom, I shall seek, within my constitutional authority, to bring to speedy adoption." 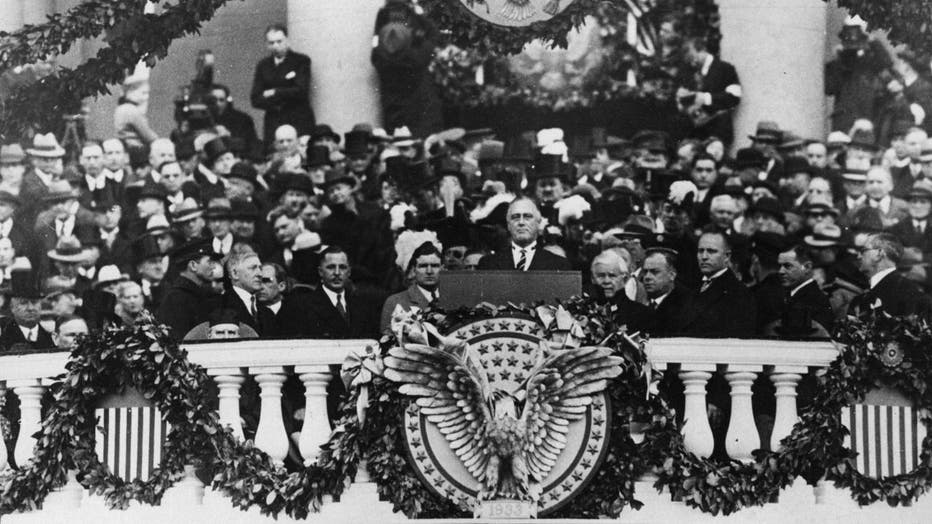 1933: Franklin Delano Roosevelt (1882 - 1945) making his inaugural address as 32nd President of the USA. Beneath his is the American symbol of an eagle with its wings spread. Roosevelt went on to be the only man to take four terms as President.(1932,

He also delivered the iconic inaugural speech line when he said, "So, first of all, let me assert my firm belief that the only thing we have to fear is fear itself—nameless, unreasoning, unjustified terror which paralyzes needed efforts to convert retreat into advance."

Fun fact: FDR remains the only president to serve for more than two terms as he served three and was elected for four.

FDR won his fourth election in 1944 as World War II occupied the thoughts and minds of most Americans. However, his health was deteriorating and in April of 1945, he passed away from a cerebral hemorrhage.

After scarcely seeing FDR and receiving no briefing on the development of the atomic bomb, when Harry Truman became president, he told reporters, "I felt like the moon, the stars and all the planets had fallen on me."

Truman did not give an official inauguration address at his first inauguration but would go on to win the election in 1948 and give a speech in January 1949.

"Today marks the beginning not only of a new administration but of a period that will be eventful, perhaps decisive, for us and for the world," he said in his address. "It may be our lot to experience, and in large measure to bring about, a major turning point in the long history of the human race. The first half of this century has been marked by unprecedented and brutal attacks on the rights of man, and by the two most frightful wars in history. The supreme need of our time is for men to learn to live together in peace and harmony." 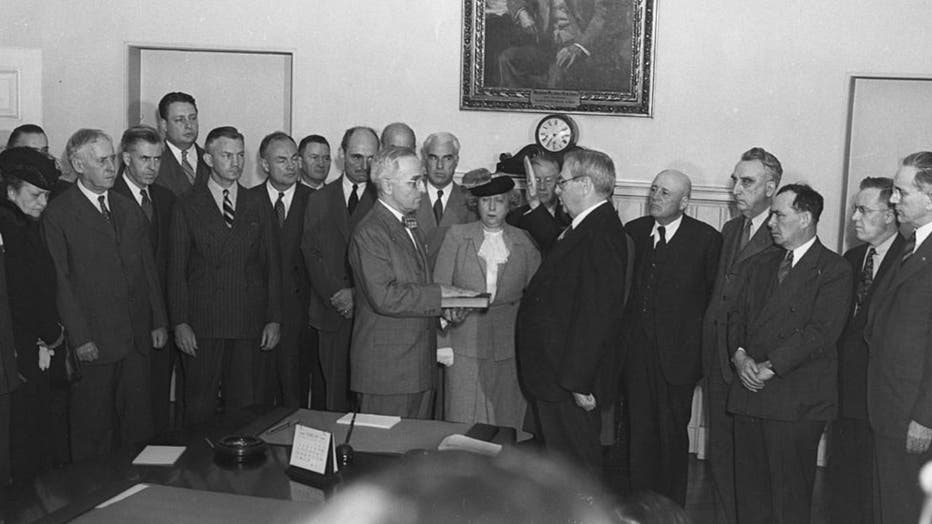 Harry S. Truman taking the oath of office as President of the United States after the death of President Franklin D. Roosevelt. (Photo by Library of Congress/Corbis/VCG via Getty Images)

John F. Kennedy was shot and killed in Dallas, just two years into his first term as president. Kennedy uttered one of the most famous lines in an inauguration speech in 1961 when he said, "Ask not what your country can do for you but what you can do for your country."

Lyndon B. Johnson's inauguration took place mere hours after JFK was shot. The widely known photograph of his swearing-in captures Johnson taking the oath of office aboard Air Force One with Jackie Kennedy at his side. 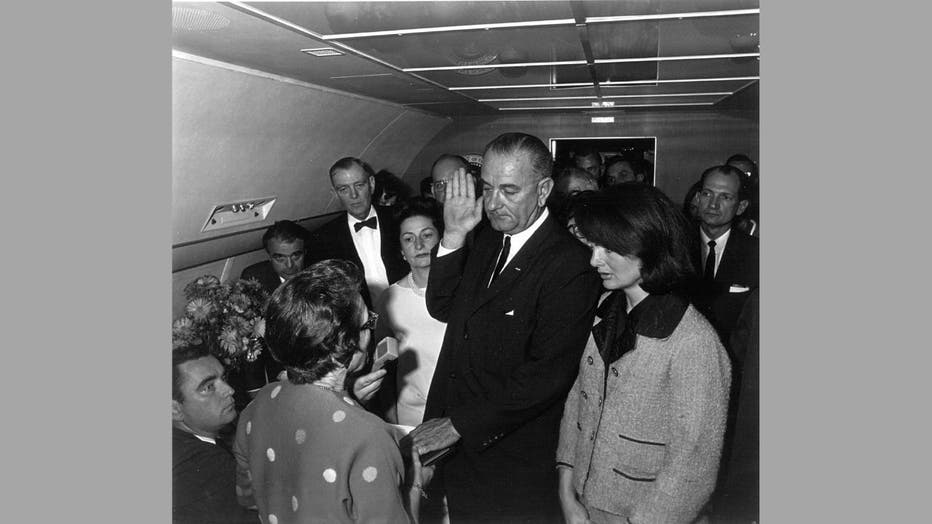 Lyndon B. Johnson takes the oath of office as President of the United States, after the assassination of President John F. Kennedy November 22, 1963. (Photo by National Archive/Newsmakers)

There was no official speech for Johnson's first inauguration, but he went on to be re-elected in 1964 at the height of the civil rights movement.

"Our enemies have always made the same mistake," Johnson said in his second inaugural speech. "In my lifetime--in depression and in war--they have awaited our defeat. Each time, from the secret places of the American heart, came forth the faith they could not see or that they could not even imagine. It brought us victory. And it will again."

Fun fact: LBJ is the only president to be sworn in on Air Force One.

President Richard Nixon resigned in August of 1974 after being impeached for his involvement in the Watergate scandal.

Gerald Ford was sworn in at the White House. Although he did not give an official inaugural speech, he did deliver remarks upon his swearing-in that have become infamous in the American political cannon. 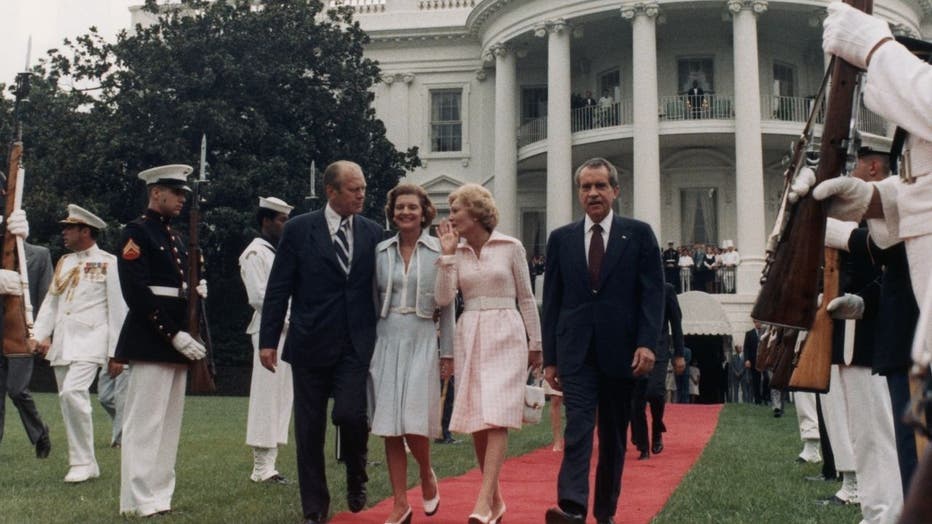 After resigning, President Nixon leaves the White House with his family, vice president Ford and his wife. (Photo by © CORBIS/Corbis via Getty Images)

"My fellow Americans, our long national nightmare is over," he said. "Our Constitution works; our great Republic is a government of laws and not of men. Here the people rule."

When President George Bush won re-election in 2004, the war on terror was at its peak as Bush's first term saw one of the worst days in American history, 9/11. 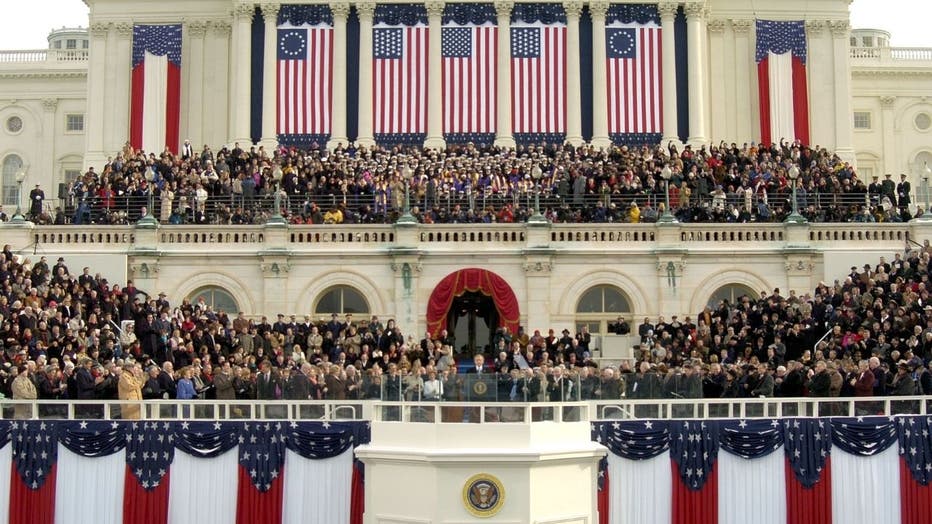 U.S. President George W. Bush stand on the stage during Inauguration Day ceremonies on the west front of the U.S. Capitol January 20, 2005 in Washington, D.C. Bush's address outlined his plans to pursue freedom around the world and push a legacy-sett

Bush reportedly told his staff that he wanted his second inaugural speech to be all about freedom. Reports also say combined, the speech used the words "free," "freedom" and "liberty" 49 times.

"Across the generations, we have proclaimed the imperative of self-government, because no one is fit to be a master, and no one deserves to be a slave," Bush said in his address. "Advancing these ideals is the mission that created our Nation. It is the honorable achievement of our fathers. Now it is the urgent requirement of our nation's security and the calling of our time. So it is the policy of the United States to seek and support the growth of democratic movements and institutions in every nation and culture, with the ultimate goal of ending tyranny in our world." 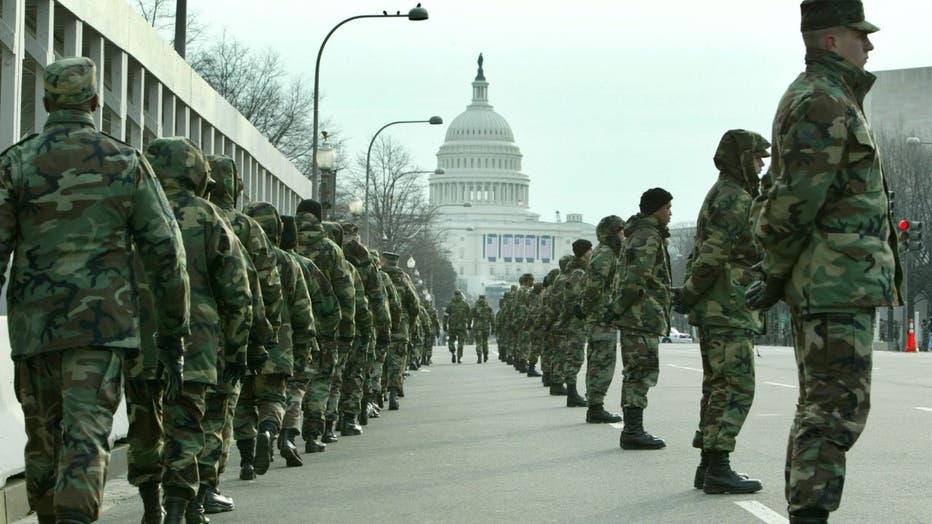 Fun fact: Security was tighter at this inauguration than in any before since it was the first presidential inauguration after 9/11. The event was guarded by 13,000 police and soldiers and a 100 square block area was closed to traffic in downtown D.C.