D.C. police and public officials have cleared out an encampment that became the epicenter of confrontations between protesters and law enforcement Monday night in the Black Lives Matter Plaza area.

WASHINGTON (FOX 5 DC) - D.C. police and public officials have cleared out an encampment that became the epicenter of confrontations between protesters and law enforcement Monday night in the Black Lives Matter Plaza area.

According to police and officials, the officers were met with physical resistance – and four of them were reportedly injured during clashes with protesters.

Despite a significant D.C. police presence, protesters are trying to haul down an Andrew Jackson statue in Lafayette Park Monday evening.

The confrontation reached its zenith when protesters attempted to haul down a statue of Andrew Jackson in Lafayette Park.

Once police had secured the scene around the statue, the protesters receded to Black Lives Matter Plaza. 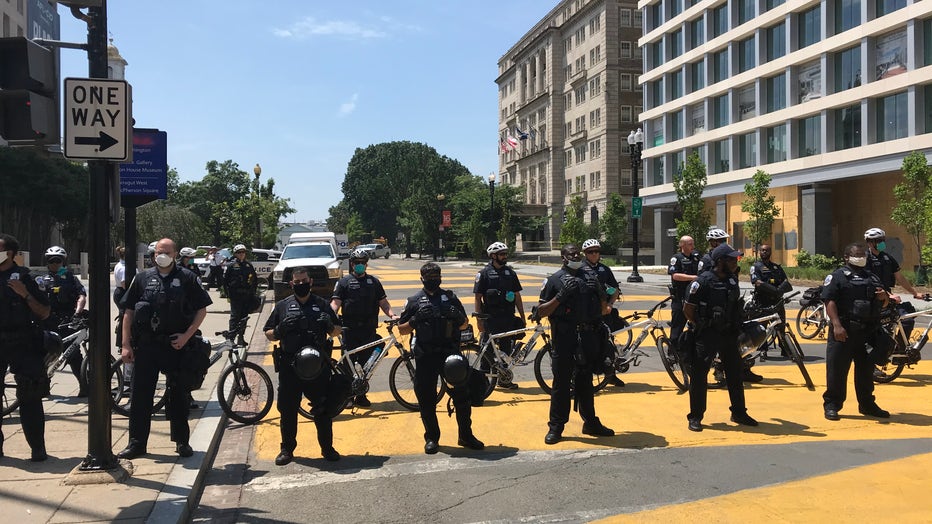 During the stalemate, graffiti appeared on the columns at historic St. John’s Church referring to “BHAZ” – or, “Black House Autonomous Zone.”

Although the graffiti may have suggested parallels with Seattle’s Capitol Hill Autonomous Zone, FOX 5’s Paul Wagner indicated that the protesters’ actions in D.C. were dissimilar.

On Tuesday morning, police and public officials returned to the scene, and successfully removed the encampment.

They were followed by street sweepers and other public employees who cleaned out the area.

Deputy Mayor for the District of Columbia Health and Human Services Wayne Turnage offered a statement on behalf of his department:

On Tuesday night, the Rt. Rev. Mariann Budde, Bishop of the Episcopal Diocese of Washington, released the following statement to FOX 5:

"Pillars can be repainted. Buildings can be rebuilt. Black and brown people killed by police cannot be brought back from the dead. The damage of property is inconvenient, costly, and worst of all, serves to deflect our collective attention from what's most important.  I am resolutely focused on ending police brutality and murder, and the societal indifference to gross racial inequities that are fueling widespread public protest."