President Joe Biden and Democrats held a 'unit rally' Thursday at Richard Montgomery High School in Rockville, Maryland to kick off the start of campaigning for the midterm elections.

ROCKVILLE, Md. - President Joe Biden called on Democrats Thursday "to vote to literally save democracy once again" — and compared Republican ideology to "semi-fascism" — as he led a kickoff rally and a fundraiser in Maryland 75 days out from the midterm elections.

The events, in the safely Democratic Washington suburbs, were meant to ease Biden into what White House aides say will be an aggressive season of championing his policy victories and aiding his party’s candidates. He is aiming to turn months of accomplishments into political energy as Democrats have seen their hopes rebound amid the legacy-defining burst of action by Biden and Congress.

From bipartisan action on gun control, infrastructure and domestic technology manufacturing to Democrats-only efforts to tackle climate change and health care costs, Biden highlighted the achievements of the party’s unified but razor-thin control of Washington. And he tried to sharpen the contrast with Republicans, who once seemed poised for sizable victories in November.

Just months ago, as inflation soared, Biden’s poll numbers soured and his agenda stalled, Democrats braced for significant losses. But the intense voter reaction to the Supreme Court’s overturning of Roe v. Wade and a productive summer on issues of core concern to Democrats have the party feeling like it is finally on the offensive heading into the Nov. 8 vote, even as the president remains unpopular.

Ahead of the rally, Biden raised about $1 million at an event with about 100 donors for the Democratic National Committee and the Democratic Grassroots Victory Fund in the backyard of a lavish Bethesda home. 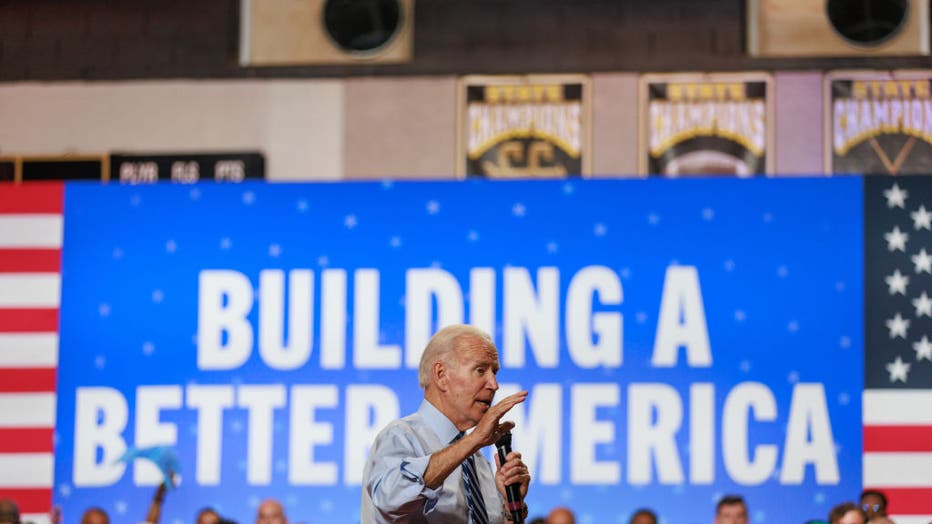 After his speech at the rally, Biden lingered with the largely mask-free crowd for nearly 30 minutes, diving back into the style of campaigning that had been disrupted for Democrats for more than two years by the COVID-19 pandemic. The president, who was identified as a close contact of first lady Jill Biden on Wednesday when she was diagnosed with a "rebound" case of the virus, did not appear to wear a face covering as he posed for selfies and hugged supporters.

Biden’s Thursday events come a day after the president moved to fulfill a long-delayed campaign pledge to forgive federal student loans for lower- and middle-income borrowers — a move that Democrats believe will animate younger and Black and Latino voters.

Republicans, though, saw their own political advantage in the move, casting it as an unfair giveaway to would-be Democratic voters.

"President Biden’s inflation is crushing working families, and his answer is to give away even more government money to elites with higher salaries," said Senate GOP leader Mitch McConnell. "Democrats are literally using working Americans’ money to try to buy themselves some enthusiasm from their political base."

Biden on Thursday expanded on his effort to paint Republicans as the "ultra-MAGA" party — a reference to former President Donald Trump’s "Make America Great Again" campaign slogan — opposing his agenda and embracing conservative ideological proposals as well as Trump’s false claims about the 2020 election. 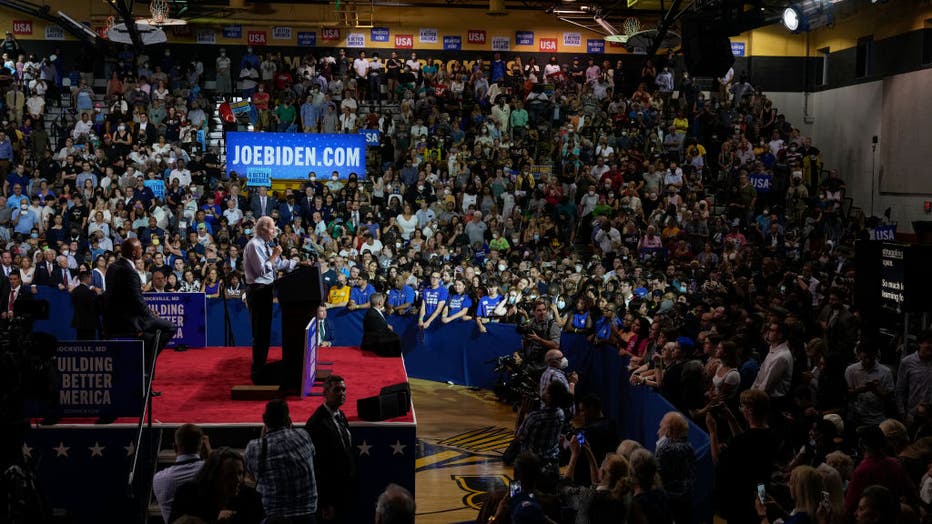 "What we’re seeing now is either the beginning or the death knell of an extreme MAGA philosophy," Biden told donors at the fundraiser. "It’s not just Trump, it’s the entire philosophy that underpins the — I’m going to say something, it’s like semi-fascism."

"Biden forced Americans out of their jobs, transferred money from working families to Harvard lawyers, and sent our country into a recession while families can’t afford gas and groceries," said spokesperson Nathan Brand. "Democrats don’t care about suffering Americans — they never did."

Since the June Supreme Court ruling removing women’s constitutional protections for abortion, Democrats have seen a boost in donations, polling and performance in special elections for open congressional seats. The latest came Tuesday in a Hudson Valley swing district that, in a Republican wave year, should have been an easy GOP win. Instead, Democrat Pat Ryan, who campaigned on a platform of standing up for abortion rights, defeated Republican Marc Molinaro.

"MAGA Republicans don’t have a clue about the power of women," Biden said, noting the resonance of the abortion issue with women voters as some in the GOP push a national ban on the procedure. "Let me tell you something: They are about to find out."

The shift is giving Democrats a new sense that a Republican sweep of the House is no longer such a sure bet, particularly as battle-tested incumbents polling better than Biden work their districts.

Meanwhile, Democrats have benefited from Republican candidates who won primaries but are struggling in the general campaign. Trump-backed Senate candidates have complicated the GOP’s chances in battleground states like Pennsylvania, Georgia and Arizona, while several Trump-aligned candidates in House races were not always the party’s first choice. 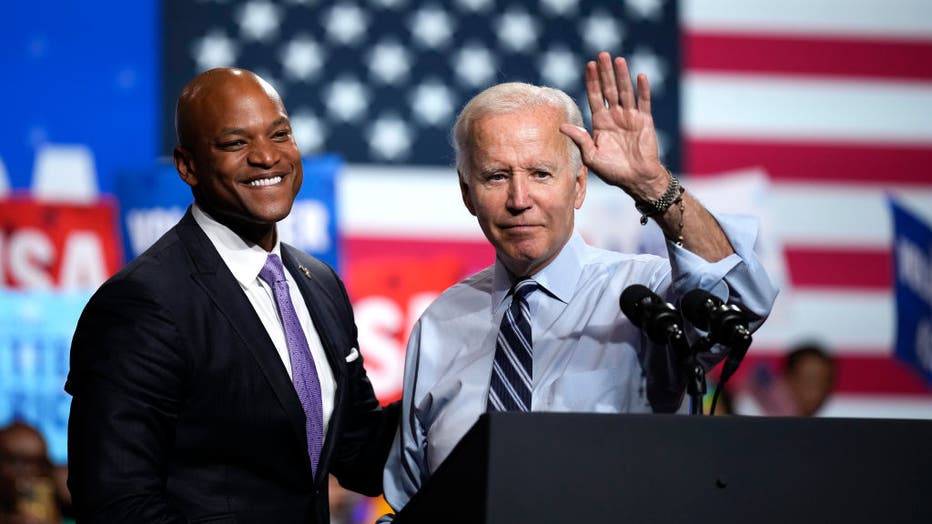 Trump’s grip on the GOP remains strong and has perhaps even become tighter in the aftermath of the FBI search of his Mar-a-Lago home.

JB Poersch, the president of Senate Majority Project, an outside group that is working to elect Democrats to the Senate, said the Republican candidates are "getting caught up in the Trump tornado once again — that is exactly what voters of both parties don’t want."

Biden’s political event, sponsored by the Democratic National Committee, comes as the president and members of his Cabinet are set to embark on what the White House has billed as the "Building a Better America Tour" to promote "the benefits of the President’s accomplishments and the Inflation Reduction Act to the American people and highlight the contrast with Congressional Republicans’ vision."

Meanwhile, the White House has benefited from a steady decline in gasoline prices, which, while still elevated, have dropped daily since mid-June.

"Our critics say inflation," Biden said, dismissing GOP attacks that his policies resulted in inflation being at a 40-year high. "You mean the global inflation caused by the worldwide pandemic and Putin’s war in Ukraine?"

In Maryland, Biden was joined by gubernatorial candidate Wes Moore and a host of other officials on the ballot. Moore, introducing Biden, said his Trump-backed rival "Dan Cox is not an opponent. He’s a threat."

Months ago, Democratic lawmakers facing tough reelection fights sought to make themselves scarce when Biden came to town, though White House aides said Biden could still be an asset by elevating issues that resonate with voters and sharpening the distinction with Republicans.

Now, allies see the fortunes beginning to change and the president as more of a direct asset to campaigns. 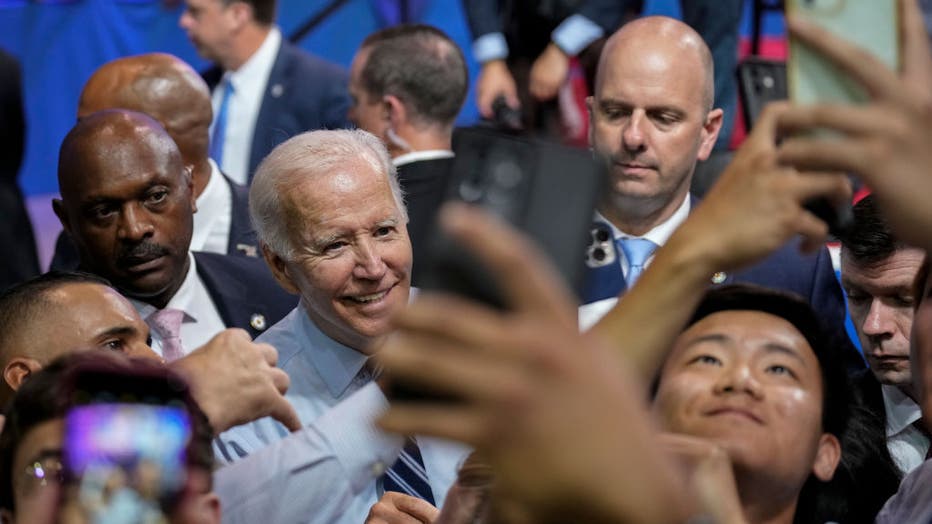