FALLS CHURCH, Va. - The Arlington County Board gave unanimous approval Saturday to Amazon’s plans to build a unique, helix-shaped tower as the centerpiece of its emerging second headquarters in northern Virginia. 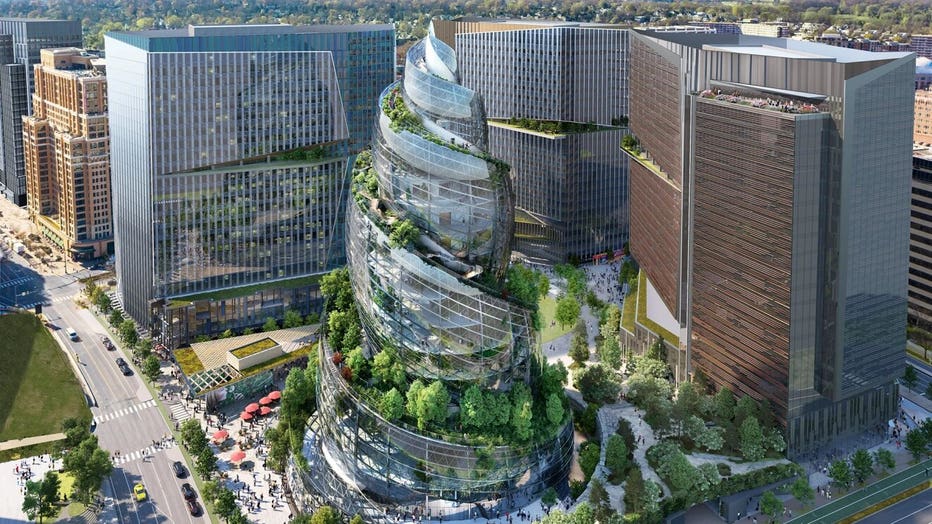 Amazon announced the plans in February 2021 for the eye-catching, 350-foot tower to anchor the second phase of its redevelopment plans. The new office towers will support a second headquarters for Amazon that is expected to welcome more than 25,000 workers when it’s complete.

The Arlington County Board gave unanimous approval Saturday to Amazon’s plans to build a unique, helix-shaped tower as the centerpiece of its emerging second headquarters in northern Virginia.

The helix is one of several office towers granted approval, but the helix stands out. The spiral design features a walkable ramp wrapping around the building with trees and greenery planted to resemble a mountain hike.

Amazon opened its doors to the headquarters, which will be going up at the newly renamed National Landing, to show off their work on Wednesday and FOX 5 came along.

Amazon has said the building is designed to help people connect to nature, and the outdoor mountain climb will be open to the public on weekends.

PAST COVERAGE: Arlington residents weigh in on next phase of Amazon's HQ2

Since then, the plans have gone through the famously thorough review process of Arlington County, including numerous public hearings. Earlier this month, the county planning commission voted 9-0 to support the project.

On Saturday, the County Board voted 5-0 to approve the plans. They also include park space and will accommodate a community high school, along with ground level retail.

Amazon has announced its plans to develop hundreds of new affordable housing units in the DMV over the next five years.

Amazon has said it hopes to complete the project in 2025.

RELATED: Find out what Amazon’s Arlington HQ2 is expected to look like

Because skyscrapers are banned in the District of Columbia, and the Amazon buildings will be among the tallest in Arlington County, from some vantage points the helix will dominate the region’s skyline like no building other than the Washington Monument.