While it is only the 4th day of 2022, those warmer days already seem like so long ago. Monday morning brought the first major snow to the region in about three years.

All three major airports in our region saw record daily snowfall, with D.C. officially picking up about 7" of snow, which is an inch more than all the snow the city has seen in the past two winters, combined.

Mike Thomas has the FOX 5 Weather forecast for Wednesday, January 5

Mike Thomas has the FOX 5 Weather forecast for Wednesday, January 5

Temperatures plummeted into the teens in many locations by Tuesday morning, and the wet snow quickly turned the morning commute into a standstill icy mess.

And believe it or not, yes another winter storm may be in store before this week is done. 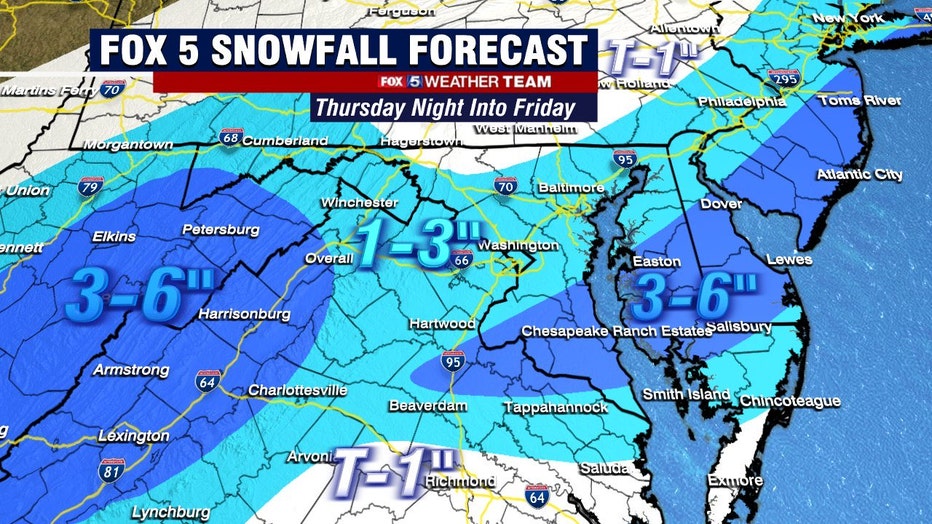 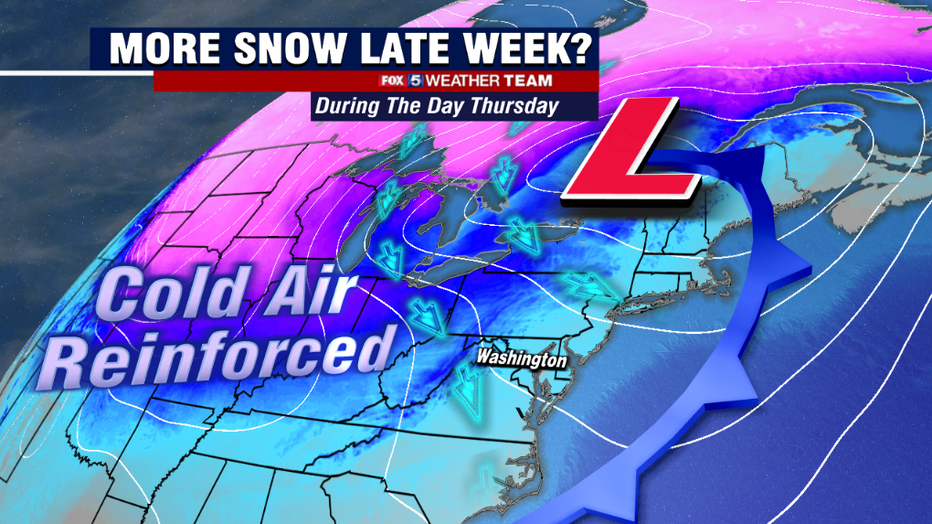 It all begins Thursday night. A storm system will pass well to our north. While we are not anticipating any precipitation from this particular system, it will drag a cold front through the region that will bring in some colder and drier air into the region by Thursday evening.

This is what will set the stage for the storm system that pushes into our region during the overnight hours. 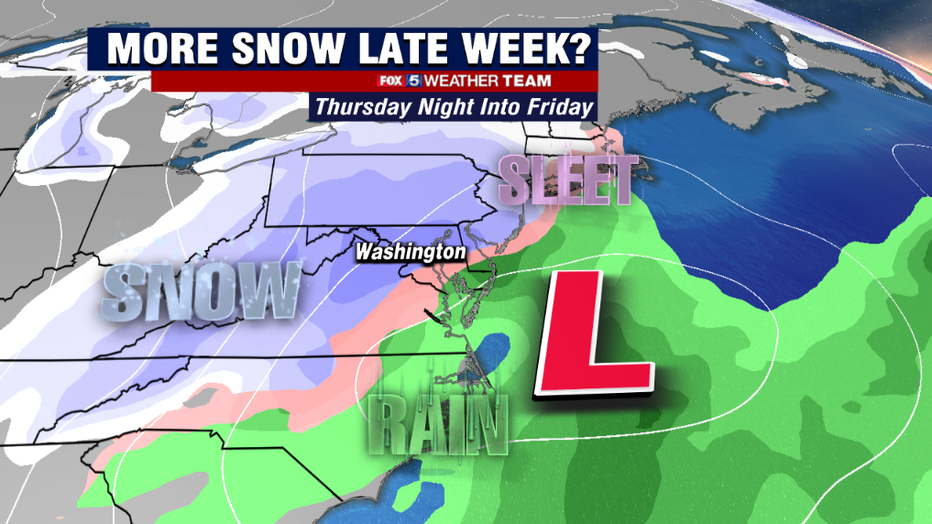 A strong piece of upper level energy will then dive southward through the Midwest and into the South, triggering the formation of a new storm system near the Gulf Coast on Thursday afternoon.

This system will begin strengthening as it turns up the eastern coastline.

RELATED: I-95 shutdown in Virginia; some drivers stranded since Monday morning following snowstorm

SKYFOX captured images that appeared to show drivers turning around on parts of Interstate 95 in Virginia to escape traffic that kept some motorists trapped on the highway overnight.

Questions remain as to just how rapidly this storm will strengthen, and the exact track this storm will take. Both of those could have major implications on who sees snow, and how much snow falls. These details should be given more clarity in the days ahead.

But there is enough model agreement this far in advance that we feel confident that some parts of our region will pick up some measurable snow. 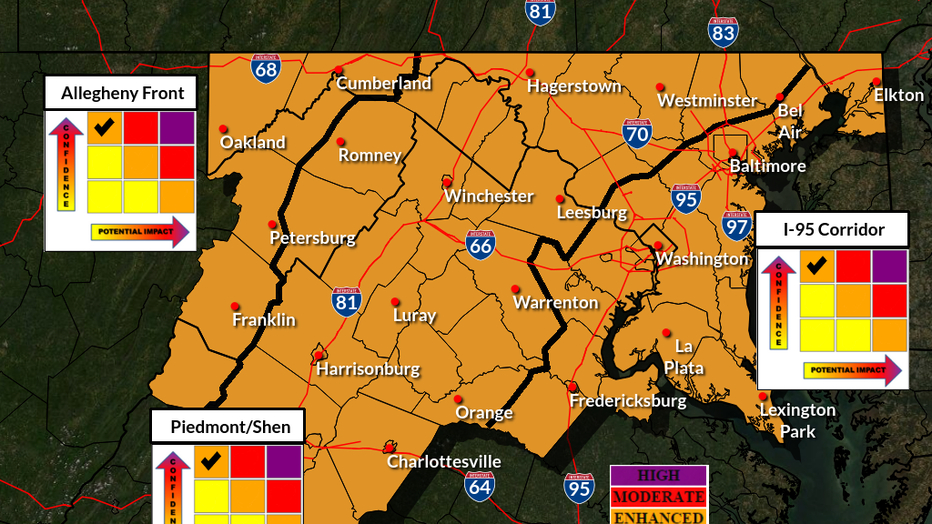 The National Weather Service this morning placed the entire region under an enhanced threat for a winter storm late Thursday night into Friday.

They list the threat as "high confidence, low impact"…meaning they are confident some snow will fall, and believe it will be snow that is less impactful than Monday was around here.

However they note that there is still a lot of uncertainty with the specifics of this storm, and that data such as expected conditions or forecast amounts could change as more data is examined in the future. 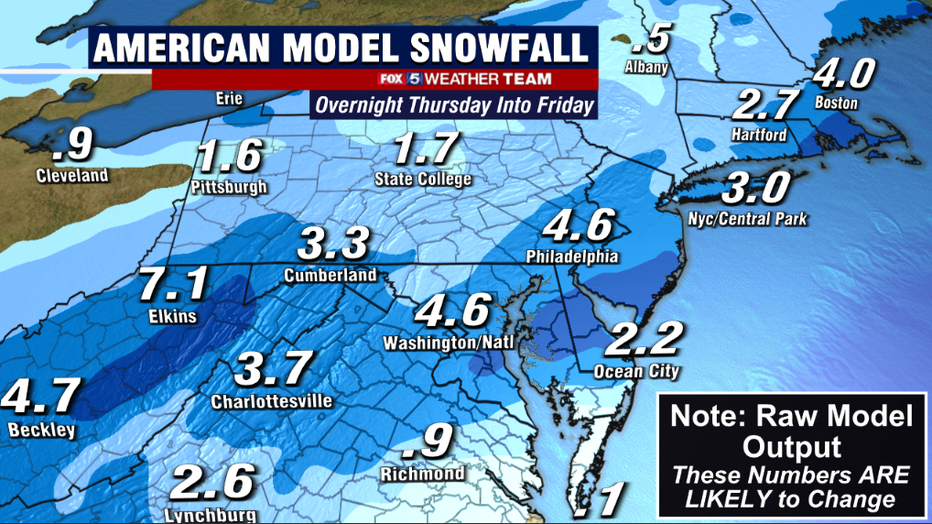 Current model projection range anywhere from "light" to "disruptive" in terms of forecast snow amounts. The American model has generally been the more aggressive model with the snowfall, showing a pretty wide zone of 4-6" amounts across our area.

They American preformed very well with Monday's snowfall, and was the first to hop on the idea of a bigger storm. So even if it is typically seen as an aggressive weather model, it is certainly not to be discounted. 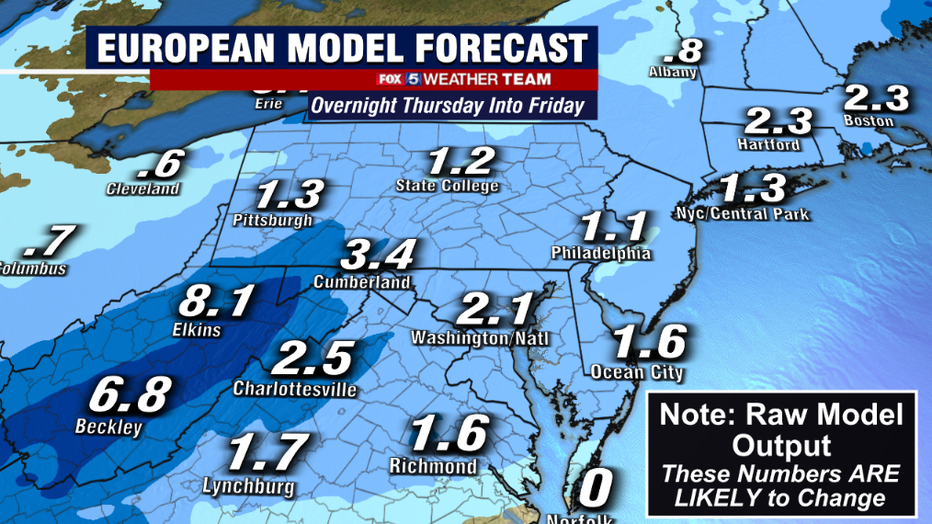 The European also shows pretty widespread snows, but is lighter with more 1-3" amounts outside of the mountain zones.

One thing that does look more likely compared to the Monday system, is that areas northwest of town, who saw very little in Monday's storm, should be more in the mix with the one on Friday for some of the decent snows.

We will know more in the days ahead as more and better forecasting data become available.

Stick with your Fox 5 Weather Team, we will keep you up to date on the latest projections.