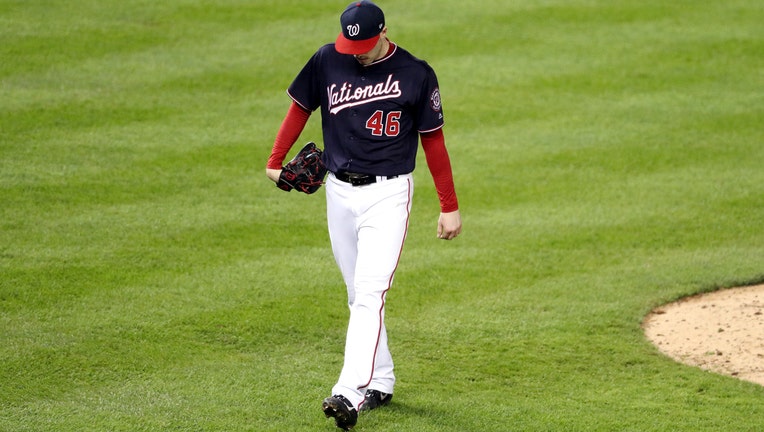 Patrick Corbin #46 of the Washington Nationals walks off the field after retiring the side in the fifth inning against the Houston Astros in Game Four of the 2019 World Series at Nationals Park on October 26, 2019 in Washington, DC. (Photo by Will Ne (Getty Images)

WASHINGTON - Jose Urquidy outpitched all those big-name aces who preceded him, the unheralded Houston rookie quieting Washington's bats and the Nationals Park crowd, too.

Houston and Washington are all even in a World Series that has been one big road show.

Alex Bregman busted out of his slump with a go-ahead single in the first inning and a grand slam in the seventh, and the resurgent Astros routed the Nationals 8-1 Saturday night to tie the Series at two games apiece.

Visiting teams have won the first four games for the first time since 1996, when the Yankees broke the pattern in Game 6 against Atlanta to take the title.

Game 6 will be Tuesday night in Houston, when the Astros lose their road-field advantage.

The Fall Classic is now a best-of-three series after the Nationals' Game 4 loss Saturday night at Nationals Park.

Yuli Gurriel also drove in a run in the first as Houston strung together four singles in a seven-pitch span for a 2-0 lead against Patrick Corbin. Robinson Chirinos homered for the second straight day, a two-run drive that boosted the lead to 4-0 in the fourth.

Fans started leaving in the seventh, when the Astros sent 10 batters to the plate and battered the bullpen. Bregman, who began the night in a 1-for-13 Series slide, had the big blow, driving a low, inside fastball from Fernando Rodney into the left field stands of the ballpark where was the All-Star Game MVP in 2018. He held his bat high as he slowly walked out of the batter's box, then took nearly 30 seconds to circle the bases.

RELATED: Sunday morning will be a soaker, but wet weather clears out in time for Game 5 of World Series

Starting pitchers were the talk of the Series coming in, with Washington's Stephen Strasburg, Scherzer and Corbin combining for 12 All-Star selections and three Cy Young Awards. The baseball cards of Houston's Cole, Justin Verlander and Zack Greinke shine with 17 All-Star picks, two Cy Youngs and one MVP.

RELATED: The Washington Senators didn’t win the last World Series in DC, it was the Washington Homestead Grays of the Negro League

But there were just five 1-2-3 innings by starters in the first three games, and the most consecutive outs were by the Nationals' Anibal Sanchez, who retired seven straight in Game 3.

Urquidy, a 24-year-old right-hander, exceeded them all.

Not bad for a TBA.

Urquidy wasn't even announced as Houston's starter until after Game 3, with Astros manager AJ Hinch hoping to piece together innings any way he could.

Urquidy began the season at Double-A Corpus Christi, was bumped up to Triple-A Round Rock in mid-May and made his major league debut in July. He faced the Nationals in just his 12th big league appearance, joining Fernando Valenzuela (1981) and Jaime Garcia (2011) as the only Mexican starting pitchers in Series history.

You can catch Game 5 pregame coverage starting at 6 p.m. Sunday on Fox 5.