Another viral Tik Tok trend has found its way to schools in the DMV. The new trend, called "Devious Licks," has students committing acts of vandalism, stealing soap and paper towel dispensers, and causing damage to other school property.

FAIRFAX COUNTY, Va. (FOX 5 DC) - Another viral Tik Tok trend has found its way to schools in the DMV.

The new trend, called "Devious Licks," has students committing acts of vandalism, stealing soap and paper towel dispensers, and causing damage to other school property. Now, both parents and school officials are concerned.

If you try to search ‘Devious Licks’ on Tik Tok, it’ll take you to a different screen, because the app's administrators have removed any content and hashtags related to the challenge.

One Prince William County parent, who wanted to remain anonymous, says a student at her son’s school ripped a soap dispenser off the bathroom wall and put it in the toilet. She also said there was another incident where several boys took a fire extinguisher from the school, used it outside, and posted it to Snapchat.

"I wish they could take a moment to think about how certain actions may affect their future and others around them," she said.

Several Fairfax County principals are sending out letters to parents this week about the trend, like the principal of Falls Church High School, asking parents to take some time to have a talk with their kids. 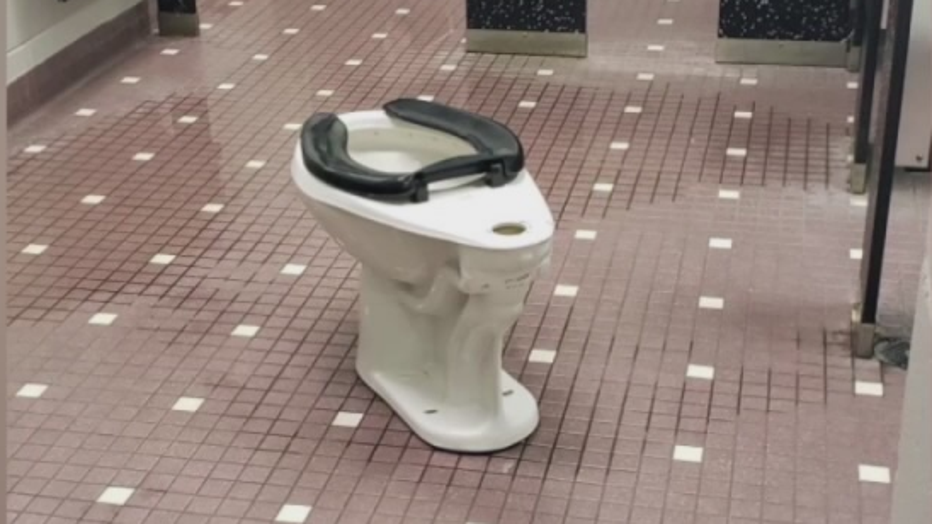 MORE FROM FOX 5: Capitol fencing returns for 'Justice for J6' rally; organizer says no political clothing will be allowed

I would like to ask that you take some time to talk with your children about a viral meme on TikTok that has found its way on to school campuses nationwide. The meme calls for students to vandalize schools in several ways and promotes these ideas under the tag, "Devious Licks."

We have seen some of this at FCHS recently and ask for your support in helping make sure our students are not engaging in this unacceptable behavior."

You may be aware that there is a current trend that has emerged on the social media platform TikTok calling for students to vandalize schools in several ways and promote the acts under the tag, "Devious Licks."

We have experienced some suspected vandalism at Rocky Run MS over the past 24 hours and ask for your support in helping make sure our students are not engaging in this unacceptable behavior. We are especially concerned because students are damaging paper towel dispensers and stealing soap dispensers from our bathrooms which presents a challenge to maintaining a healthy and safe school environment.  Our staff will be reminding our students that damaging school property is a violation of the FCPS Student Rights and Responsibilities and will carry disciplinary consequences.  Rocky Run MS is equipped with indoor security cameras that cover hallways and the entrances to bathrooms.  We will continue to monitor these areas closely and may have to close bathrooms during transitions if the behavior continues.

Please remind your child not to engage in this type of behavior and to share information with a staff member if they witness an event.

Fairfax County Public Schools says they’re aware of several incidents of damage to school property related to the Tik Tok challenge and say "Disciplinary action has and will be taken against those who participate in this behavior as part of our Students Rights and Responsibilities."

A Stafford County Public School spokesperson says SCPS is aware of Tik Tok challenge incidents and they are addressing any instances of vandalism first with parents and the School Resource Officers, and when necessary, through the Code of Conduct.