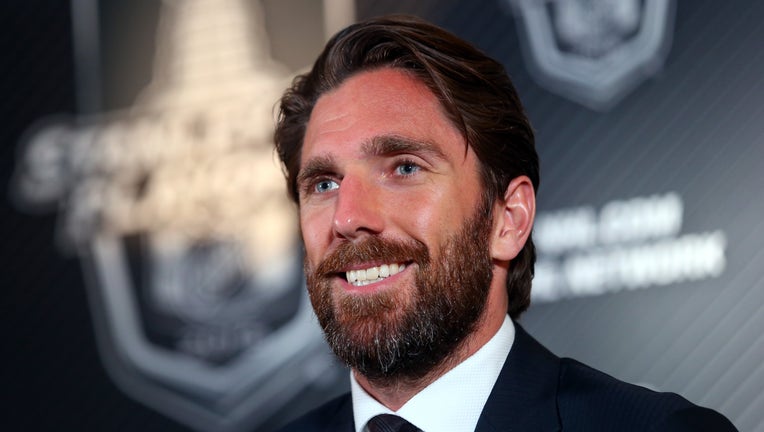 TAMPA, FL - MAY 22: Henrik Lundqvist #30 of the New York Rangers talks to the media after defeating the Tampa Bay Lightning 5 to 1 in Game Four of the Eastern Conference Finals during the 2015 NHL Stanley Cup Playoffs at Amalie Arena on May 22, 2015

WASHINGTON (AP) - Henrik Lundqvist is joining a team he tormented in the playoffs for years, Braden Holtby is leaving the franchise he led to the Stanley Cup, and Anton Khudobin is staying home, after all.

Lundqvist will continue his pursuit of the Cup with the Washington Capitals after signing a $1.5 million, one-year deal with one of the New York Rangers' top rivals. The 38-year-old Swede was bought out by the New York Rangers after 15 seasons and will now play with Alex Ovechkin and help Washington try to win it all again.

“Henrik is one of the greatest goaltenders in NHL history, and we are pleased to have him join our organization,” Capitals general manager Brian MacLellan said. “Henrik has the competitive drive and the ability to help our team compete for a championship. We feel he will be an excellent fit for our team and provide leadership to our organization and our young goaltenders."

The longtime face of the Rangers will split duties in net with 23-year-old goalie of the future Ilya Samsonov. Washington added Lundqvist to replace 2016 Vezina Trophy and 2018 Stanley Cup winner Braden Holtby, who left to sign an $8.6 million, two-year deal with the Vancouver Canucks.

“Braden has built a legacy both on and off the ice that will have a lasting impact on our organization and on our community,” MacLellan said. “Winning the Vezina Trophy in 2016, the Jennings Trophy in 2017 and helping the team win the Stanley Cup with his stellar play in 2018 cements his position as one of the best goalies of his era. Off the ice, he led by example and consistently made a positive impact across several important initiatives.”

Holtby will count $4.3 million against the salary cap the next two seasons and could be a top option for the Seattle Kraken in the 2021 expansion draft because Vancouver has Thatcher Demko.

Khudobin, who famously yelled in the Dallas Stars locker room after winning the Western Conference, “We're not going home!” signed for three years and $10 million to stay. The 34-year-old goaltender led the NHL with a .930 save percentage during the regular season and carried the banged-up Stars to the Cup Final in the Edmonton bubble with a .917 and 2.69 goals-against average playoffs.

Salary cap-strapped Dallas circled back to Khudobin after he tested the market in free agency.

“Anton’s play over the past two seasons has been nothing short of exceptional,” GM Jim Nill. “The immense skill and unmatched work ethic we’ve known Anton possess were on display for the entire hockey world to see during the Stanley Cup playoffs. His impact on our team has been immeasurable and we’re excited for Anton to continue his success with the Stars.”

In other goaltending movement, Cam Talbot left the Calgary Flames to sign an $11 million, three-year contract with the Minnesota Wild. Minnesota traded former starter Devan Dubnyk to San Jose earlier in the week.

Lundqvist didn't last long as a free agent. The veteran of 887 NHL regular-season and 130 playoff games over his career is still trying to win the Cup for the first time. He backstopped Sweden to an Olympic gold medal in 2006 and a silver in 2014 and won the Vezina as the league's top goalie in 2012.

While Washington won it all with Holtby in 2018, Lundqvist endured a Rangers rebuild that saw him rotated in a three-goalie carousel with Igor Shesterkin and Alexandar Georgiev. He hadn't played in the playoffs since 2017 until two games in the qualifying round of the expanded, 24-team playoffs this past summer.

“A new journey begins with ONE goal in mind,” Lundqvist tweeted. “I’m really excited and grateful for the opportunity.”