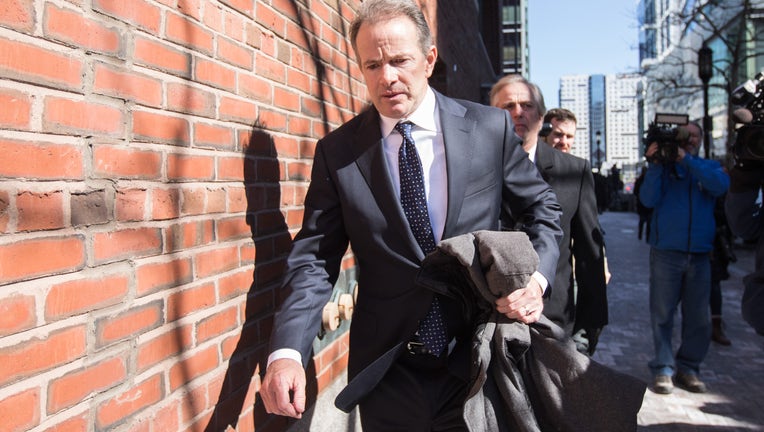 A former Georgetown University tennis coach who once coached former President Barack Obama’s family was sentenced Friday to 2 1/2 years in prison for pocketing more than $3 million in bribes in exchange for helping wealthy parents cheat their kids’ way into the school.

The sentence for Gordon Ernst is by far the toughest punishment handed down so far in the sprawling college admissions bribery scandal that shined a light on the lengths some rich parents will go to get their kids into the nation’s most selective schools.

Prosecutors had sought four years behind bars for Ernst, 55, who admitted to accepting nearly $3.5 million in bribes over a decade to designate the children of deep-pocketed parents as recruits even though they weren’t Georgetown-caliber players.

Ernst told the judge in Boston’s federal court that he lost his moral compass and acted out of line with what he taught his own players about making the right choices.

"I’m most ashamed that I didn’t follow what I was preaching to them," he said.

In a letter to the judge, Ernst described growing up in Rhode Island with a demanding and physically abusive father — another Rhode Island tennis legend, the late Dick Ernst — whom he called more a "coach and tyrant than a dad." Ernst’s mother told The Boston Globe that her husband was never abusive.

PAST COVERAGE: Felicity Huffman reports to prison in NorCal to serve sentence in college admissions scandal

Ernst played hockey and tennis at Brown University in Providence before getting coaching jobs at Northwestern University and the University of Pennsylvania. He was offered the head men and women’s tennis coach job at Georgetown in 2006 and was introduced by a friend two years later to admissions consultant Rick Singer, the mastermind of the bribery scheme, Ernst told the judge.

Of the six spots Ernst got every year to recruit tennis players, he regularly gave at least two — and often up to five — to unqualified students in exchange for bribes, according to prosecutors. Over the years, he helped nearly two dozen students fraudulently get into the school, Assistant U.S. Attorney Kristen Kearney told the judge.

And unlike some of the other coaches charged in the case who were bribed in the form of money for their sports programs, Ernst pocketed almost all of the money for himself, prosecutors said. He used the bribe money to pay for his daughters’ expensive private school tuition and buy a home on Cape Cod, Kearney said.

RELATED: Father gets 4 months for bribing son's way into Georgetown

Defense attorneys asked the judge for a sentence of about a year, saying in court papers that Ernst, like the tragic Greek mythological figure Icarus, "flew too close to the sun and forgot his wings were made of wax."

Surrounded by families with wealth and prestige at Georgetown, Ernst — whose starting salary was $55,000 — told himself he wasn’t hurting anyone or his team by accepting the bribes, his lawyers wrote.

Ernst has tried to turn his life around since his 2019 arrest and has worked part time as a tennis instructor, hockey referee, and a rental car cleaner, Ernst’s lawyers said.

"Gordie has fallen from the White House to the tabloids – a fall from grace far longer than the Court sees in a typical case," his lawyers wrote.

U.S. District Judge Indira Talwani called Ernst’s actions "egregious," and said they appeared to stem from a desire to portray himself as someone with wealth because that’s what he viewed as the measure of success.

A Georgetown University alumnus has acquired 15,000 signatures on an online petition calling on the school to revoke the degrees from graduates who were involved in the alleged college admissions scandal.

Ernst left Georgetown in 2018 after an internal investigation launched over what the school described as "irregularities in the athletic credentials" of students he was recruiting concluded that he violated admissions rules.

He was later hired by the University of Rhode Island, which claimed it wasn’t told about the admissions rules violations. He resigned from that school shortly after his arrest.

Ernst is among 54 people who have been convicted in the Operation Varsity Blues case that exploded into headlines in March 2019.

The last defendant linked to the investigation to go to trial was acquitted by jurors on all counts last month. Another defendant was pardoned by former President Donald Trump and a third defendant got a deal that’s expected to lead to the dismissal of his case.

Before Friday, the toughest punishment had been 15 months in prison for John Wilson, a former Staples Inc. executive convicted by jurors of paying $220,000 to have his son designated as a University of Southern California water polo recruit and an additional $1 million to buy his twin daughters’ ways into Harvard and Stanford. Wilson maintains that he is innocent and remains free while he appeals his case.

Only a handful of defendants remain to be sentenced.

They include the scheme’s mastermind, Singer, who pleaded guilty in 2019 to a slew of charges. Singer secretly began cooperating with investigators before the case became public and helped the government build the massive prosecution. He’s expected to be sentenced in September.