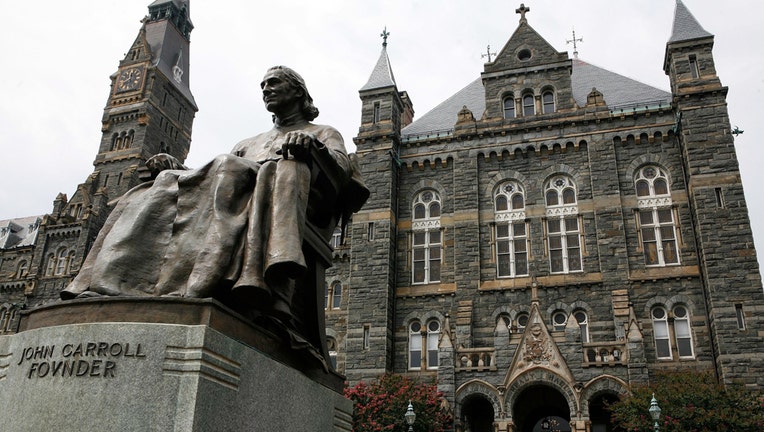 BOSTON (AP) - A Los Angeles businessman was sentenced Thursday to four months in prison for paying $400,000 to get his son into Georgetown University as a fake tennis recruit.

Stephen Semprevivo, 53, pleaded guilty in May to fraud and conspiracy. He is the third parent sentenced in a college admissions scandal that has ensnared dozens of wealthy mothers and fathers.

Authorities say Semprevivo conspired with admissions consultant William "Rick" Singer to get his son into Georgetown as a tennis recruit, even though he did not play the sport competitively. His son was admitted in 2016 but was expelled over the scheme earlier this year.

Semprevivo was also sentenced to two years of supervised release, 500 hours of community service, a $100,000 fine and possible restitution to Georgetown. Prosecutors had asked for 13 months in prison.

"I'm fully responsible and take full responsibility for my actions, and feel I should be punished," Semprevivo said in a tearful apology to the judge.

In an Aug. 17 letter asking for leniency, Semprevivo said he was driven by "foolish ambition" for his son's happiness. He said he was drawn into the scheme by Singer.

"Looking back, I can see that Rick Singer worked me over and got me to do and believe things I am ashamed of and deeply regret," Semprevivo wrote. "I wanted the future for my son that he had worked so hard for. This was the main factor in my bad judgment."

He was accused of paying $400,000 to a sham charity operated by Singer in 2016. Authorities say Singer then bribed Georgetown tennis coach Gordon Ernst to label Semprevivo's son and the children of other Singer clients as recruited athletes. Singer has pleaded guilty. Ernst, who was fired by Georgetown, pleaded not guilty.

Days after Semprevivo pleaded guilty, his son sued Georgetown in an attempt to block his expulsion, saying the school was unfairly trying to discipline him for a scheme that it "knew or should have known about" for two years. The lawsuit was withdrawn in July.

Prosecutors said Semprevivo deserved prison time because he paid one of the highest bribes and enlisted his son in the scheme. They said he showed a "disturbing lack of remorse" by describing himself as a victim of Singer.

An entrepreneur who has spent much of career at technology companies, Semprevivo said he lost his job over the scandal and has been unable to find new work. Most recently he was executive vice president of Cydcor, a California group that helps companies outsource their sales teams.

Fifteen parents have pleaded guilty in the scheme, while 19 are contesting the charges, including "Full House" actress Lori Loughlin and her fashion designer husband, Mossimo Giannulli. They are accused of paying $500,000 to get their two daughters into USC as fake athletes.

"Desperate Housewives" star Felicity Huffman became the first parent sentenced after admitting to paying $15,000 to rig her daughter's SAT score. She was sentenced to 14 days in prison.