LANDOVER, Md. - Teammates approached Patrick Mahomes after his second interception in the first half and maybe the worst of his NFL career. They told him to keep being himself.

Mahomes found himself in the second half, engineering three touchdown drives to make up for the giveaways, leading the Kansas City Chiefs to a 31-13 comeback victory at Washington on Sunday that got them back to .500.

"In the second half, I kept doing stuff," said Mahomes, who threw for 397 yards and two touchdowns. "I kept throwing across my body and doing a lot of different type of stuff because I know those guys believe in me, and I’m going to keep being that and keep fighting to the end." 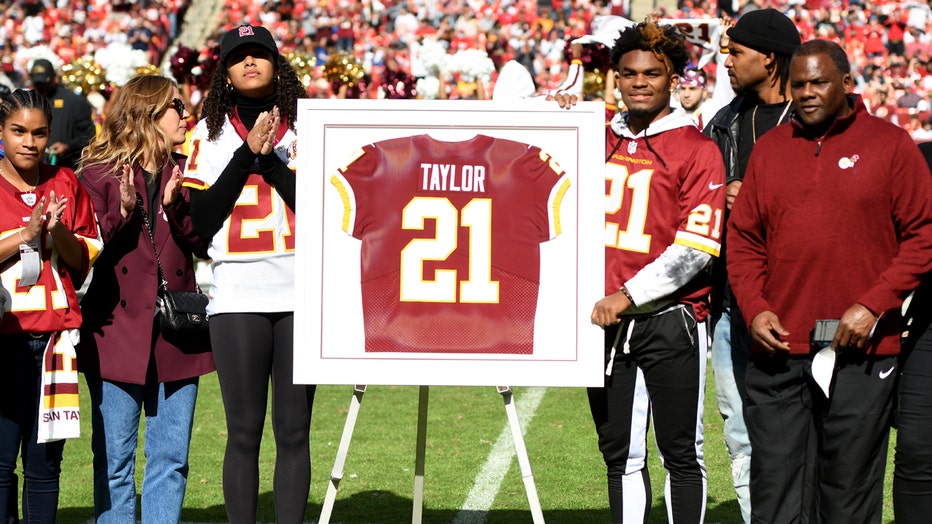 Family and friends of Sean Taylor stand during the retirement ceremony of Taylor's jersey at FedExField on October 17, 2021 in Landover, Maryland. (Photo by Mitchell Layton/Getty Images)

Leaving his seventh and eighth picks of the season behind, Mahomes connected with Tyreek Hill on a 2-yard touchdown pass late in the third quarter. He put the game out of reach with a 24-yarder to Demarcus Robinson with 3:14 left in the fourth period.

In between, new starting running back Darrel Williams rushed for his second TD of the game to help Kansas City (3-3) avoid what would have been an embarrassing loss.

"We just executed better," Mahomes said. "Guys relied on each other, believed in each other, and we were able to find a way to get a win."

The defense also finally played its part, holding an opponent under 29 points for the first time this season, forcing a fumble and picking off Taylor Heinicke to seal the win. Washington (2-4) finished with 276 yards and its lowest points total of the season.

"We didn’t handle adversity in the second half the way we needed to," Washington coach Ron Rivera said. "When you have a chance, you've got to take advantage of it. And we didn’t."

The Chiefs flirted with disaster for much of the first half, turning the ball over three times: a ball that bounced off Hill's hands, a fumble by receiver Mecole Hardman, and an inexplicable heave by Mahomes. They trailed 13-10 at halftime before things clicked offensively.

Kansas City now has committed an NFL-worst 14 turnovers this season, a worrying trend for the defending AFC champion.

"We got to get out of this cycle," coach Andy Reid said. "I’m not sure I've been around quite this many, but we’re here, so it needs to change. But we were heading the right direction that second half."

Unlike losses to the Ravens, Chargers and Bills, the offense made up for the giveaways. Mahomes was 32 of 47 through the air, rushed for 31 yards and led touchdown drives of 95, 68, 45 and 96 yards.

"The way we did it, even though it wasn't pretty in the first half, hopefully it will get us rolling," said Mahomes said. "How this season’s gone and the adversity we’ve dealt with, it could have spiraled. "But I thought the guys, it was a lot of mental toughness to go back and to battle."

Rivera was caught on a hot microphone complaining to officials in the waning minutes of the game. Rivera could be heard making a mention of the offensive line and using an expletive to say he didn't care.

Washington's defense that forced three turnovers in the first half gifted Kansas City points because of bad penalties later on.

Pass rusher Montez Sweat was flagged offside with the Chiefs in the red zone to negate a third-down stop on the drive that ended with the Mahomes to Hill TD. Linebacker Khaleke Hudson took a holding penalty in the end zone to set up Williams' second score.

"It’s one I feel like slipped through our fingers a little bit," reigning Defensive Rookie of the Year Chase Young said. "First half we were solid, getting to the quarterback, forcing turnovers. We got to look at it."

Washington retired late safety Sean Taylor’s No. 21 at halftime after the team was criticized by alumni and fans for not announcing the tribute until Thursday. Members of Taylor's family took part in a pregame ceremony naming a road leading to the stadium after him and surrounded a framed burgundy jersey on the field when his number was retired.

Team president Jason Wright issued a public apology for bungling the situation and not providing enough notice to those interested in attending the tribute to Taylor, a beloved figure in franchise history who was murdered in 2007 at his Florida home during a botched burglary attempt.

Fans, many in Taylor jerseys holding "21" towels, chanted his name as the festivities were coming to an end.

Chiefs: TE Jody Fortson was carted off in the third quarter with a torn left Achilles tendon. ... LB Anthony Hitchens injured his right elbow on a hit in the second period that was flagged for unnecessary roughness. He's set to have an MRI Monday. ... LG Joe Thuney played a second consecutive game with a broken right hand.