WASHINGTON - The support for Buffalo Bills safety Damar Hamlin has stretched far past the NFL, especially in the Buffalo community.

The Buffalo Sabres showed love and support for Hamlin and the Bills soon after the safety collapsed due to cardiac arrest against the Cincinnati Bengals on Monday night, and they continued to do so with custom t-shirts worn before their game against the Washington Capitals on Tuesday night.

Damar Hamlin is in critical condition after he collapsed on the field during Monday's Buffalo Bills-Cincinnati Bengals game, according to a statement from the National Football League.

Members of the Sabres were seen walking into Capital One Arena in Washington D.C. with shirts that read "Love for 3," which pays homage to Hamlin’s jersey number with the Bills.

The Sabres’ Twitter account also shared a new avatar, which says "Pray For Damar" with his No. 3 as well. It is the avatar that every NFL account changed to, showing unity in this tough moment. 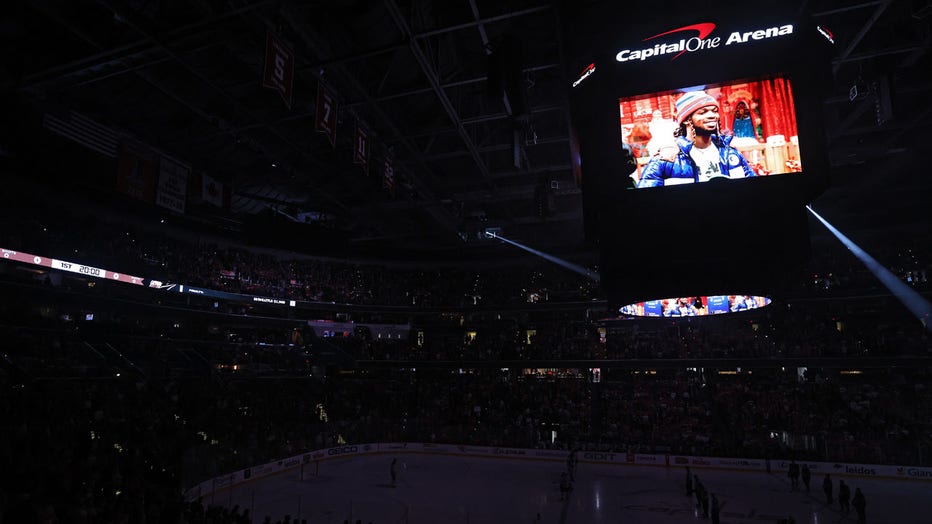 Buffalo Bills safety Damar Hamlin is projected on the scoreboard before the Buffalo Sabres play against the Washington Capitals at Capital One Arena on January 3, 2023 in Washington, DC. Hamlin remains in critical condition Tuesday after suffering ca

"All of Buffalo and #BillsMafia is with you, Damar. Praying for you," the Sabres account tweeted following Hamlin’s injury on Monday night.

The Bills provided an update on Hamlin recently, saying he remains in critical condition after spending the night in the University of Cincinnati Medical Center’s intensive care unit.

Hamlin collapsed on the Paycor Stadium turf around 8:55 p.m. on Monday night. The Bills confirmed what multiple reports were saying, that Hamlin suffered cardiac arrest and needed to have his heart restored on the field before being transferred to the hospital for further treatment.

The incident occurred on the Bengals’ second drive, where quarterback Joe Burrow found wide receiver Tee Higgins for a completion. Hamlin and other Bills were in pursuit to tackle Higgins, who eventually lowered his shoulder into Hamlin’s chest.

After initially getting up, Hamlin collapsed to the turf and medical staffs from both teams sprinted out to give him attention. He received CPR before he was put in an ambulance.

Bills and Bengals players were noticeably shook up from what they saw on the field, some of which broke out into tears. Others began praying for their teammate and NFL brother, as no one knew the extent of what was wrong.

The Bills-Bengals game was postponed and no word as been made from the league as to what happens next.

All focus is on Hamlin.