FOX 5's Sue Palka is here with the latest on Wednesday's winter storm that could bring snow, rain, and a wintry mix to the DC region.

Various weather models have all been struggling to get a good handle on exactly where the all-important rain/snow line will be draped across our region, and how far to the northwest it will progress throughout the course of the day.

Overnight models were a little farther northwest with it by the middle part of the afternoon, so as a result, we did pull back totals just a touch around the region. Still, for a month that is not particularly known for big snows, as D.C. only averages 2.3" of snow in December, forecast snow totals north and west are still rather impressive for such an early season storm. 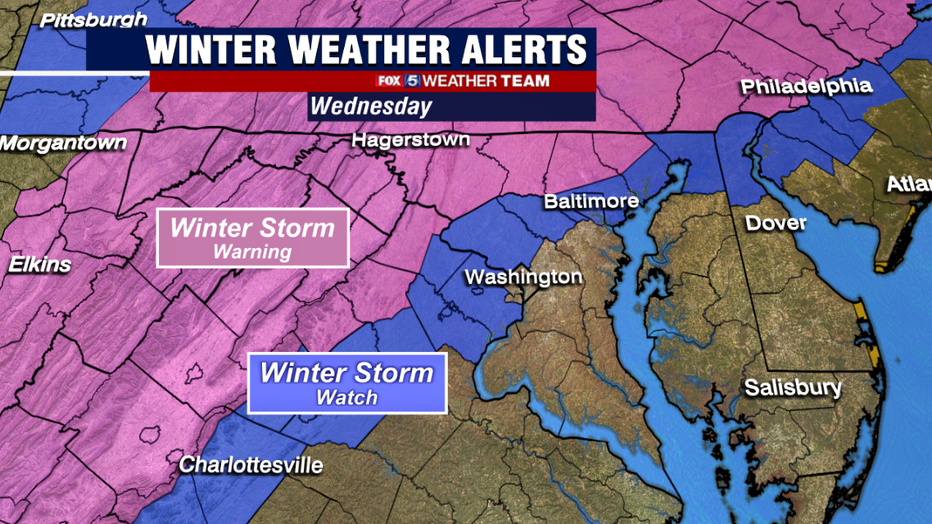 This morning, the National Weather Service issued winter storm warnings across many of our western zones, indicating that 5 or more inches of sleet and snow is expected in the warnings zones throughout the day on Wednesday.

Counties just to the south and west of D.C., including Fairfax, Montgomery, and Prince William counties all remain under winter storm watches at this time, meaning the potential exists for 5 inches or more, but confidence is lower on those amounts in those regions at this time. 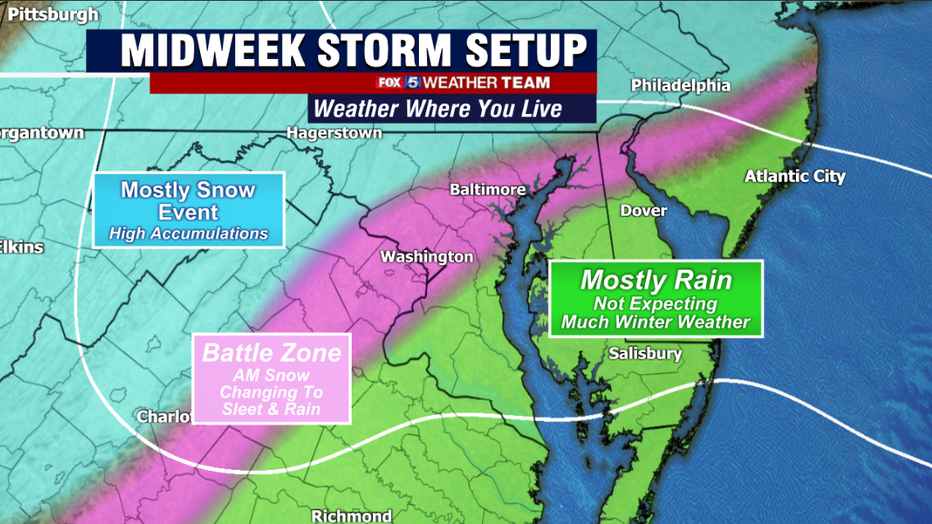 So how will it all play out? Here is the general timeline that we anticipate for this winter storm in our area on Wednesday:

8 a.m. - 10 a.m.: Precipitation starts to push into the region from south to north. Temperatures should be cold enough, and air dry enough, that it should begin as snow even within and east the beltway region.

10 a.m. - 12 p.m.: Likely a period of moderate snow in D.C. with even some snow/mix for the Eastern areas. D.C. could pick up a quick inch or two while eastern zones like Charles, Prince George's, Calvert, Anne Arundel, could all start the day off with some sleet and snow and perhaps even put down a quick grassy coating to half an inch. Western areas see steady snow with accumulations beginning.

12 p.m. - 3 p.m.: Southern and eastern zones switch over to rain as the storm get closer to the region and intensifies. The beltway region sees snow change to a mixture of rain, snow, and sleet while western zones continue to pick up on snowfall.

Frederick County in Maryland is expected to be one of the hardest hit areas in our region! The city of Frederick has declared a snow emergency tonight. All city offices and non-essential operations are closed, and school is all virtual on Wednesday.

3 p.m. - 7 p.m.: The rain/snow line will continue to march northwest. Should be all a cold rain for D.C. and eastern areas by this time. The rain snow line is expected to push its way towards the Blue Ridge by this time, cutting back on some snow totals in the northwest zones as they do some mixing.

7 p.m. - 12 a.m.: As the sun sets and the storm system pulls to our north, cold air should wrap around the system and the rain/snow line should progress back to the south and east. Models are split with how much snow would accumulate on the back side of the system, but there is the threat that local areas around the beltway could pick up an additional coating to an inch or two if precipitation remains heavy enough into the late evening hours of Wednesday. 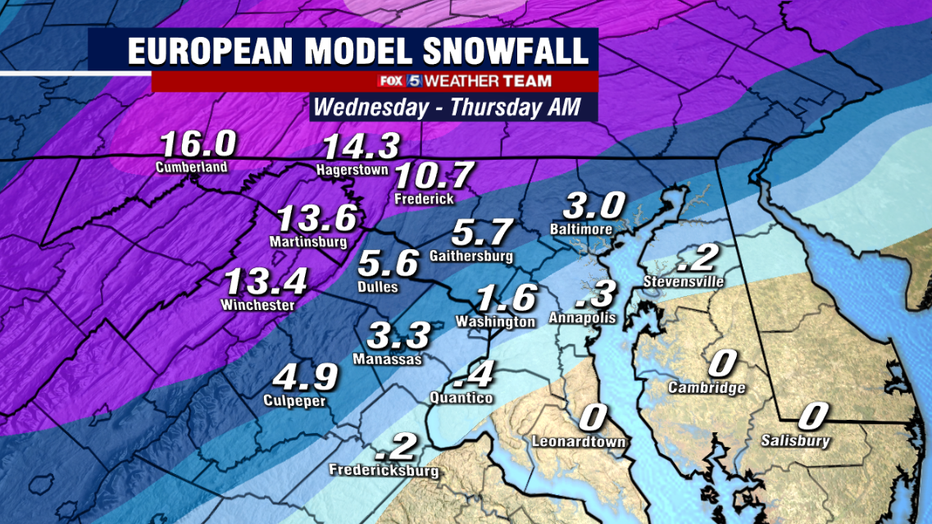 The biggest shift in the overnight modeling was mostly how far to the north and west the rain/snow line is now expected to make it during the afternoon, with the threat for mixing as far north as Frederick and Martinsburg by the late afternoon hours. This led us to drop forecast totals by a few inches in these regions, though those areas should still see plenty of snow on the front side of the system during the late morning and early afternoon hours. 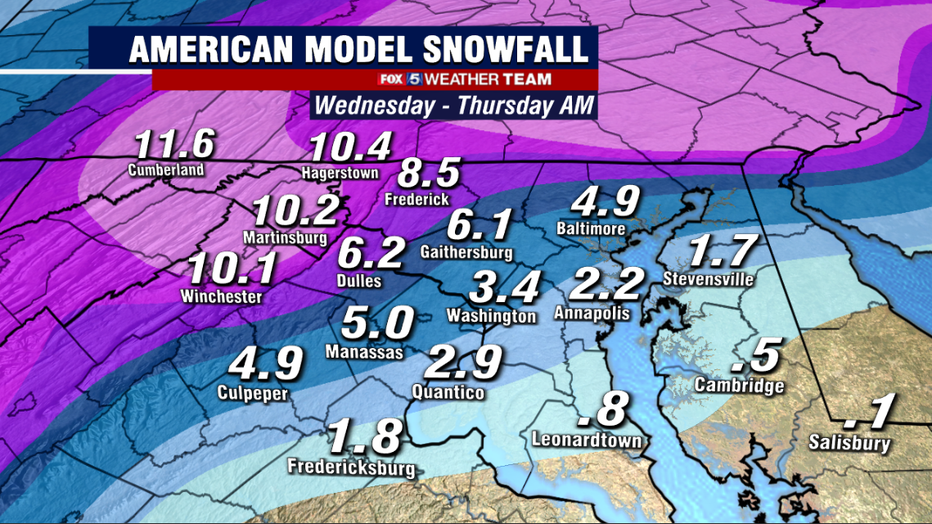 One question that remains and that weather models do tend to handle rather poorly is the strength of the cold air mass that will be in place during the morning hours.

Many times, weather models do try to "rush" this cold air out of the region a little too quickly as the storms come northward. If this is the case, it would result in a slower progression of the rain/snow line northwest, and slightly higher snowfall totals locally.

FOX 5’s Josh Rosenthal is in Sterling, Virginia, where they’re preparing for what could be more snow than we’ve seen in years.

Another question is does precipitation stick around long enough that we are able to pick up more on the backside of the system as it pulls away late Wednesday night.

These are just a few of the details we will be hammering out throughout the day.

Keep it to FOX 5 for the very latest! The Weather Team is here to keep you informed throughout the duration of this early season winter storm.