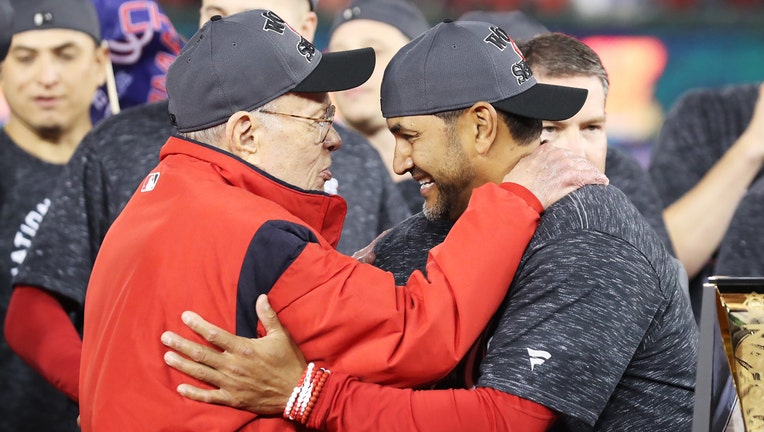 Owner Ted Lerner and Manager Dave Martinez #4 of the Washington Nationals celebrate after winning game four and the National League Championship Series against the St. Louis Cardinals at Nationals Park on October 15, 2019 in Washington, DC. (Photo by

WASHINGTON - Ted Lerner celebrated his 94th birthday in the best way possible Tuesday as the Washington Nationals punched their ticket for a trip to the World Series.

The Lerner family have been the principal owners of the team since the franchise moved to D.C. Ted was born in the District in 1925 at a time when the old Washington Senators were still in town. A year before he was born, the Senators won their only World Series title while they were based in Washington. The last time the World Series came to the nation's capital was 1933, when the Senators lost to the New York Giants in five games.

In 1960, the old Washington Senators relocated to Minnesota and became the Twins. They were replaced by an expansion Senators team in 1961 who would become the Texas Rangers in 1972.

Ted's son, Mark Lerner was named principal owner of the team in 2018.

The Nationals will have a week to prepare for their first World Series after sweeping the St. Louis Cardinals. They will face the winner of the ALCS between the New York Yankees and the Houston Astros.