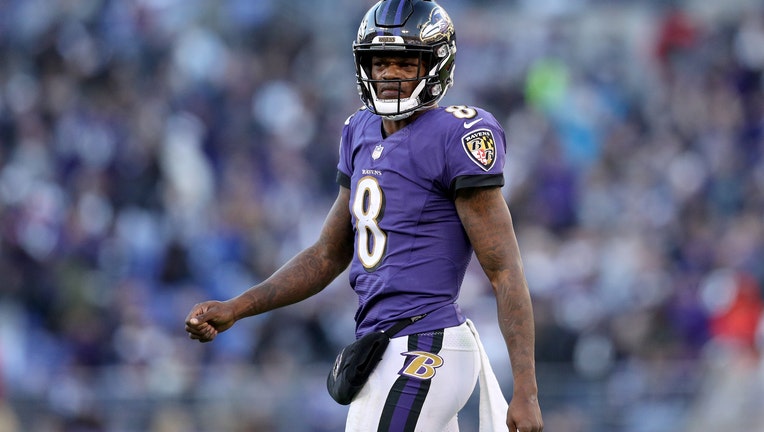 BALTIMORE, MARYLAND - JANUARY 06: Lamar Jackson #8 of the Baltimore Ravens reacts after a play against the Los Angeles Chargers during the fourth quarter in the AFC Wild Card Playoff game at M&T Bank Stadium on January 06, 2019 in Baltimore, Mary

Last year's NFL MVP is the biggest star to become infected by the virus.

The Baltimore Sun and ESPN, both citing unidentified sources, reported that Jackson was among four more Ravens players to test positive Thursday.

Outside linebacker Pernell McPhee was placed on the reserve/COVID-19 list Wednesday, joining running backs Mark Ingram and J.K. Dobbins and defensive tackle Brandon Williams. Because of the outbreak, the Ravens have been conducting team work remotely.

The Ravens also said Wednesday they had disciplined a staff member, reportedly a strength coach, for not obeying league protocols.

Baltimore (6-4) was supposed to play the unbeaten Pittsburgh Steelers (10-0) on Thursday night, but the game was postponed until Sunday. The latest round of positive tests could jeopardize the game being played this weekend.

Backup quarterback Robert Griffin III would be the most likely candidate to start for Baltimore in place of Jackson. The No. 2 overall pick in the 2012 draft, Griffin has made only one start in the past four seasons.

“Praying for my brother @Lj_era8 and every player, staff member and their families dealing with COVID-19,” Griffin tweeted Thursday. “Ensuring the safety of the entire organization is important. Handling this outbreak within the team is bigger than football."