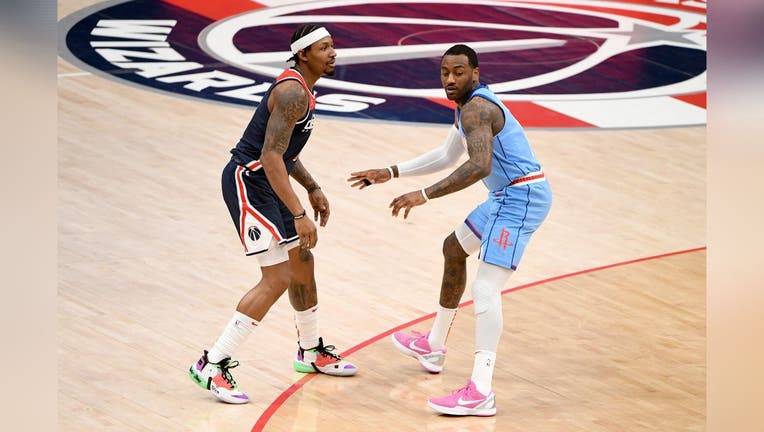 Bradley Beal #3 of the Washington Wizards and John Wall #1 of the Houston Rockets look on during the second half at Capital One Arena on February 15, 2021 in Washington, DC. (Photo by Will Newton/Getty Images)

WASHINGTON - Bradley Beal scored 37 points in an entertaining duel with ex-teammate John Wall, and the Wizards beat the undermanned Houston Rockets 131-119 on Monday night in Wall's return to Washington.

Wall, traded in December for Russell Westbrook and a first-round pick, had season highs of 29 points and 11 assists for the Rockets, who were missing leading scorer Eric Gordon along with Victor Oladipo, Christian Wood and P.J. Tucker. Houston dropped its sixth straight.

Westbrook had 16 points, 15 assists and 13 rebounds for his sixth triple-double of the season — his first in a Wizards win — and 152nd of his career. But it was a largely inefficient performance from the former MVP, who shot 8 of 22 overall, 0 of 3 from 3-point range and airballed a 20-foot jumper. Westbrook played on back-to-back days for the first time this season.

READ MORE: Wizards to face John Wall tonight for the first time since he was traded

Davis Bertans added 18 points on 5-of-6 3-point shooting for Washington, which won consecutive games for the first time this season.

Houston kept it close against Washington's league-worst defense before the Wizards wore down the Rockets, who had only 10 players dressed for the game. Washington finally started to pull away with an 11-2 run late in the third quarter.

Wall went to the bench early in that run. He returned with 7:28 left in the fourth quarter and the Rockets trailing by 13, and Houston could not get closer than eight points the rest of the way.