ATLANTA - With a flair for improvisation, Taylor Heinicke has been pulling off these sort of bizarre plays most of his life.

To do it in front of family and friends really made it special.

Heinicke ad-libbed a 30-yard touchdown pass to J.D. McKissic with 33 seconds remaining, rallying the Washington Football Team to a 34-30 victory over the Atlanta Falcons on Sunday. 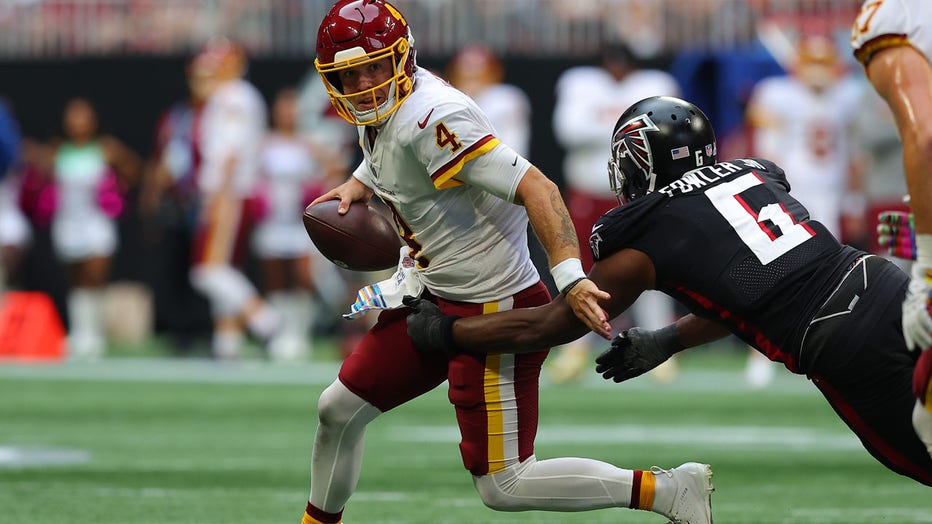 Quarterback Taylor Heinicke #4 of the Washington Football Team runs with the ball away from Dante Fowler Jr. #6 of the Atlanta Falcons in the second half at Mercedes-Benz Stadium on October 03, 2021 in Atlanta, Georgia. (Photo by Kevin C. Cox/Getty I

Returning to the metro area where he grew up, Heinicke completed 23 of 33 passes for 290 yards and three touchdowns — two of them in the final 3:52 to give Washington (2-2) the victory.

Both were vintage Heinicke, seemingly created out of thin air.

"I feel like I've kind of been doing that, those kind of plays, throughout my life," he said. "That's the kind of player I am. Hey, I grew up watching Brett Favre. I saw a lot of crazy stuff from him."

First, Heinicke eluded Dante Fowler Jr. and delivered an off-balance throw with another rusher in his face that Terry McLaurin, slipping away from two defenders, managed to catch in the back of the end zone for a 17-yard TD.

"No play is ever dead when Taylor's back there," said McLaurin, who finished with six catches for 123 yards. "I just knew Taylor was gonna give me a chance."

Two missed extra points by Dustin Hopkins forced Washington to go for a 2-point conversion. It failed, preserving a 30-28 lead for the Falcons (1-3).

After the Washington defense forced a punt, Heinicke guided his team into field-goal range.

As it turned out, Hopkins wasn't needed.

Rolling to his left, Heinicke didn't see anyone open among four possible targets. McKissic slipped out into the right flat with no one around, Heinicke spotted him, and made a daring throw back across the field.

"He was the fifth read," Heinicke said. "No one was open, so I needed to make a play."

McKissic broke a diving attempt by Deion Jones — the only guy with a chance to make a tackle — took off down the sideline and dove over the pylon for the winning score.

Heinicke's heroics ruined a big day for Atlanta's Cordarrelle Patterson, who became the first Atlanta player since 2018 to score three touchdowns in a game.

Patterson hauled in a 42-yard pass from Matt Ryan for Atlanta's longest play from scrimmage this season, giving the Falcons an early 10-0 lead.

He added touchdown catches of 12 and 14 yards.

Ryan threw four TD passes, also connecting with Mike Davis on a 7-yard scoring play that stretched Atlanta’s lead to 30-22. A disputed personal foul penalty on Chase Young allowed the Falcons to keep the ball after they appeared to be stopped on fourth down.

Heinicke's first TD pass was a a 33-yarder to McLaurin in the second quarter,

Washington: TE Logan Thomas was knocked out of the game in the first quarter with a hamstring injury. ... OG Brandon Scherff hobbled to the locker room in the third quarter with a knee injury after blocking on a 21-yard field goal by Hopkins. He did not return. ... LB Jon Bostic (shoulder) and WR Cam Sims (hamstring) were also injured on a tough day physically for the visiting team.

Falcons: CB Isaiah Oliver was carted off the field in the first half with a knee injury and didn't return. ... P Cameron Nizialek injured his right hamstring while kicking off. He was able to limp back on the field to do the holding for kicker Younghoe Koo on an extra point, but Koo had to take over the kickoff and punting duties the rest of the game.

Receiver Curtis Samuel finally made his debut for Washington after being activated off injured reserve.

Samuel missed the first three games because of a groin injury that has slowed him since late spring. He made four catches for 19 yards.

"It was exciting to be back on the field," said Samuel, who spent four years in Carolina before signing with Washington in free agency. "I’m happy we got the win."

Patterson, who lines up at running back and receiver along with returning kicks, has emerged as one of the league's most dynamic players.

He led the Falcons in receiving and rushing, finishing with five catches for 82 yards and six carries for 34 yards. He also averaged 26 yards on three kickoff returns.

"When my number is called, I just go out and try to make a play," Patterson said "I'd give all this back to get a win. It’s not about what I did. It’s about this team."

Washington’s touted defense continues to struggle, giving up 374 yards and 24 first downs to one of the league’s lowest-ranked offenses.

Third downs were a big problem. The Falcons converted on 10 of 16 chances.

Safety Bobby McCain got into a testy exchange with Washington media over the team’s defensive struggles.

Falcons: Head to London next Sunday to take on the New York Jets at Tottenham Hotspur Stadium.