BETHESDA - A Virginia man is dead following a deputy-involved shooting in Riverside, California after police say he traveled there to meet a female teenager he met online and murdered her grandfather, grandmother and mother.

Riverside Police officers were dispatched for a welfare check of the female teenager on Friday around 11 a.m. Witnesses said she appeared distressed while getting into a red Kia Soul with a man in the La Sierra South neighborhood.

While officers were responding, multiple calls came in about a structure fire a few houses down from where the welfare check call originated.

The Riverside Fire Department discovered three adult victims in the front entryway while responding to the working fire on the first floor of the house. It was determined they were victims of an apparent homicide.

The victims were identified as Mark Winek, 69, his wife Sharie Winek, 65, and their daughter Brooke Winek, 38. Their cause and manner of death are pending. The cause of the house fire is also under investigation, although officials say it appears to have been set intentionally.

Police determined the female teenager described in the welfare check call was a teenager who lived where the house fire and homicides occurred. The man she was accompanied by was eventually identified as Austin Lee Edwards, 28, of North Chesterfield, Virginia. 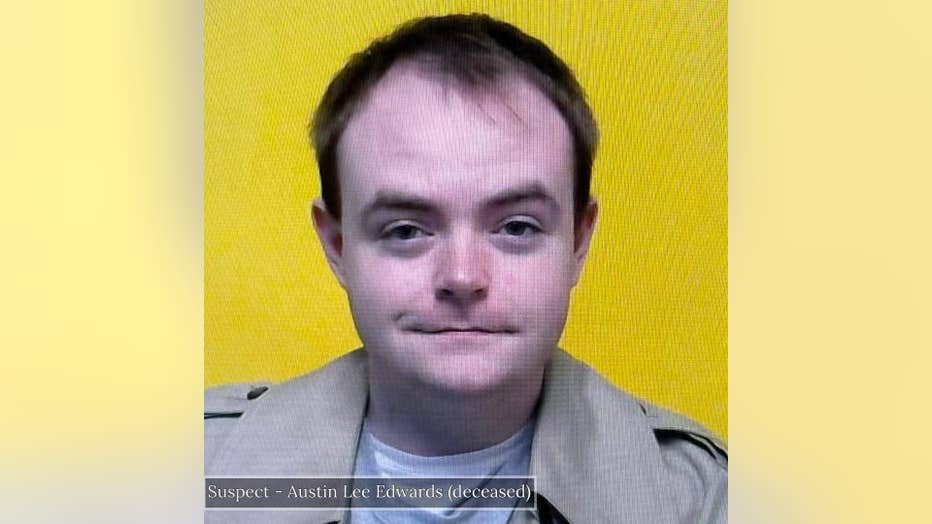 Detectives sought warrants for his arrest. He was discovered several hours later driving with the teen through San Bernardino County when he was located by the San Bernardino County Sheriff’s Department. Edwards fired gunshots at deputies and a deputy-involved shooting occurred where he was subsequently pronounced dead at the scene.

The teen was unharmed and later placed into protective custody.

Detectives determined Edwards had met the female teenager through catfishing. It is believed Edwards had developed an online relationship with the teen and obtained her personal information.

He traveled from Virginia to Riverside where he parked his car in a neighbor’s driveway and walked to the teen’s home. At some point, he murdered the teen’s grandfather, grandmother and mother before walking back to his vehicle with the teen and leaving.

Detectives learned Edwards had worked for the Virginia State Police until recently employed at the Washington County Sheriff’s Office in Virginia.

"Our hearts go out to the Winek family and their loved ones during this time of tremendous grief, as this is a tragedy for all Riversiders," stated Riverside Police Chief Larry Gonzalez. "This is yet another horrific reminder of the predators existing online who prey on our children. If you’ve already had a conversation with your kids on how to be safe online and on social media, have it again. If not, start it now to better protect them."

This investigation is still ongoing and there are no other details to release at this time, according to police. Anyone with additional and relevant information should call (951) 353-7135 or (951) 353-7105. Information can also be sent via email to JOntko@RiversideCA.gov or BGalbreath@RiversideCA.gov.

Those wishing to remain anonymous can email RPDTips@RiversideCA.gov.