The company said the users were banned for being engaged "in sharing harmful QAnon-associated content at scale and were primarily dedicated to the propagation of this conspiracy theory across the service."

Twitter said the move to eliminate the conspiracy theory proliferating accounts from their platform comes after the violent insurrection that occurred on Jan. 6, when pro-Trump rioters stormed the U.S. Capitol, resulting in the deaths of five people, including a Capitol Police officer.

By removing the accounts from their platform, Twitter said it hopes to "protect the conversation on our service from attempts to incite violence, organize attacks, and share deliberately misleading information about the election outcome."

QAnon has ricocheted around the darker corners of the internet since late 2017, but has been creeping into mainstream politics more and more. The baseless theory centers on an alleged anonymous, high-ranking government official known as "Q" who shares information about anti-Trump government officials, often allegedly tied to Satanism and child sex trafficking.

Trump has retweeted QAnon-promoting accounts, and shirts and hats with QAnon symbols and slogans are not uncommon at his rallies.

Trump was criticized in August when he showed appreciation for support from QAnon conspiracy believers. When asked by a reporter during a White House press briefing what he thought of the movement, Trump responded, "Well, I don’t know much about the movement other than I understand they like me very much, which I appreciate."

QAnon’s influence was evident during last week’s pro-Trump riot as a mob of angry supporters of the president descended on the halls of Congress. Police officers were photographed fending off a man in a "Q" sweatshirt from the Senate chamber. A leading promoter of QAnon was also photographed in Senate chambers wearing bull horns and face paint. 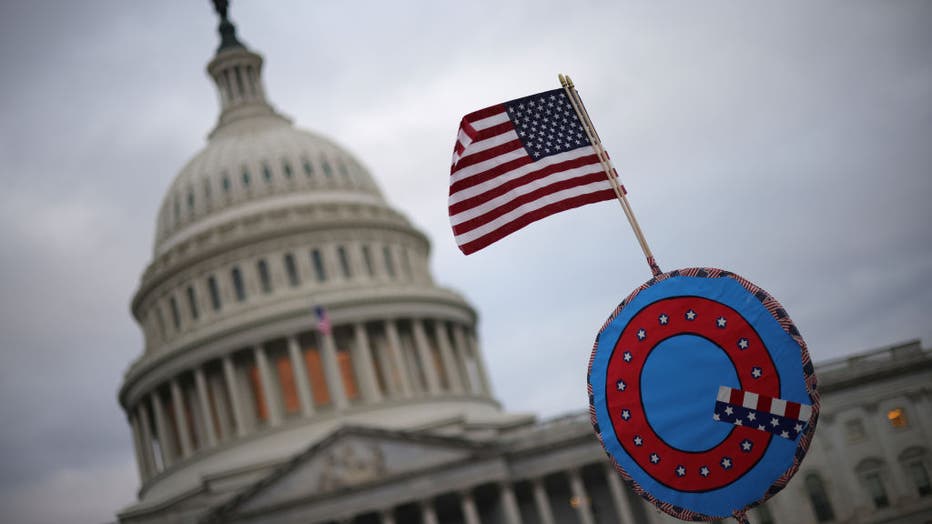 Supporters of U.S. President Donald Trump fly a U.S. flag with a symbol from the group QAnon as they gather outside the U.S. Capitol January 06, 2021 in Washington, DC.

Facebook said in a statement late Wednesday that it was removing photos and videos posted by the mob at the Capitol. Twitter also said it was working to "take action" on threats and calls for violence.

But as the riot continued, QAnon and far-right conservatives used social media to urge followers to "hold the line" and "trust the plan," phrases that were mentioned more than 80,000 times across online media Wednesday and Thursday, according to an analysis by media intelligence firm Zignal Labs.

More than 1 million mentions of "civil war" and "storm the capitol" appeared in Twitter posts, the firm also found. Others called for Vice President Mike Pence — who enraged Trump when he acknowledged that he did not have the power to unilaterally throw out electoral college votes — to be tried for treason.

Many pro-Trump accounts are still using the platforms to celebrate Wednesday’s riot as a success with QAnon hashtags. Others continue to push false conspiracy theories that Trump is the rightful winner of the election.

"WE DID IT! THANK Q PATRIOTS!" one QAnon account wrote on Twitter, moments after Pence was whisked away from Senate chambers for his safety.

While Twitter attempted to permanently silence Trump on their platform by banning his @realdonaldtrump handle, Trump was able to tweet from from the official government @POTUS account four times, ranting against the social media company before the tweets were removed by Twitter.

"As I have been saying for a long time, Twitter has gone further and further in banning free speech, and tonight, Twitter employees have coordinated with the Democrats and the Radical Left in removing my account from their platform, to silence me," Trump tweeted last week.

According to Twitter’s ban evasion policy, if another account was created by Trump and used for the purposes of evading the permanent ban, it would also be subject to permanent suspension. Government accounts including @POTUS and @WhiteHouse would not be suspended unless absolutely necessary in order to alleviate real-world harm, according to the company.

The same policy applies to the 70,000-plus users who were banned Monday.