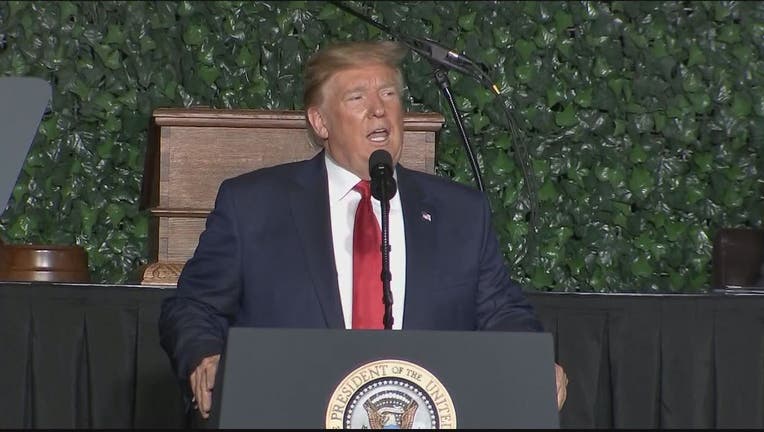 JAMESTOWN, Va. (AP) - President Donald Trump on Tuesday marked the 400th anniversary of the rise of American democracy by celebrating four centuries of commitment to the "righteous cause" of self-government, in a Jamestown speech that was boycotted by black state legislators and bracketed by Trump's comments in Washington continuing to disparage a black member of Congress and his majority-black district.

In his speech, Trump noted that 1619 also was the year the first enslaved Africans arrived in the colonies, saying, "We remember every sacred soul who suffered the horrors of slavery and the anguish of bondage."

Trump said the United States has had many achievements in its history, but "none exceeds the triumph that we are here to celebrate today."

"Self-government in Virginia did not just give us a state we love — in a very true sense it gave us the country we love, the United States of America," he said.

Against the backdrop of Trump's policy of detaining migrants at the U.S.-Mexico border, he was briefly interrupted by a Muslim state lawmaker, Del. Ibraheem Samirah. Samirah, a Democrat, stood and held laminated signs that said "Deport Hate," ''Reunite My Family" and "Go Back to Your Corrupted Home." Samirah later told The Associated Press in an interview that he wanted to protest Trump's policies and rhetoric. The audience chanted "Trump," ''Trump," ''Trump," as Samirah was led out of the speech site, a tent on the lawn of a history museum near the site of the original Jamestown colony.

Republican House Speaker Kirk Cox said Samirah's protest was "inconsistent with common decency and a violation of the rules of the House."

As he departed the White House, Trump said the black Virginia legislators who announced a boycott of the event were going "against their own people."

African Americans continue to be overwhelmingly negative in their assessments of the president's performance. According to Gallup polling, approval among black Americans has hovered around 1 in 10 over the course of Trump's presidency, with 8% approving in June.

A last-minute announcement that the president would participate in the Jamestown commemoration of the first representative assembly in the Western Hemisphere injected tension into an event years in the making. Demonstrators gathered Tuesday morning near the site where Trump would speak to condemn him.

During an emotional ceremony at a Richmond site where a notorious slave jail once stood, members of Virginia's legislative black caucus took turns criticizing Trump as he spoke about 60 miles away.

Del. Delores McQuinn refused to use Trump's name and instead called him "the tenant in the White House." She choked back tears as she said Trump's criticism of minority members of Congress was also aimed at "every person of color in the United States of America." She urged the crowd to "reclaim the soul and fabric of this country."

The boycott followed days of comments by Trump beginning Saturday that referred to Cummings' district as a "disgusting, rat and rodent infested mess." A caucus statement didn't specifically mention Cummings but said Trump's "repeated attacks on black legislators and comments about black communities made him ill-suited to honor and commemorate such a monumental period in history."

Black Caucus chairman Del. Lamont Bagby told the AP that the group of about 20 lawmakers reached a unanimous decision to boycott the event more than a week ago, before Trump began to assail Cummings.

Not every black Virginia elected official stayed away from Trump's appearance: Lt. Gov. Justin Fairfax was on hand as Trump became the first president to address the Virginia Legislature.

Trump tweeted Tuesday before the flight to southern Virginia that "Word is the Democrats will make it as uncomfortable as possible, but that's ok because today is not about them!" Speaking with reporters after he returned to the White House, Trump said the event "was fantastic" despite the one protester.

Trump used the speech to make an optimistic case for America's future, saying "America always gets the job done."

"That is why after 400 years of glorious American democracy, we have returned here to this place to declare to all the world that the United States of America and the great Commonwealth of Virginia are just getting started," he said.

Caucus members also pledged to boycott the rest of a weeklong series of anniversary events.

At a ceremony early Tuesday, Virginia Gov. Ralph Northam sought to reach out to African Americans. A Democrat whose political career was almost destroyed this year by a blackface scandal, Northam noted that while the ideals of freedom and representative government flourished in Jamestown four centuries ago, a ship carrying African people who would be sold into slavery arrived in Virginia just weeks after that first assembly.

"So today, as we hold these commemorations of the first representative assembly in the free world, we have to remember who it included, and who it did not," Northam said. "That's the paradox of Virginia, of America, and of our representative democracy."

Today's Virginia General Assembly, considered the oldest continuously operating legislative body in North America, grew out of the assembly that first gathered in 1619.