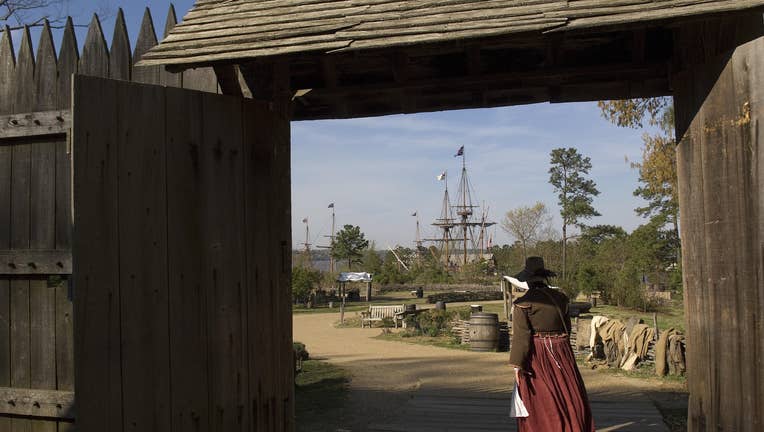 The birth of a nation 400 years ago: An historical interpreter walks out the gate at James Fort in Jamestown, Virginia, 06 April, 2007. When 104 men and boys sailed across the Atlantic 400 years ago to become the first permanent English settlers in t (MANNIE GARCIA/AFP/Getty Images) / Getty Images)

RICHMOND, Va. (AP) - Virginia's black state lawmakers announced Monday that they will boycott a ceremony this week commemorating the beginnings of American democracy because President Donald Trump is scheduled to attend.

The Virginia Legislative Black Caucus said its members would not attend Tuesday's event in historic Jamestown marking the 400th anniversary of the first representative assembly in the Western Hemisphere. The boycott comes after Trump's weekend comments referring to U.S. Rep. Elijah Cummings' majority-black Baltimore-area district as a "disgusting, rat and rodent infested mess."

The caucus's statement did not specifically mention Cummings but said Trump's "repeated attacks on Black legislators and comments about Black communities makes him ill-suited to honor and commemorate such a monumental period in history."

Caucus chair Del. Lamont Bagby said in an interview that the group unanimously reached the boycott decision more than a week ago. But he said the president has "continued his attacks" since then and that his remarks about Cummings' district were more of the same.

Trump will join national and state leaders and dignitaries at Tuesday's event, a commemorative session of the Virginia General Assembly at which Trump is to deliver remarks.

The convening of a legislative assembly in 1619 formed the basis of today's representative system of government in the United States. The Virginia General Assembly is considered the oldest continuously operating legislative body in North America.

"The commemoration of the birth of this nation and its democracy will be tarnished unduly with the participation of the President, who continues to make degrading comments toward minority leaders, promulgate policies that harm marginalized communities, and use racist and xenophobic rhetoric," the caucus said in a statement.

Trump's comments about Cummings were the latest rhetorical shot at a lawmaker of color to spark outrage. Earlier this month, Trump drew bipartisan condemnation following his call for four Democratic congresswomen of color to get out of the U.S. "right now."

Virginia's black state lawmakers announced Monday that they will boycott a ceremony this week commemorating the beginnings of American democracy because President Donald Trump is scheduled to attend.

"President Trump passed criminal justice reform, developed opportunity zones securing record-setting investment in distressed communities, and pushed policies that created the lowest unemployment rates ever for African Americans, so it's a bit confusing and unfortunate that the VLBC would choose to push a political agenda instead of celebrate this milestone for our nation," she said in a statement.

Caucus members said they will also boycott the rest of a weeklong series of events marking the 400th anniversary and have instead planned alternative commemorations Tuesday in Richmond, Virginia's capital.

When the Richmond Times-Dispatch first reported earlier in the month that Trump would take part in the event, top Democratic lawmakers said they would not attend.

Republican Senate Majority Leader Tommy Norment said at the time that their decision was "disappointing and embarrassing."

Tuesday's events are just one part of a yearlong commemoration called American Evolution meant to honor key milestones in the state's colonial history, including the 400th anniversary of the arrival of the first recorded Africans in English North America.