WASHINGTON - President Donald Trump for the first time acknowledged his defeat in the Nov. 3 election and announced there would be an "orderly transition on January 20th" after Congress concluded the electoral vote count early Thursday certifying President-elect Joe Biden’s victory.

Trump's acknowledgement came after a day of chaos and destruction on Capitol Hill when his supporters stormed the Capitol, forced members into hiding and halted the formal congressional tally for more than six hours.

President Donald Trump for the first time acknowledged his defeat in the Nov. 3 election and announced there would be an ‘orderly transition on January 20th' after Congress concluded the electoral vote count early Thursday certifying President-elect Joe Biden’s victory.

"Even though I totally disagree with the outcome of the election, and the facts bear me out, nevertheless there will be an orderly transition on January 20th," Trump said in a statement posted to Twitter by his social media director. Trump's personal Twitter account had been locked by the social media company for posting messages that appeared to justify the assault on the seat of the nation’s democracy.

Trump added, "While this represents the end of the greatest first term in presidential history, it’s only the beginning of our fight to Make America Great Again!"

Trump on Wednesday had encouraged his supporters to march on the Capitol to protest lawmakers’ actions, and later appeared to excuse the violent occupation of the Capitol by the mob, which forced its way inside, clashed with police and ransacked offices. 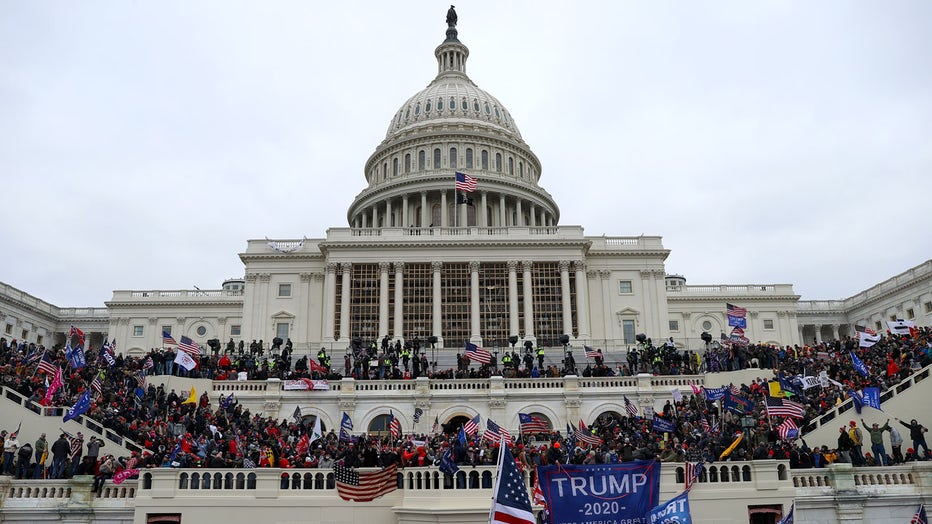 US President Donald Trumps supporters gather outside the Capitol building in Washington D.C., United States on January 06, 2021. Pro-Trump rioters stormed the US Capitol as lawmakers were set to sign off Wednesday on President-elect Joe Biden's elect

Authorities said four people died during the violence. One woman was shot by an officer outside the House chamber, and three others died in "medical emergencies" during the occupation of the building, Washington, D.C., police said.

"These are the things and events that happen when a sacred landslide election victory is so unceremoniously & viciously stripped away from great patriots who have been badly & unfairly treated for so long," Trump wrote in a message that was later deleted by Twitter. He added, "Go home with love & in peace. Remember this day forever!"

In an earlier video he had praised the protesters as "special" people and said he understood their pain. Twitter later locked his account for the first time as it demanded he remove the tweets and threatened "permanent suspension."

Trump’s response to the violence underscored his monthslong obsession with trying to overturn the results of the election. He has spent the final days of his presidency angrily stewing and lashing out at Republicans for perceived disloyalty while refusing to acknowledge his loss or concede.

Trump spent much of Wednesday afternoon watching the insurrection on television from his private dining room off the Oval Office. But aside from sparing appeals for calm issued at the insistence of his staff, he was largely disengaged as the nation’s capital descended into unprecedented scenes of chaos as a mob of thousands tried to halt the peaceful transition of power.

Instead, a White House official said, most of Trump’s attention was consumed by his ire at Vice President Mike Pence, who had announced he would not overturn the will of voters in the congressional electoral count. The official was not authorized to discuss the matter and spoke only on the condition of anonymity.

The violence, coupled with the president’s tepid response, alarmed many in the White House and appeared to push many Republicans to the breaking point after years of allegiance to Trump. After four years with no shortage of fraught moments, Wednesday’s events quickly emerged as the nadir of morale in the Trump White House, as aides looked on in horror at the chaos at the Capitol fomented by Trump.

In a sign of growing frustration, a number of White House aides were discussing a potential mass resignation, according to people familiar with the conversation, although some harbored concerns about what Trump might do in his final two weeks in office if they were not there to serve as guardrails when so few remain.

Stephanie Grisham, the first lady’s chief of staff and a former White House press secretary, submitted her resignation Wednesday, but declined to say what has prompted her move. Deputy national security adviser Matt Pottinger, White House social secretary Rickie Niceta and deputy press secretary Sarah Matthews also resigned, according to officials. More departures were expected in the coming days, officials said. But other aides indicated they were staying to help smooth the transition to Biden’s administration.

Trump’s begrudging statement acknowledging defeat came after even longtime allies floated whether members of his Cabinet should invoke the 25th Amendment and remove him from office. Former New Jersey Gov. Chris Christie told ABC late Wednesday that "responsible members of the Cabinet" should be thinking about fulfilling their oath of office, adding that Trump had "violated his oath and betrayed the American people."

Trump has been single-mindedly focused on his electoral defeat since Election Day, aides said, at the expense of the other responsibilities of his office, including the fight against the raging coronavirus. Indeed, it was Pence, not Trump, who spoke with the acting defense secretary to discuss mobilizing the D.C National Guard on Wednesday afternoon.

Trump only reluctantly issued the tweets and taped a video encouraging an end to the violence. The posts came at the insistence of staff and amid mounting criticism from Republican lawmakers urging him to condemn the violence being perpetrated in his name, according to the official.

And even as authorities struggled to take control of Capitol Hill after protesters overwhelmed police, Trump continued to level baseless allegations of mass voter fraud and praised his loyalists as "very special."

"I know your pain. I know your hurt. But you have to go home now," he said in a video posted more than 90 minutes after lawmakers were evacuated from the House and Senate chambers. "We can’t play into the hands of these people. We have to have peace. So go home. We love you. You’re very special."

In a sign of the extraordinary events that had unfolded over the previous 24 hours, Trump's statement acknowledging that he would leave office on Jan. 20 could not be posted on the president’s Twitter or Facebook feeds because both accounts have been suspended by the companies. Instead, it was released via the Twitter account of Trump’s social media director, Dan Scavino, who frequently tweets on his behalf.

Hours earlier, Trump had appeared at a massive rally near the White House, where he continued to urge supporters to fight the election results and encouraged them to march to the Capitol in remarks that were peppered with incendiary language and rife with violent undertones. At one point, he even suggested he might join them — a prospect that was discussed by the White House but eventually abandoned.

Earlier in the rally, his lawyer, Rudy Giuliani, had advocated what he had called "trial by combat."

Trump’s tweets and video also drew the attention of the social media giants he has frequently maligned. The video was removed by Facebook, "because on balance we believe it contributes to rather than diminishes the risk of ongoing violence," said the site’s head of integrity, Guy Rosen. Twitter took a more punitive approach, locking Trump’s account and warning, "Future violations of the Twitter Rules, including our Civic Integrity or Violent Threats policies, will result in permanent suspension of the @realDonaldTrump account."

Before Trump released the video, Republican lawmakers and former administration officials had begged the president to intervene as the violence spiraled.

"I called him. I think we need to make a statement, make sure that we can calm individuals down," House GOP leader Kevin McCarthy of California told Fox News.

A Senate ally, Republican Marco Rubio of Florida, appealed directly to the president in a tweet: "Mr. President @realDonaldTrump the men & women of law enforcement are under assault. It is crucial you help restore order by sending resources to assist the police and ask those doing this to stand down."

"This is banana republic crap that we’re watching right now," said Gallagher, who had spoken out against objections from fellow Republicans to certifying the Electoral College vote that Biden won.

"Condemn this now, @realDonaldTrump — you are the only one they will listen to," tweeted former White House communications director Alyssa Farah.

Added his former chief of staff, Mick Mulvaney: "The best thing @realDonaldTrump could do right now is to address the nation from the Oval Office and condemn the riots. A peaceful transition of power is essential to the country and needs to take place on 1/20."

Pence, who was ushered out of the Senate chamber to a secure location as protesters breached the building, also called for protesters to disperse.

"The violence and destruction taking place at the US Capitol Must Stop and it Must Stop Now," he tweeted. "Anyone involved must respect Law Enforcement officers and immediately leave the building."