WASHINGTON - Low-flying helicopters were spotted over downtown Washington, D.C., on Monday, as thousands of people are expected to gather outside the White House on Election Day and the nation is concerned over the potential of civil unrest.

The U.S. Department of Energy’s National Nuclear Security Administration (DOE/NNSA) announced two weeks ago that it would conduct low-altitude helicopter flights over downtown D.C. and areas in and around the nation’s capital beginning on Oct. 19 in preparation for the presidential inauguration scheduled to take place on Jan. 20, 2021.

Meanwhile, a non-scalable fence was installed around the White House a day before Election Day. Similar fencing already exists around Lafayette Park and parts of Pennsylvania Avenue in front of the White House for Inauguration Day construction, a law enforcement source told Fox News.

DC prepares for possible unrest ahead of election outcomes

FOX 5’s Bob Barnard takes a look at the preparations the District has made ahead of the elections.

NNSA’s Nuclear Emergency Support Team (NEST) aircraft will measure naturally occurring background radiation as part of standard preparations to protect public health and safety on the day of the inauguration in January. The agency said local residents may see a twin-engine Bell 412 helicopter, which is equipped with sensitive, state-of-the-art passive radiation sensing technology.

DC VOTING 2020: Everything you need to know about voting in the District

Maryland voting guide: County-by-county information on how, when and where to vote

The helicopter will fly in a grid pattern over the areas at 150 feet or higher above the ground at a speed of approximately 80 mph. Flyovers will occur only during daylight hours and are estimated to take approximately two hours to complete per area.

The aircraft measurements will be purely scientific in nature, and no surveillance or other form of monitoring will occur during these flights, according to NNSA. Aerial surveys are a normal part of security and emergency preparedness activities. 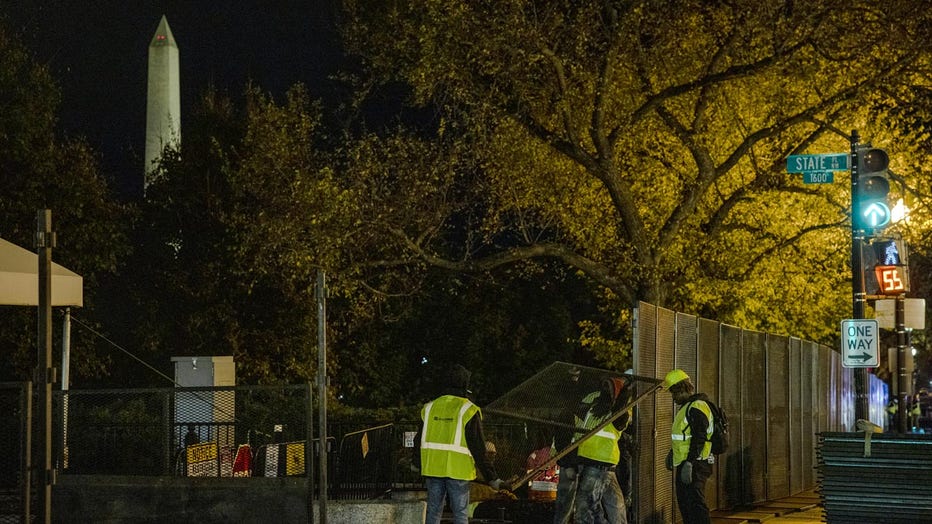 Workers erect barriers in an expanded permitter around the White House the night before the presidential election on November 2, 2020 in Washington, DC. The District is taking precautionary measures for expected demonstrations on Election Day. (Photo

BUSINESSES ACROSS NATION BOARD UP AHEAD OF POTENTIAL ELECTION DAY UNREST

The NEST survey aircraft is an element of the Aerial Measuring System (AMS), based at Joint Base Andrews in Maryland. NEST is part of NNSA’s Counterterrorism and Counterproliferation Program and provides the nation’s nuclear or radiological emergency response capability. NEST provides domestic and international reach through regional programs, offices, and personnel.

Black Lives Matter and Shutdown DC organizers said they expected thousands to turn out around 4 p.m. on Tuesday across the streets from the White House at Black Lives Matter Plaza. Large screens were expected to project election results, and a DJ and dancers would entertain crowds. It was unclear what exactly was planned should the election result in a victory for President Trump, and businesses in D.C. and around the country have boarded up windows in anticipation of civil unrest.

DC Metro Police Chief Peter Newsham said Thursday there were no “credible threats right now of violence,” but said several groups had applied for permits to conduct large demonstrations and the entire police department would be working on Election Day.

Mayor Muriel Bowser said she had not decided whether to use National Guard troops for election-related violence, though some troops remain activated amid the coronavirus pandemic.