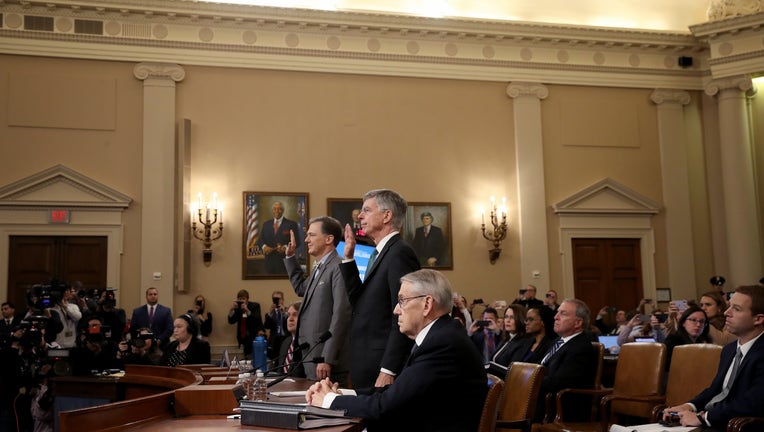 William Taylor, the highest-ranking U.S. official in Ukraine, said for the first time that Trump was overheard asking another ambassador about “the investigations” he’d urged Ukraine’s leader to conduct one day earlier. Taylor said he learned of Trump’s phone call with the ambassador only in recent days.

It was all part of what Taylor called the “irregular channel,” a shadow foreign policy orchestrated by the president’s personal lawyer, Rudy Giuliani, outside traditional oversight that raised alarms in diplomatic and national security circles. 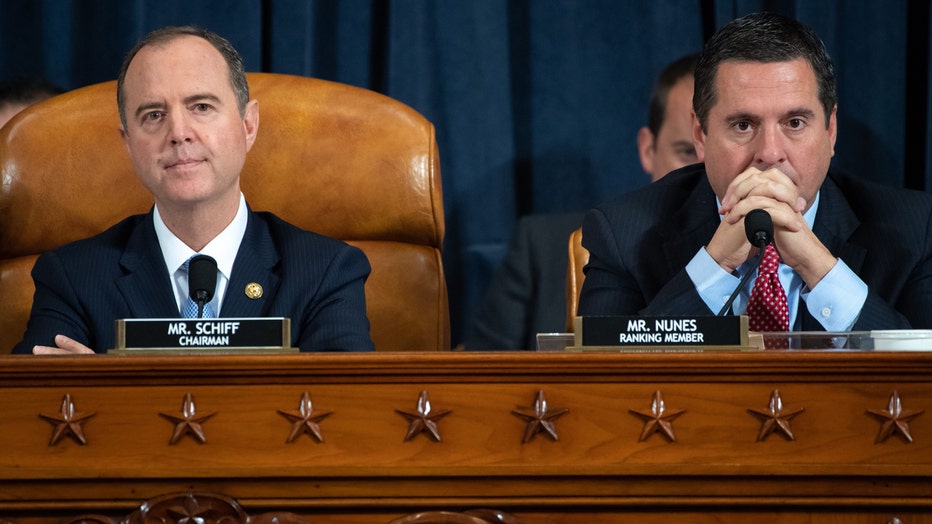 Republicans retorted that the Democrats still have no more than second- and third-hand knowledge of allegations that Trump held up millions of dollars in military aid for the Eastern European nation facing Russian aggression in return for Ukrainian investigations into former Vice President Joe Biden and the Democratic National Committee.

The hearing, the first on television for the nation to see, provided hours of partisan back-and-forth but so far no singular moment etched in the public consciousness as grounds for removing the 45th president from office. Trump, who was meeting at the White House with Turkish President Recep Tayyip Erdogan, declared he was “too busy” to watch. 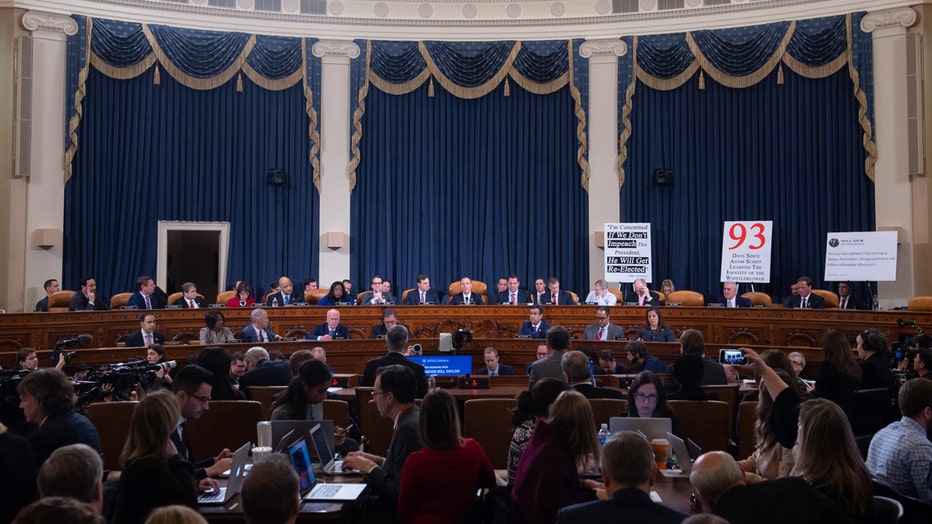 The long day of testimony unfolded partly the way Democrats leading the inquiry wanted: in the somber tones of two career foreign service officers who described confusion both within the U.S. government and in Ukraine about what Trump wanted from Kyiv. Taylor testified alongside George Kent, a deputy assistant secretary at the State Department.

Taylor said his staff recently told him they overheard Trump’s phone call with another diplomat, Ambassador Gordon Sondland, at a restaurant the day after Trump’s July 25 phone call with the new leader of Ukraine that sparked the impeachment investigation. The staffer explained that Sondland had called the president and Trump could be heard asking about “the investigations.” Sondland told the president the Ukrainians were ready to move forward, Taylor testified

Both sides tried to distill it into soundbites.

Democrats said Trump was engaged in “bribery” and “extortion.” Republicans said nothing really happened -- the military aid Trump was withholding from Ukraine while he pushed for the investigations was ultimately released.

The GOP lawmakers demanded anew that they hear in closed session from the whistleblower whose complaint about Trump’s July 25 phone call with Ukraine’s leader led to the inquiry.

Democrats said the person’s identity must be protected but also agreed to consider the request again later.

Across the country, millions of Americans were tuning in — or, in some cases, deliberately tuning out. The country has been here only three times before, but the proceedings were landing on a jaded and weary public, with little certainty they would change minds. 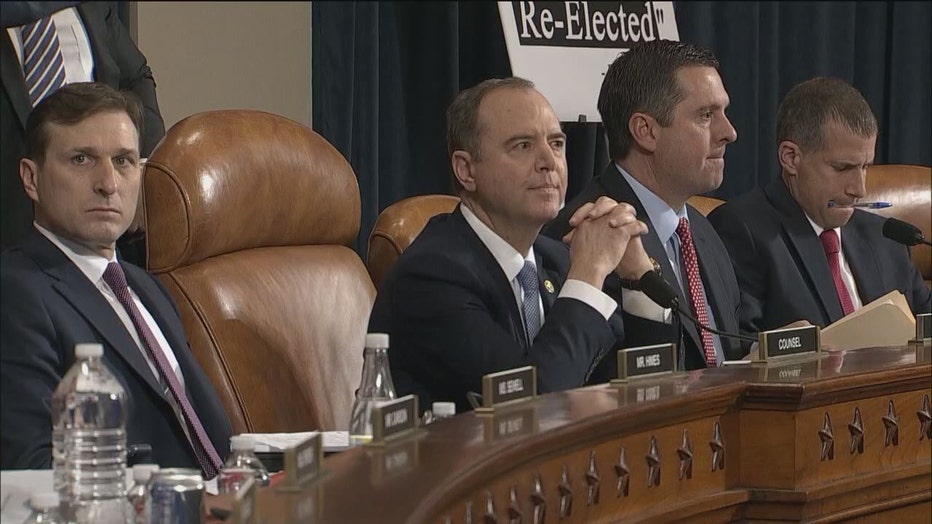 A vote to impeach could come before yearend in the Democratic House. Even if approved, however, conviction in the Republican Senate is considered highly unlikely.

At the start of Wednesday’s session, Rep. Adam Schiff, the Democratic chairman of the Intelligence Committee, outlined the question at the core of the impeachment inquiry -- whether the president abused his office for political gain.

Trump engaged in counter-programming from the White House, with rapid-fire tweets, a video from the Rose Garden and a dismissive retort from the Oval Office as he met with another foreign leader.

“It’s a witch hunt, it’s a hoax,” he said again as he appeared with visiting Turkish President Recep Tayyip Erdogan by his side.

The witnesses defied White House instructions not to appear. Both Taylor and Kent received subpoenas.

Both also had told their stories before. They are among a dozen current and former officials who testified behind closed doors. Wednesday signaled the start of at least two weeks of public hearings as the proceedings spill into the open.

A key Trump ally on the panel, Rep. Jim Jordan of Ohio, mockingly called Taylor the Democrats’ “star witness” and said he’d “seen church prayer chains that are easier to understand than this.”

Taylor, a West Point graduate and former Army infantry officer in Vietnam, responded: “I don't consider myself a star witness for anything."

The top Republican on the panel, Rep. Devin Nunes of California, said Trump had a “perfectly good reason” for wanting to investigate the role of Democrats in 2016 election interference, giving airtime to a theory that runs counter to mainstream U.S. intelligence which found that Russia intervened and favored Trump.

Nunes accused the Democratic majority of conducting a “scorched earth” effort to take down the president after the special counsel’s Russia investigation into the 2016 election failed to spark impeachment proceedings.

“We’re supposed to take these people at face value when they trot out new allegations?” said Nunes, a top Trump ally.

Both Taylor and Kent delivered heartfelt history lessons about Ukraine, a young and hopeful democracy, situated next to Russia but reaching out to the West.

Asked about a text message released earlier in the probe in which Taylor called it “crazy” to withhold the security aid to a foreign ally, he said, “It was illogical. It could not be explained. It was crazy."

Kent, in his opening remarks, directly contradicted a core complaint against Joe Biden being raised by allies of the White House, saying he never heard any U.S. official try to shield a Ukraine company from investigations.

Kent acknowledged that he himself raised concerns in 2015 about the vice president’s son, Hunter Biden, being on the board of Burisma, a Ukraine gas company. He warned that it could give the “perception of a conflict of interest.” But Kent indicated no one from the U.S. was protecting the company from investigations in Ukraine as Republicans have implied.

He did not go into detail about the Trump quid pro quo issues central to the impeachment inquiry, but he voiced his concerns with them.

“I do not believe the United States should ask other countries to engage in selective, politically associated investigations or prosecutions against opponents of those in power, because such selective actions undermine the rule of law regardless of the country,” he said.

The Constitution sets a dramatic but vague bar for impeachment, and there's no consensus yet that Trump's actions at the heart of the inquiry meet the threshold of "high crimes and misdemeanors."

At its core, the inquiry stems from Trump’s July 25 phone call with Ukraine's newly elected president, Volodymyr Zelenskiy when he asked the Zelenskiy for “a favor.”

Trump wanted the Ukraine government to investigate Democrats in the 2016 election and the Bidens, all while withholding the military aid.

The White House released a rough transcript of the conversation, with portions deleted.

Democratic House Speaker Nancy Pelosi was initially reluctant to launch a formal impeachment inquiry. But she pressed ahead in September after the whistleblower’s complaint.