Fence around White House to come down as soon as tomorrow

There’s word tonight that the massive fence around the White House will start coming down as soon as tomorrow.

WASHINGTON (AP) - That massive fence erected around Lafayette Park has become a do-it-yourself gallery of protest art. Messages, posters and portraits, ranging from loving to enraged, almost blot out the view of the White House across the way.

One block away at the corner of 16th and I streets — a constant flash point for most of last week — the calliope version of “La Cucaracha” rang out from an ice cream truck parked just outside the police roadblock. In front of St. John's Episcopal Church, it was so tranquil Monday afternoon you could hear the birds chirping while a white visitor paid for a $20 Black Lives Matter T-shirt with Venmo. 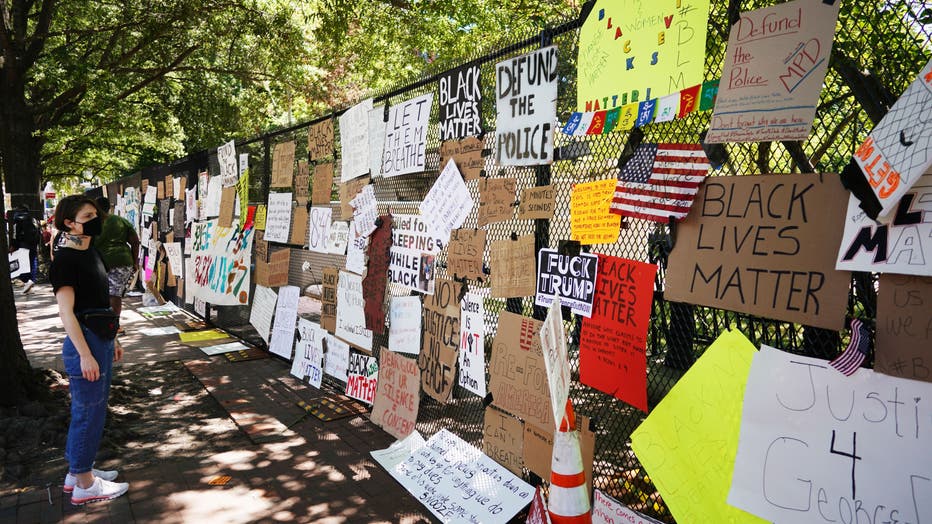 A woman looks at messages attached to the security fence on the north side of Lafayette Square, near the White House, in Washington, DC on June 8, 2020. (Photo by MANDEL NGAN/AFP via Getty Images)

As the nation’s capital emerges from a violent and chaotic 10-day stretch of protests and street battles, a different mood is taking hold. The anger has given way to something closer to a street fair as community leaders, members of Congress and the D.C. government have rallied to the protesters’ cause.

“For me this is exactly the sort of atmosphere it should be,” said Leigh McAlpin, a writer and veteran activist from Baltimore, who was staffing a medical relief tent offering water and snacks. “Last night we were doing the ‘Cha Cha Slide’ in the street."

Police have turned a several-block area north of Lafayette Park, in front of the White House, into an open air pedestrian space. The area is pristine, with no sign of broken glass and only minimal graffiti visible. The clearest sign of last week's protests — other than the massive yellow “Black Lives Matter” painted in the middle of 16th Street — is the sheets of plywood covering almost every window on the block. At the medical relief tents, the number-one priority was no longer dousing people with milk and antacid to counter the effect of smoke bombs and pepper balls. 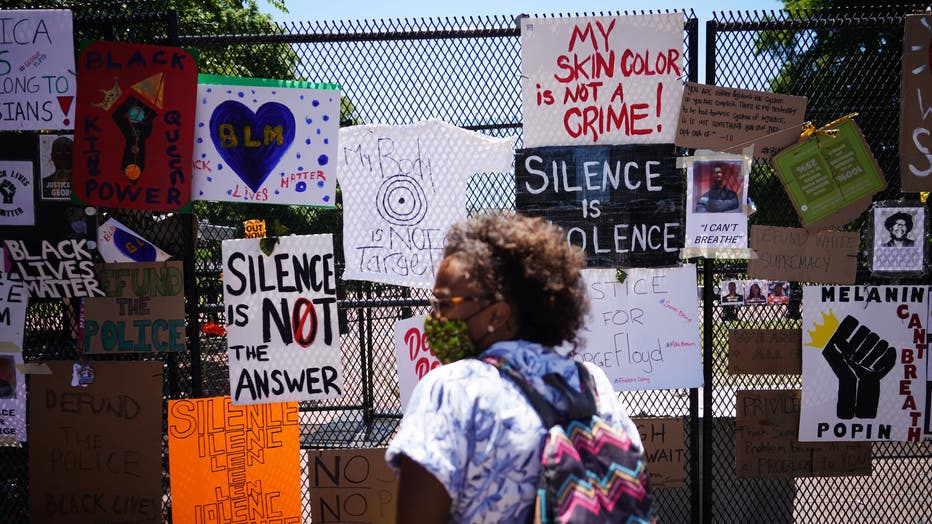 A woman is seen in front of posters and placards on the security fence on the north side of Lafayette Square, near the White House, in Washington, DC on June 8, 2020. (Photo by MANDEL NGAN/AFP via Getty Images)

“Please stay hydrated. We have free water here,” said one volunteer over a loudspeaker. “Donald Trump is not your friend and neither is the sun on a day like this.”

The National Park Service says part of Lafayette Park will reopen Wednesday. Spokeswoman Katie Liming said Monday that most of the temporary fencing will be removed. Some fencing will remain in Lafayette Park around damaged areas to allow workers to make repairs and address safety hazards. Liming gave no time for when the rest of the square would reopen.

Lafayette Park is one of the country’s most prominent sites for political protests and other free-speech events. But it's been closed off since last Monday by a towering black chain link fence that was hastily erected after U.S. Park Police used smoke bombs, pepper pellets and officers on horseback to violently clear peaceful protesters. Immediately afterward, President Donald Trump staged a brief photo op in front of St. John’s, the historic church that had been damaged in the protests.

RELATED: Powerful photos show pain and anger of DC protesters over the death of George Floyd

The exact decision-making around that series of events continues to be a topic of lingering controversy and examination. On Monday, White Press press secretary Kayleigh McEnany said there were “no regrets on the part of this White House" over the handling of peaceful protesters that night.

McEnany said it was Attorney General William Barr who made the decision to expand the security perimeter around the White House. “Park Police also had made that decision independently when they saw all the violence in Lafayette Square,” she said.

McEnany noted that the protests since that night have been increasingly peaceful and she credits Trump's calling in the National Guard. 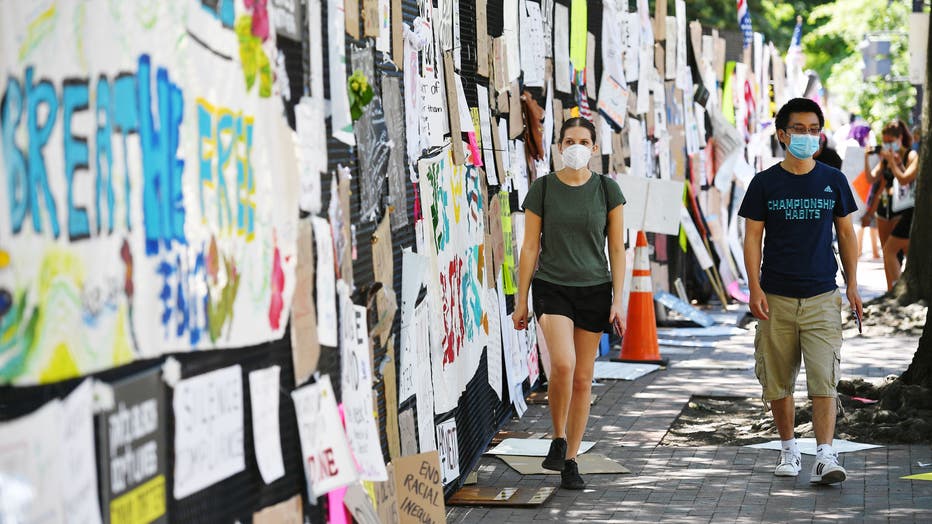 People walk next to placards and posters attached to a security fence on the north side of Lafayette Square, near the White House, in Washington, DC on June 8, 2020. (Photo by MANDEL NGAN/AFP via Getty Images)

As the violence subsided and the weather improved, the mood outside the White House turned festive over the weekend. Republican Sen. Mitt Romney of Utah marched with the protesters. D.C. Mayor Muriel Bowser, who engaged in a weeklong public feud with Trump over his deployment of armed National Guard units in Washington, renamed the intersection in front of St. John's as Black Lives Matter Plaza. Bowser also commissioned the painting of a massive yellow “Black Lives Matter” on 16th street leading up to the White House.

“It's way too early for a victory lap, but this does feel hopeful,” said McAlpin, the relief station volunteer and a veteran of multiple previous protests over black deaths at police hands. “There are a lot of new faces and white supporters. But they're not just chanting ‘No Justice/No Peace’. They're coming up and asking what's next? What groups should they join and support and donate to? And then they're really doing it in their phones in front of you. That's what feels different."

But the undercurrent of defiance remains: local activists both welcomed Bowser's support and dismissed the street painting as a political performance. They added their own, much more politically sensitive, message: “Defund the Police.”

Bowser on Monday, took pains to avoid conflict over the issue, refusing to say whether the Defund the Police addition would be removed.

“That's not part of the mural,” she said at a press conference. “But we recognize it as expression, and especially right now, acknowledging and affirming expression is important to the discussion we have to have as a community.”