Maryland Gov. Wes Moore announced Thursday on his first day in office that he is releasing $69 million in funding for several measures including expanding abortion training, addressing climate change, creating a recreational marijuana industry, and beginning to develop a paid family and medical leave program. He also talked about his plans to improve public safety and lower crime in Maryland. FOX 5's Tom Fitzgerald has a recap of the Governor's first day.

One day after being sworn into office, Moore, a Democrat, approved the money that his predecessor, former Republican Gov. Larry Hogan, withheld because of policy disagreements with the Democrat-controlled General Assembly.

Last year, lawmakers enacted a law over Hogan’s veto, ending a restriction that only physicians can provide abortions in the state. The law enables nurse practitioners, nurse midwives and physician assistants to provide them with training.

It also created a training program that requires $3.5 million in state funding annually. Without the previous governor’s approval, the legislature could only mandate the money for future fiscal years. The new governor’s action makes the money available for the state health department to start the training statewide this fiscal year.

Lawmakers passed the legislation before the U.S. Supreme Court last year overturned Roe v. Wade, the landmark 1973 ruling that banned states from outlawing abortion. Maryland lawmakers were already anticipating the potential ruling, as well as the increased need for access in Maryland as other states moved to restrict or ban abortion.

"We’ve said it before, and we will say it again: Maryland needs to be a state that is a safe haven for abortion rights," Moore said. 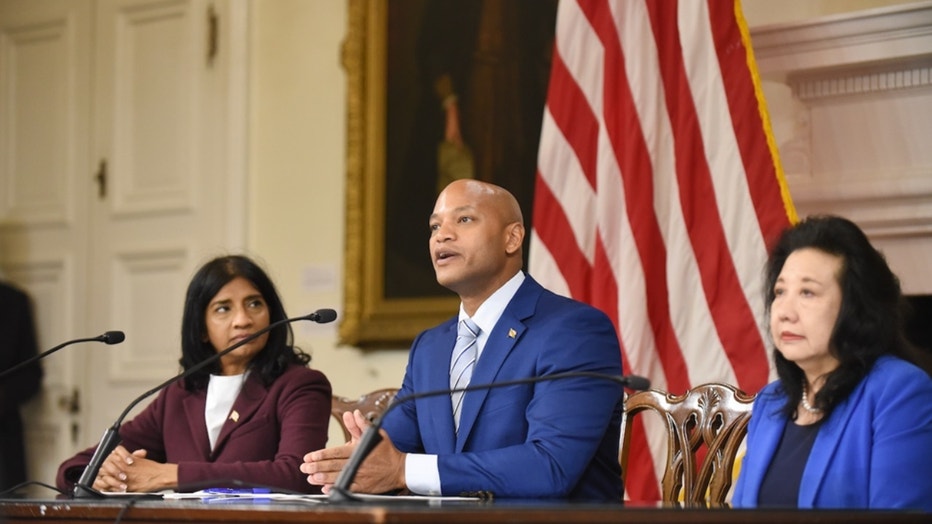 The bulk of the money released Thursday — about $46 million — relates to starting to implement recreational marijuana, which voters approved in a constitutional amendment in November. Lawmakers will be working this session to develop regulations and taxation of cannabis, which will become legal for people over 21 on July 1.

The funds include about $40 million for the Cannabis Business Assistance Fund in the Maryland Department of Commerce to support the development of the industry, including grants or loans for training and support. Another $5 million will go to a public health fund to support a health advisory council and pay for research on the effects of legalization and substance abuse treatment.

Another $1.5 million will be used to enhance criminal justice information systems to comply with expungement provisions. The law provides for automatic expungements of all cases prior to legalization on July 1 in which possession of cannabis was the sole charge in the case.

"It means as we legalize recreational cannabis, we also must work diligently to correct the devastating impacts of the war on drugs," Moore said. "As we have said, we cannot talk about the benefits of legalization if we are also not willing to wrestle with the consequences of criminalization."

Moore and leading lawmakers have said they are focusing on creating an equitable industry, one that ensures licenses go to small growers, retailers and manufacturers — not just corporate giants.

Wes Moore was sworn in as Maryland’s first Black governor Wednesday during an inauguration ceremony at the State House in Annapolis. FOX 5's Tom Fitzgerald tells us about the historic swearing-in.

About $3.8 million will be allocated to start a green bank, which will use funds to leverage private and philanthropic investments in projects intended to reduce greenhouse gas emissions. Another $3.8 million will go to installing the installation of renewable energy generating equipment in multifamily housing for moderate- and low-income residents.

Moore announced $1.1 million for the Chesapeake Conservation Corps, a paid service-year program that matches young people with government or nonprofit organizations to work on environmental projects.

The governor also released about $10 million to the state’s labor department to pay for the early startup costs to implement a statewide paid family and medical leave program, which lawmakers approved last year.

In addition, Moore said he will be creating a new department, the Maryland Department of Service and Civic Innovation, with a new Cabinet-level secretary to create a new, voluntary service-year option for high school graduates. The governor said the initiative will enable high school graduates to get paid while they learn new skills to prepare them for future jobs.

During his first day promises, Gov. Moore also promised to tackle an issue that is "urgent" to Marylanders - violent crime.

Among his plans for lowering crime, Gov. Moore said he wants to increase penalties for violent repeat offenders and fix the state's parole and probation system by filling thousands of vacancies. He added that he hopes to reform the state's juvenile justice system and work with the state's Attorney General and the U.S. Attorney to get illegal guns off the streets.

The Governor also indicated that he aims to increase support for Maryland's mental health care system, which would allow police officers to focus on policing instead of having to respond to situations where a person is experiencing a mental health crisis.

The announcement comes as Gov. Moore is set to release his state budget on Friday.