Fifty-eight years after Dr. Martin Luther King Jr. led a march on Washington, voting rights advocates across the country did the same on Saturday.

The March On for Voting Rights took place in cities across the United States Saturday in hopes of keeping Dr. King’s dream "deferred no longer." Advocates in King’s era achieved the Voting Rights Act of 1965 — which drastically improved voter access for Black Americans.

RELATED: March on Washington: Everything you need to know ahead of 58th anniversary

But in 2013’s Shelby County v. Holder, the Supreme Court stripped away provisions of the law that subjected jurisdictions with a history of egregious voting discrimination to federal oversight. Since that time, many states have enacted new laws that were once prohibited by the 1965 law. 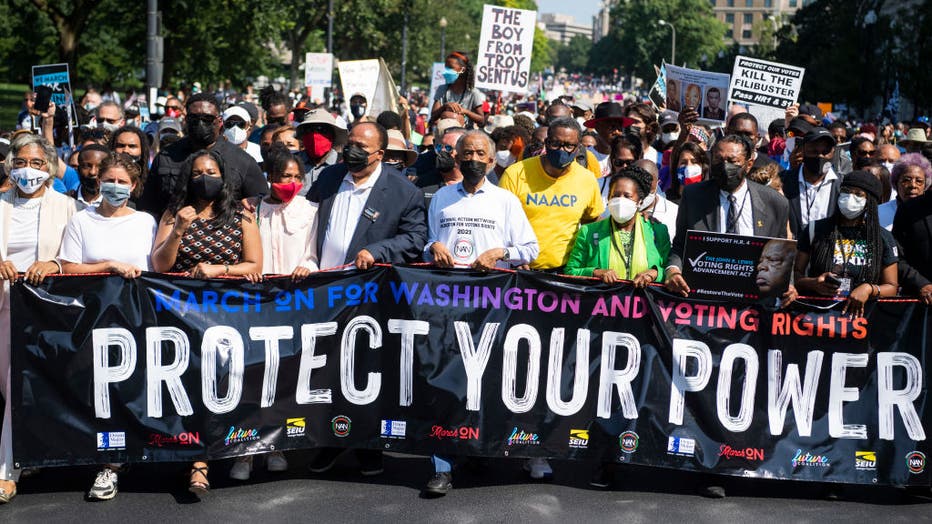 From right, Reps. Al Green, D-Texas, Sheila Jackson Lee, D-Texas, Derrick Johnson, president of the NAACP, Rev. Al Sharpton, and Martin Luther King III, participate in the March On for Washington and Voting Rights to call on the Senate to pass voting

Organizers of Saturday’s march said 49 states have introduced more than 400 bills just this year that "amount to outright voter suppression." As of July 2021, 30 states had enacted nearly 20 new laws that targeted voter access.

March organizers grievances include laws that:

Organizers called these new laws a "return to the Jim Crow Era." President Joe Biden said as much in March when he referred to Georgia’s new voting laws as "Jim Crow in the 21st Century."

"It must end," Biden said in a statement. "We have a moral and Constitutional obligation to act. I once again urge Congress to pass the For the People Act and the John Lewis Voting Rights Advancement Act to make it easier for all eligible Americans access the ballot box and prevent attacks on the sacred right to vote."

Proponents of the new voting laws say they reduce the likelihood of election fraud and promote voter access.

The For the People Act has been the top voting rights priority for the Democrats since the 117th Congress began its term in January — earning the Designation H.R. 1.

The act would expand voting rights, change campaign finance laws to limit the influence of money in politics, enact new ethics rules for federal officials and prohibit partisan gerrymandering, which is currently only banned when conducted along racial lines.

Among other changes, the act would expand federal oversight into redistricting, voter ID requirements, alterations to multilingual voting materials, changes to precinct location and changes to how voter rolls are purged.

March organizers consider the passage of both acts as goals of Saturday’s event. They both have passed in the House this year.

Even so, H.R. 1 stalled in the Senate when it failed to gain enough support to end the filibuster. And despite overwhelming Democratic support for its passage, Sen. Joe Manchin, D-W.V., said he would not support it.

RELATED: For the People Act: Voting rights bill fails to advance in Senate

Manchin told the Charleston Gazette-Mail the bill was too partisan. He has, however, offered support for H.R.4.

But even with his support, Democrats won't have the 60 votes required to break the filibuster should the chamber vote along party lines.

Prominent Republicans, who have criticized the Democratic proposals as a power grab, say they aren’t opposed to election laws that expand voter access. And many of them support proposals to build trust among Americans who believe, albeit falsely, that the last presidential election was stolen from former President Donald Trump and other GOP candidates due to widespread voter fraud.