FALLS CHURCH, Va. - Amber Heard’s sister testified Wednesday that she found herself in the middle of fights — literally and figuratively — between her sister and Johnny Depp during their troubled relationship.

Whitney Heard Henriquez is the first witness to testify at the five-week civil trial to say she personally witnessed Depp hitting Heard. Depp has testified he never struck Heard.

Henriquez testified the fight occurred in March 2015 — a month after Depp and Heard’s wedding — when Heard found evidence that Depp had already had an extramarital affair.

Henriquez recounted that an inebriated Depp blamed Heard for forcing him into the extramarital encounter.

At one point, she said, she was caught between Depp and Heard as he charged up a staircase to confront Heard. Henriquez said she was struck in the back, and Heard became enraged and "landed one" on Depp, with Henriquez stuck between the two.

Heard was cross-examined for most of the day following her testimony in the libel suit against her.

Depp's legal team questioned her about several incidents in which she says she was attacked by her former husband including a fight during which Heard claimed Depp sexually assaulted her. 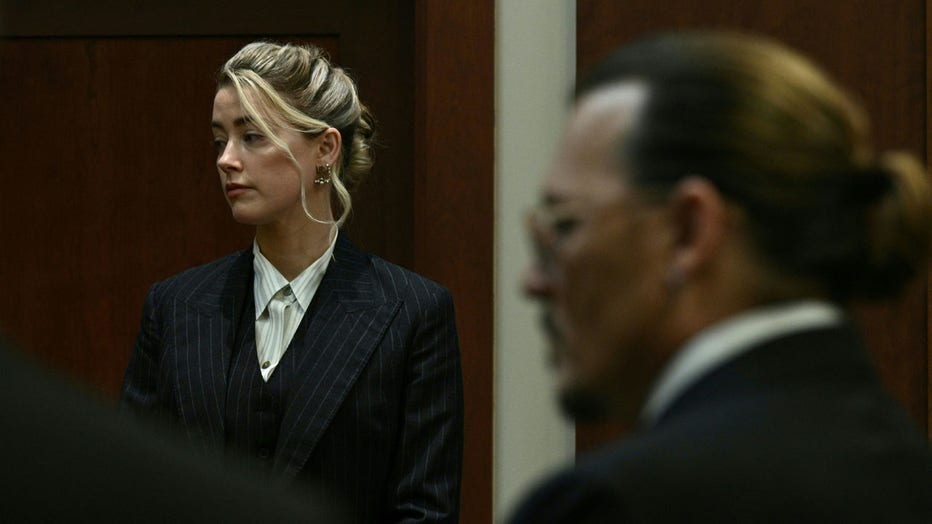 Actors Amber Heard and Johnny Depp watch as the jury comes into the courtroom after a lunch break at the Fairfax County Circuit Courthouse in Fairfax, Virginia, on May 17, 2022. - Actor Johnny Depp is suing ex-wife Amber Heard for libel after she wro

Heard was questioned as to why she never sought medical attention following the alleged attacks and as to why she wrote a series of love notes to Depp in the months after she said she was assaulted.

The jury was also shown a recording of a deposition Heard gave in 2016 in which she appeared to inadvertently admit she had tipped off the media regarding the former couple's divorce proceedings.

Heard's grueling cross-examination concluded with questions about her arrest for allegedly hitting an ex-girlfriend in 2009.

Wednesday's proceedings are expected to include a pre-recorded deposition from a former best friend who says she and Heard once got into a physical fight.

Amber Heard back on the stand for cross-examination

Lawyers also questioned Heard about her $7 million divorce settlement from Depp and her pledge to donate that full amount to charity. Heard has only donated a portion of it saying Depp's lawsuit prevented her from fulfilling her pledge.

During her earlier direct testimony, Heard said she did not want to publicly expose Depp as an abuser but had to in order to obtain a restraining order against him. She discussed at length her makeup routine and her expertise in covering up bruises with what she called her "bruise kit." Heard's legal team also showed photographs to the jury that showed her with red marks and swelling on her face which came after they say the Hollywood couple had their final fight before their divorce in May 2016.

Amber Heard questioned about claims that she assaulted her ex-wife

Also Monday, Heard strongly denied Depp's accusation that she left human fecal matter in the couple's bed following a fight. Heard said it belonged to their teacup Yorkshire terrier that messed the bed.

Heard concluded her testimony by saying daily accusations from Depp supporters that she's lying about the alleged abuse are "torture." Heard is expected back on the witness stand Tuesday.

Prior to the one-week trial hiatus, Heard went into graphic detail as she described disturbing sexual assault allegations against her ex-husband.

From the witness stand, she described an alleged sexual assault she said took place over several days while the then-couple was in Australia in 2015.

Heard alleged Depp accused her of cheating on him with movie co-stars including Billy Bob Thornton and Eddie Redmayne, with whom she'd just shot the film "The Danish Girl." Heard has denied those accusations.

Heard said Depp tore off her clothes and repeatedly punched her before he sexually assaulted her with a liquor bottle in an alcohol-fueled rage.

'I did not punch you:' Johnny Depp's lawyers play audio of altercation between Depp and Amber Heard

Johnny Depp's lawyers play audio of an altercation between Depp and Amber Heard where Depp accuses Heard of punching him.

Heard also described bizarre details she alleges followed the attack, including Depp using her torn nightgown to wrap a raw steak that had been left out.

She accused Depp of writing on the walls with blood from his finger that she says he severed during the incident. Depp has accused Heard of causing the injury after she threw a bottle of alcohol at him.

The March 2015 incident in Australia, that happened over three days during the couple's first year of marriage while Depp was filming the fifth "Pirates of the Caribbean" movie, has been disputed and has been a focal point of the trial.

Heard spoke about how the couple met during their work on the film "The Rum Diary" and how they began dating while doing a press tour for the film's release in 2011.

Johnny Depp's lawyers question alleged injuries Amber Heard documented after a May 2016 altercation with Depp, saying multiple others have testified that they did not observe injuries to Heard in person that are documented by Heard in photographs.

Earlier in the trial a psychologist testified that Heard suffered post-traumatic stress disorder from violence, including sexual violence, she suffered at the hands of Depp. The psychologist, Dawn Hughes, told jurors that there is corroboration of many of the instances of abuse -- including apologies and admissions made by Depp to Heard. Hughes is the first witness to take the stand on Heard's behalf in the four-week trial after Depp rested his case earlier in the day.

Johnny Depp's lawyers read entries written by Amber Heard from the time of their relationship in her and Depp's shared journal.

Depp's agent testified that Heard's op-ed piece in The Washington Post describing herself as a victim of domestic abuse was "catastrophic" to his career. Agent Jack Whigham said Depp lost a $23 million deal for a "Pirates of the Caribbean" sequel following Heard's piece.

Johnny Depp's lawyers question Amber Heard about an alleged assault with a bottle that Heard said happened in Australia and Depp's finger injury that allegedly occurred the same night.