NFL legend John Madden died Tuesday at the age of 85, the league announced in a statement.

PLEASANTON, Calif. - John Earl Madden, a former Oakland Raiders coaching great who went on to become the most famous sportscaster in history, died on Tuesday, the NFL confirmed. He was 85 years old.

The league said Madden died unexpectedly in the morning and there was no cause released.

NFL Commissioner Roger Goodell in a statement, "Nobody loved football more than ‘Coach.’ He was football. He was an incredible sounding board to me and so many others. There will never be another John Madden, and we will forever be indebted to him for all he did to make football and the NFL what it is today."

The Raiders also released a statement after news of Madden's passing.

"Few individuals meant as much to the growth and popularity of professional football as Coach Madden, whose impact on the game both on and off the field was immeasurable," the team said.

Former 49ers coach reflects on the legacy of John Madden

The larger-than-life Madden split time living in Northern California; in Pleasanton and Carmel with his family. He was a man who made non-sports fans love – if not the game – Madden himself, with his jovial and unpretentious style.

For years, Madden was also known for his regular chats with the Bay Area's KCBS radio, talking about football, life and his famous "turducken" on Thanksgiving ( and how he fried a chicken stuffed inside a duck, stuffed inside a turkey).  That's where commuters also learned stories about his life off the field, too, such as his fear of flying, which is why he took the "Madden Cruiser" – a converted Greyhound bus – to all his games and events.

Madden’s successful career was the focus of a 90-minute documentary, appropriately named "All Madden," which aired on Fox on Christmas Day – three days before his death.  The documentary features an extensive interview with Madden and includes his sons Joe and Mike, as well as his wife, Virginia – the couple celebrated their 62nd anniversary two days before he died.

The day before the documentary aired, Goodell succinctly said: "John Madden is to the NFL what Elvis Presley is to rock-and-roll. He’s the king."

Fox Sports’ Tom Rinaldi, the project’s executive producer and co-director, appeared on KTVU ahead of the documentary, touting Madden and all that he stood for and accomplished.

"He still permeates the game, which is an amazing tribute to his reach and all the different ways beyond football that he seeped into American popular culture," Rinaldi said.

Madden gained fame in a decade-long stint as the coach of the renegade Oakland Raiders, making it to seven AFC title games and winning the Super Bowl following the 1976 season.

He was also the youngest coach to reach 100 regular-season victories when he did it at 42.

He never had a losing season and still has the most wins among all Raiders coaches. His .739 winning percentage is second to Vince Lombardi among those who have coached in at least 140 regular-season and playoff games.

"Football is my life. It’s something I say proudly. But, it’s complicated," Madden explained in the documentary. 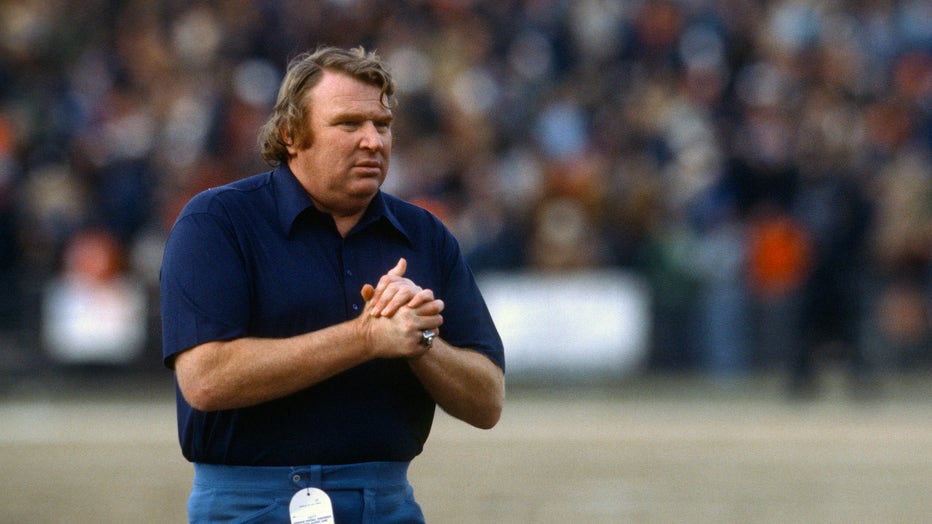 UNSPECIFIED - CIRCA 1977: John Madden head coach of the Oakland Raiders looks on from the sidelines during an NFL football game circa 1977. Madden coached the Raiders from 1969-78. (Photo by Focus on Sport/Getty Images)

He retired from coaching over an ulcer issue and general burnout from the job.

He then joined the other side of the sport – in the commentating booth. First for CBS, then FOX and later ABC and NBC. During his commentating career – from 1979 to 2008, he was one of the biggest broadcasters in sports. For 22 seasons, Madden co-hosted with Pat Summerall, who died in 20l3.

Madden finished his career as a 16-time Emmy Award winner. He was inducted into the Pro Football Hall of Fame in 2006.

Madden was so popular, he also later became the frontman for the uber-successful "Madden NFL" video game. Many young people today only know Madden from his video game, though their parents know him from his coaching or broadcasting career.

Madden was raised in Daly City, California. He played on both the offensive and defensive lines for Cal Poly in 1957-58 and earned his bachelor’s and master’s degrees from the school.

Madden was chosen to the all-conference team and was drafted by the Philadelphia Eagles, but a knee injury ended his hopes of a pro playing career. Instead, Madden got into coaching, first at Hancock Junior College and then as defensive coordinator at San Diego State.

Al Davis brought him to the Raiders as a linebackers coach in 1967, and Oakland went to the Super Bowl in his first year in the pros. He replaced John Rauch as head coach after the 1968 season at age 32, beginning a remarkable 10-year run.

Al Michaels, Madden’s broadcast partner for seven years on ABC and NBC, said working with him "was like hitting the lottery."

"He was so much more than just football — a keen observer of everything around him and a man who could carry on a smart conversation about hundreds and hundreds of topics. The term ‘Renaissance Man’ is tossed around a little too loosely these days, but John was as close as you can come," Michaels said.

And Michaels wasn't the only person to sing Madden's praises.

The tributes flooded in, on social media and in person.

California Gov. Gavin Newsom weighed in, saying that Madden"redefined the role of a sports broadcaster — his voice as recognizable as anyone who ever did the job. He hoisted a Super Bowl trophy with California’s own Oakland Raiders. Our thoughts are with his family as we mourn this incredible man."

The Alameda County Sheriff's Office also said the department was very sad to hear about Madden, a "long-time resident of Alameda County and a friend to many of us. He will be missed."

And it really didn't matter if you cared about sports or not, said Cris Collinsworth, Madden’s successor as an analyst on "Sunday Night Football.

"If you love football, John Madden was probably part of the reason why," Collinsworth said. "If you were lucky enough to watch his Raiders, you were likely inspired watching his free-spirited team play with such heart. If you watched him as a broadcaster, you learned the game from the inside out, through the eyes of a former offensive lineman who understood every nuance of the game. But, as a broadcaster he will always be remembered as the original LOL. He could make you belly laugh for reasons you couldn’t explain, but always treasured. And if you remember him for his video game, you probably learned how to play football without ever touching a ball." 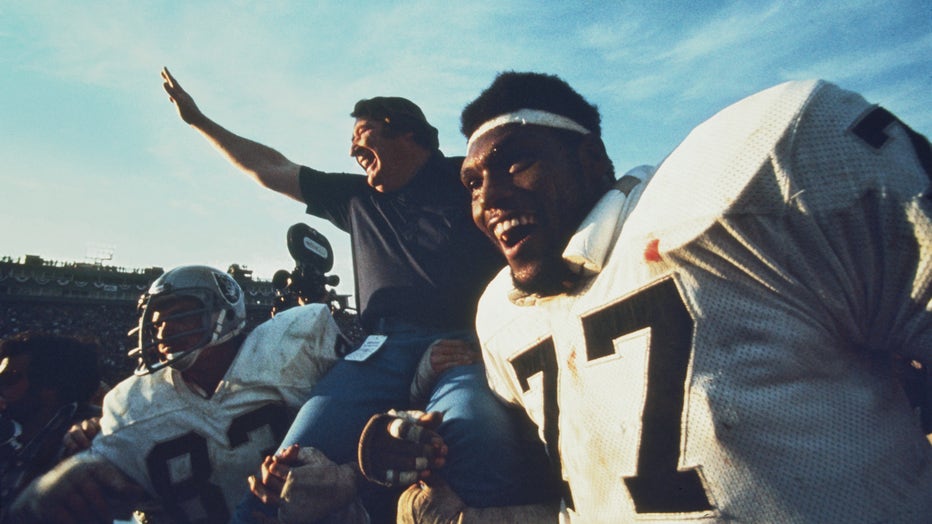 Raiders' head coach John Madden celebrates in the Oakland 32-14 win over the Vikings at the Super Bowl XI game of the Oakland Raiders vs the Minnesota Vikings played at the Rose Bowl in Pasadena, California on January 9, 1977. (Photo by Dennis Despro 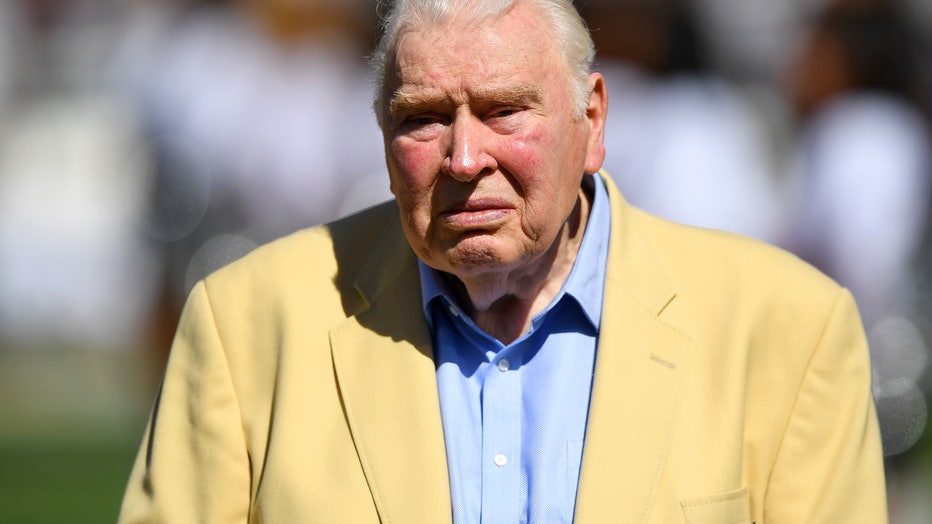 OAKLAND, CA - SEPTEMBER 18: Former Oakland Raiders head coach John Madden wearing his Hall of Fame Jacket looks on during the un vailing of the Hall of Fame busts for former Raider and teammate Ken Stabler at halftime of an NFL game between the Atlan 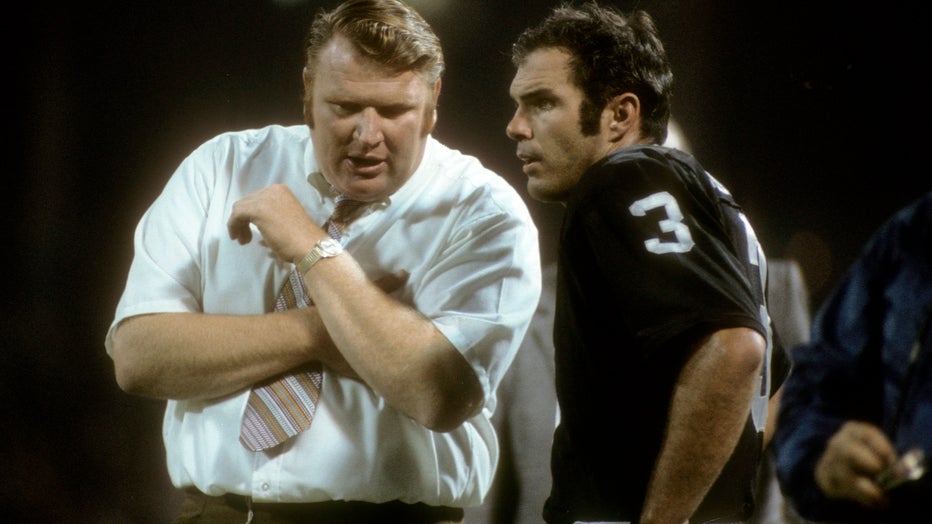 OAKLAND, CA - CIRCA 1970: Quarterback Daryle Lamonica #3 of the Oakland Raiders talks with head coach John Madden on the sidelines during an NFL football game circa 1970 at the Oakland Coliseum in Oakland, California. Lamonica played for the Raiders

The Associated Press and Fox Sports contributed to this report.