A lone police officer diverted a group of protesters away from the Senate floor as pro-Trump demonstrators breached the Capitol building on Jan. 6 (Credit: Igor Bobic/ HuffPost via Storyful)

CLEVELAND - A former school therapist in Ohio was arrested Thursday on federal charges for her alleged involvement in the storming of the U.S. Capitol by supporters of President Donald Trump.

Priola is a former occupational therapist for the Cleveland schools, FOX 8 reported. She submitted her resignation one day after the deadly siege in Washington, D.C.

During the riot on Jan. 6, a woman believed to be Priola by federal authorities was photographed by a Getty photographer at the front of the U.S. Senate chamber, according to the criminal complaint filed in U.S. District Court. The woman is seen carrying a sign that reads, "The Children Cry Out For Justice," while showing a cell phone to another individual sitting in the seat of the vice president. 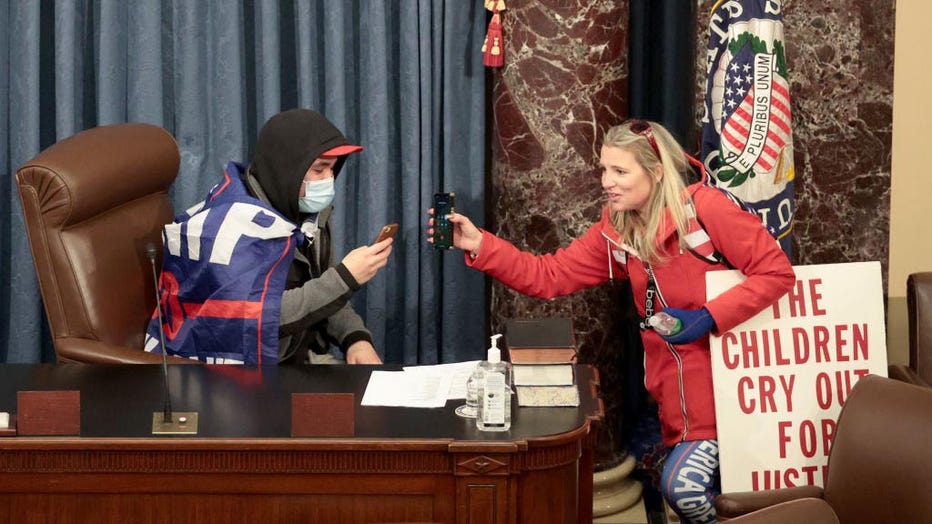 Rioters are seen in the Senate Chamber on Jan. 6, 2021 in Washington, D.C. A woman believed to be Christine Priola by authorities is seen carrying a sign that reads, “The Children Cry Out For Justice.” (Photo by Win McNamee/Getty Images)

Law enforcement officers searched her house on Jan. 8. Priola’s iPhone placed her location near the U.S. Capitol building at about the time of the attack, the criminal complaint says.

Priola was expected for an initial appearance in U.S. District Court in Cleveland before U.S. Magistrate Judge William Baughman. Her case will then be transferred to the District of Columbia, according to Cleveland.com.

In her resignation letter to the school district obtained by FOX 8, Priola said she would be "switching paths to expose the global evil of human trafficking and pedophilia, including in our government and children’s services agencies."

She also wrote in the letter that she would not be taking the coronavirus vaccine in order to return to in-person learning and that she did not agree with union dues, alleging the money funds "people and groups that support the killing of unborn children."

The charges come more than a week after the mob seeking to overturn the results of the U.S. presidential election breached the building in Washington D.C., disrupting a joint session of Congress finalizing President-elect Joe Biden’s victory. Five people, including a Capitol police officer, died in the attack.

Several others pictured on social media during the riot have been arrested, including a Delaware man seen holding a Confederate flag inside the Capitol building and another Florida man dubbed the "lectern guy" after a Getty photograph showed him smiling and waving while hauling the House speaker’s lectern.

Trump was impeached Wednesday by the House over the deadly Capitol siege, the only president in U.S. history twice impeached. The attack has also left the nation’s capital, and other capital cites, under high security amid threats of more violence around the inauguration.

Many of the rioters attended a rally at the White House prior to the attack, in which the president called for them to "fight like hell" against the election results.