Jurors on Monday convicted former Rocky Mount police officer Thomas Robertson of all six counts he faced stemming from the Jan. 6, 2021, riot, including charges that he interfered with police officers at the Capitol and that he entered a restricted area with a dangerous weapon, a large wooden stick.

Robertson’s jury trial was the second among hundreds of Capitol riot cases. The first ended last month with jurors convicting a Texas man, Guy Reffitt, of all five counts in his indictment.

Robertson didn’t testify at his trial, which started last Tuesday. Jurors deliberated for several hours over two days before reaching their unanimous verdict.

One juror, who spoke to The Associated Press only on condition of anonymity, said as she left the courthouse, "I think the government made a really compelling case and the evidence was fairly overwhelming." 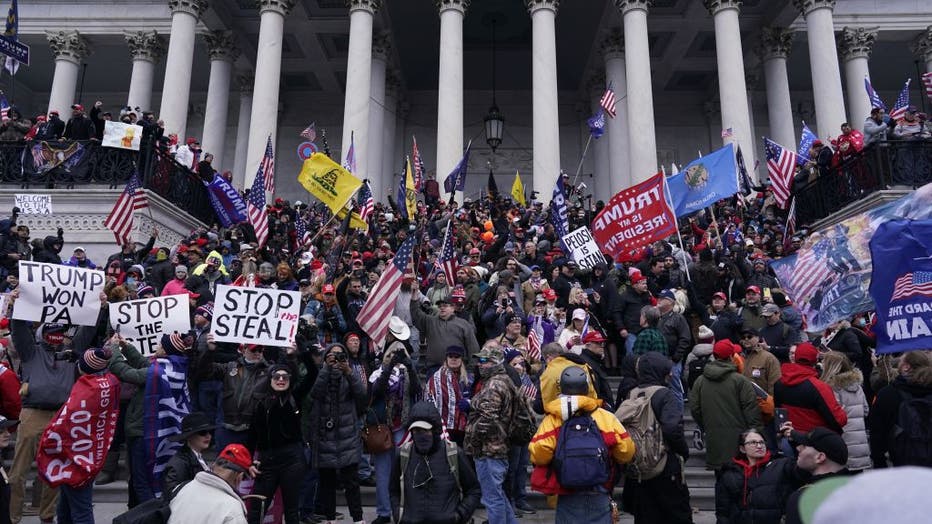 WASHINGTON, DC - JANUARY 06: Protesters gather on the second day of pro-Trump events fueled by President Donald Trump's continued claims of election fraud in an to overturn the results before Congress finalizes them in a joint session of the 117th Co

A key witness for prosecutors in his case was Jacob Fracker, who also served on the Rocky Mount police force and viewed Robertson as a mentor and father figure. Fracker was scheduled to be tried alongside Robertson before he pleaded guilty last month to a conspiracy charge and agreed to cooperate with authorities. Fracker testified Thursday that he had hoped the mob that attacked the Capitol could overturn the results of the 2020 presidential election.

During the trial’s closing arguments Friday, Assistant U.S. Attorney Risa Berkower said Robertson went to Washington and joined a "violent vigilante mob" because he believed the election was stolen from then-President Donald Trump. He used the wooden stick to interfere with outnumbered police before he joined the crowd pouring into the Capitol, she said.

"The defendant did all this because he wanted to overturn the election," Berkower said.

Rollins conceded that Robertson broke the law when he entered the Capitol during the riot. He encouraged jurors to convict Robertson of misdemeanor offenses but urged them to acquit Robertson of felony charges that he used the stick as a dangerous weapon and that he intended to stop Congress from certifying the Electoral College vote.

"There were no plans to go down there and say, ‘I’m going to stop Congress from doing this vote,’" Rollins said.

Fracker testified that he initially believed that he was merely trespassing when he entered the Capitol building. However, he ultimately pleaded guilty to conspiring with Robertson to obstruct Congress.

Under cross-examination by Rollins, Fracker said he didn’t have a "verbal agreement" with anybody to obstruct the joint session of Congress. Fracker said he believed everybody in the mob "pretty much had the same goal" and didn’t need for it to be "said out loud."

Robertson and Fracker drove with a neighbor to Washington on the morning of Jan. 6. Robertson brought three gas masks for them to use, according to prosecutors.

After listening to speeches near the Washington Monument, Fracker, Robertson and the neighbor walked toward the Capitol, donned the gas masks and joined the growing mob, prosecutors said. Robertson stopped to help his neighbor, who was having trouble breathing. Fracker broke off and entered the building before Robertson, but they reunited inside the Capitol.