Protesters on Monday tried toppling a statue of Andrew Jackson near the White House, while sealing off an area in an act of defiance similar to events in Seattle by declaring off-limits an area dubbed the "Black House Autonomous Zone," or "BHAZ."

RELATED: Trump calls for arrests, prison time for vandals targeting monuments: 'There will be no exceptions!' 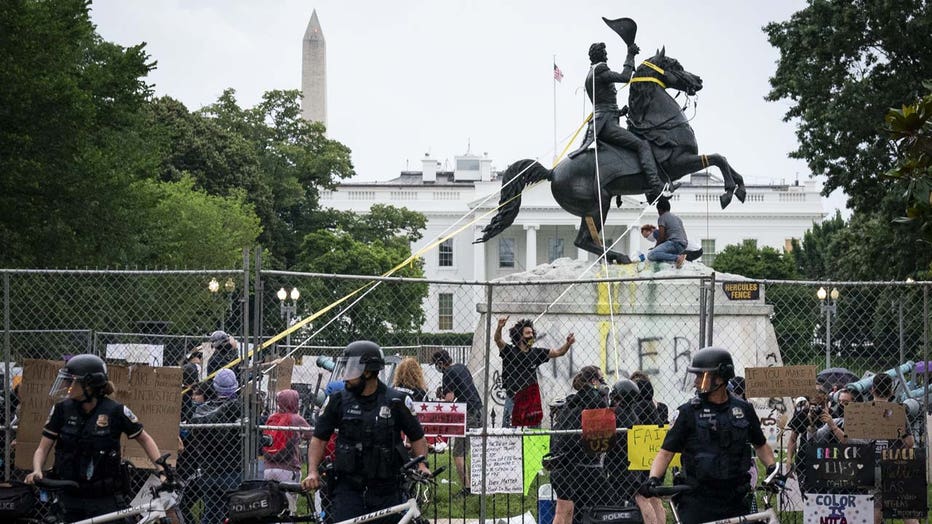 Protesters attempt to pull down the statue of Andrew Jackson in Lafayette Square near the White House on June 22, 2020 in Washington, DC. Protests continue around the country over police brutality, racial injustice and the deaths of African Americans

Police intervened as chants of “Hey, Hey, Ho, Ho, Andrew Jackson’s got to go" were heard while a rope was put around the bust of the seventh president riding a horse, the Washington Post reported. Hundreds of protesters locked arms around the statue before police officers removed the crowd in a chaotic scene.

U.S. Park and D.C. police used a chemical irritant to disperse the crowd and officers were hit with objects. Jackson, who has faced ire in the present day for his severe treatment of Native Americans, was the latest historical figure targeted by protesters demanding monuments and memorials to those with racist pasts be taken down.

President Trump says he has authorized arrest of anyone vandalizing monuments, statues or federal property

President Trump said he has authorized the federal government to arrest anyone who vandalizes or destroys monuments, statues or other federal property.

Fox News has confirmed that the U.S. Secret Service asked reporters to leave the White House grounds nearby. The specific reason wasn't clear.

Nearby, videos circulating online showed people around Lafayette Park carrying wooden boards and fencing in an attempt to declare the autonomous zone. Orange and white barricades -- originally erected by police -- were moved from a church and added to others to make them longer.

Protesters were seen overturning trash bins and dragging a chain-link fence across a road to erect more barricades. A Fox News crew was escorted from the area and told by protesters to stay away.

Protesters on Monday tried&nbsp;toppling&nbsp;a statue of Andrew Jackson near the&nbsp;White House, while sealing off an area in an act of defiance similar to events in Seattle by declaring off-limits an area dubbed the&nbsp;'Black House Autonomous Zone,' or 'BHAZ.'

The historic St. John's Episcopal Church, often called the Church of the Presidents, was vandalized with "BHAZ" spray-painted on its pillars. The church became the center of controversy earlier this month when President Trump posed for a photograph in front of the building after police cleared out protesters.

The Washington, D.C., Metropolitan Police Department did not return emails or calls for comment.

The efforts by protesters were similar to those in Seattle who carved out the "Capitol Hill Organized Protest," or "CHOP," in the city's Capitol Hill neighborhood more than two weeks ago. City officials announced Monday that steps were being taken to dismantle the cop-free area after a series of shootings and other violence within the area.

This is a developing story; check back for updates. Fox News' Kevin Corke and Ashley Cozzolino in Washington contributed to this report.