WASHINGTON - President Trump declared Monday morning that anyone caught vandalizing monuments or any other federal property can be subject to arrest and face up to 10 years in prison. 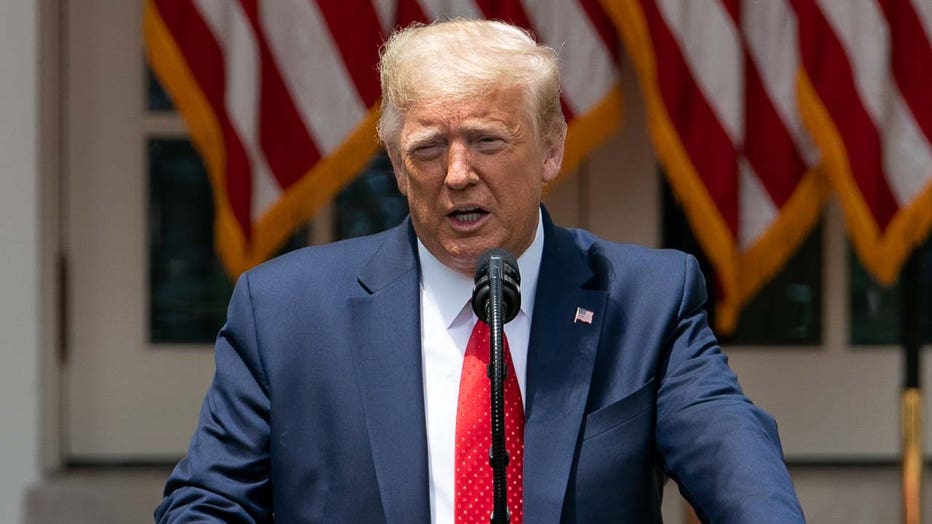 The president’s latest statement follows an attempt to take down a statue of Andrew Jackson in Washington, D.C.’s Lafayette Square near the White House Monday night, a second incident targeting the nearby St. John’s Church, and prior vandalism of the Lincoln Memorial and World War II Memorial.

“I have authorized the Federal Government to arrest anyone who vandalizes or destroys any monument, statue or other such Federal property in the U.S. with up to 10 years in prison, per the Veteran’s Memorial Preservation Act, or such other laws that may be pertinent,” Trump tweeted. “This action is taken effective immediately, but may also be used retroactively for destruction or vandalism already caused. There will be no exceptions!”

House Minority Leader Rep. Kevin McCarthy, R-Calif., called the church attack "a chilling message that faith and freedom are enemies in the eyes of the anarchists on the street," adding that those responsible "must be prosecuted."

Historic monuments and statues have become the targets of anger and vandalism during protests in the wake of George Floyd's police custody death at the end of May.

President Trump says he has authorized arrest of anyone vandalizing monuments, statues or federal property

President Trump said he has authorized the federal government to arrest anyone who vandalizes or destroys monuments, statues or other federal property.

The initial statues under fire were those of Confederate soldiers and generals largely in the South, but the anger has spread to monuments well beyond that historical period.

On Thursday, demonstrators in Portland, Ore., toppled a statue of President George Washington. Friday, protesters in San Francisco defaced and toppled the statue of former President Ulysses S. Grant, who led the Union Army during the Civil War.

WEIGH IN: Should people caught vandalizing monuments be arrested and face up to 10 years in prison?

Jackson, who has faced ire in the present day for his severe treatment of Native Americans, was the latest historical figure targeted by protesters demanding monuments and memorials to those with racist pasts be taken down. Reuters reported that while protesters failed to take down the Jackson statue, it was defaced Monday night with “killer scum” written on the pedestal.

The Veterans' Memorial Preservation Act that Trump cited calls for up to 10 years behind bars and a fine for anyone who damages or attempts to damage "any structure, plaque, statue, or other monument on public property commemorating the service of any person or persons in the armed forces of the United States."

Trump said Monday night that he will sign an executive order meant to protect public statues and monuments in general from being damaged or destroyed.

"We are going to do an executive order and make the cities guard their monuments," Trump told Eternal Word Television Network's Raymond Arroyo. "This is a disgrace."