President Joe Biden called on the Senate to pass his sweeping social and environmental package, which contains provisions that would lower the cost of prescriptions drugs, in remarks on Dec. 6, 2021.

WASHINGTON - President Joe Biden on Monday pushed his "Build Back Better" agenda, focusing on how provisions in the sweeping social and environmental spending bill would lower the price of prescription drugs for millions of Americans and called on the Senate to pass the legislation.

Biden’s $2 trillion social and environmental package, officially called the Build Back Better Act, still faces potential hurdles in the Senate. But the president touted the bill's provisions that would "lower the prices of drugs and hold drug companies accountable."

Prior to his remarks, Biden met with two women who suffer from diabetes. If passed, the bill would cap the cost of insulin at $35 per month for Medicare beneficiaries and those with private insurance.

"Imagine if you're a parent of one of the roughly 200,000 young people in this country that suffer from Type 1 diabetes. Imagine if you can't afford their insulin," the president said in remarks from the White House. "It's not only a risk to your child's life, it deprives of you your dignity."

A provision in the bill would also require drug companies to pay rebates to Medicare if they increase prices above the rate of inflation. Drugs sold to private plans would count in calculating the penalty, like a tax on price increases. The issue is dividing business groups in a fierce lobbying battle.

Corporate groups focused on affordable employee benefits want to keep the language as is, so it would provide price-increase protection for companies and their workers and not just Medicare enrollees. Other groups such as the influential U.S. Chamber of Commerce are backing the pharmaceutical industry’s drive to block restraints on pricing, including inflation caps, saying they would stifle innovation. 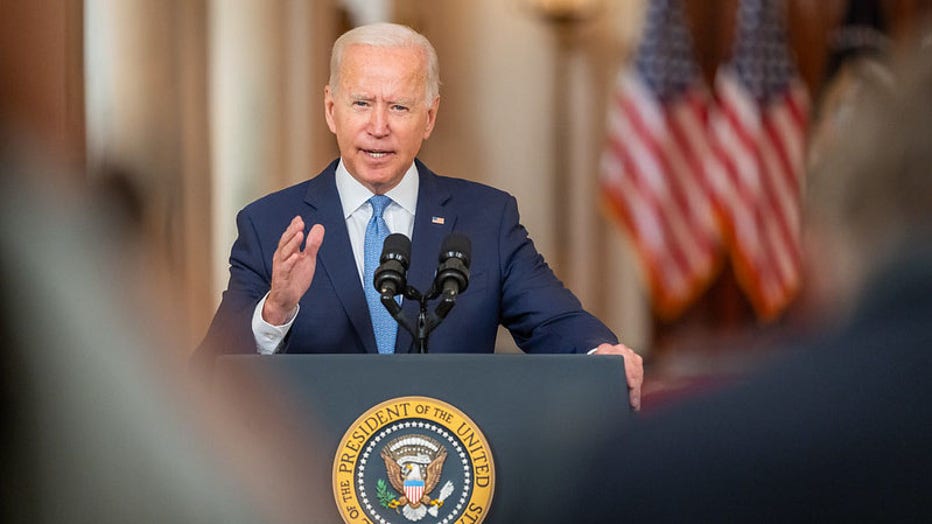 But in his remarks, Biden reiterated his point of prices being "outrageously expensive" in America — noting how nearly one in four struggle to afford such medication.

"We pay the highest prescription drug prices of any developed nation in the world," Biden said. "We pay about two to three times what other countries pay for the same drug."

A 2019 analysis by the U.S. House Ways and Means Committee found that Americans pay, on average, nearly four times more for prescription drugs than other countries.

Biden pushed for Medicare provisions to slash out-of-pocket costs for seniors and allow the program to negotiate prices for a limited number of medicines. Specifically, the administration is calling for Medicare to be able to negotiate prices for drugs seniors get at the pharmacy counter through its part D program and drugs that are administered in a doctor’s office through its part B program.

Drugs would become eligible for negotiation once they have been on the market for a fixed number of years, the White House said in a fact sheet shared last month. Medicare would negotiate up to 10 drugs per year during 2023, with those prices taking effect in 2025 — increasing to up to 20 drugs per year.

Democrats announced an agreement had been reached on the plan to lower prescription drug costs, including reducing the price of insulin, in early November.

The House passed the roughly $2 trillion social agenda legislation on Nov. 19 on a party-line vote and sent it to the Senate. The bill resets national priorities on issues from climate to family life and faces more scrutiny in that evenly divided chamber, where cost-cutting demands by moderate Sen. Joe Manchin, D-W.Va., and strict rules seem certain to force significant changes.

Most of it would be paid for by tax increases on the wealthy, big corporations and companies doing business abroad.