President Joe Biden spoke at the Tomb of the Unknown Soldier Thursday in commemoration of Veterans Day and the monument's 100th anniversary.

WASHINGTON - President Joe Biden visited Arlington National Cemetery in Virginia on Thursday to participate in a wreath-laying ceremony on his first Veterans Day in office.

Biden, the father of an Iraq war veteran, spoke at length praising American veterans, thanking them for their commitment to the nation’s defense.

"To all our veterans, past and present: We thank you, we honor you, and we remember, always, what you’ve done for us," Biden said.

Biden said those who’ve earned the title of "American veteran" have an honor that only a small percentage of Americans can claim, "one that marks those able to claim it as brothers and sisters." He said the "badge of courage" unites across all ages, regardless of background, because to be a veteran is to have endured and survived challenges most Americans will never know.

Earlier in the day, the White House announced an effort to better understand, treat and identify medical conditions suffered by troops deployed to toxic environments.

In a fact sheet, the White House detailed the effort that centers on lung problems suffered by troops who breathe in toxins and the potential connection between rare respiratory cancers and time spent overseas breathing poor air.

Federal officials plan to start by examining lung and breathing problems but said they will expand the effort as science identifies potential new connections.

The new federal effort is also designed to make it easier for veterans to make claims based on their symptoms, to collect more data from troops who are suffering and to give veterans more time to make medical claims after symptoms such as asthma and sinus problems develop.

"We’re discovering there is a whole host of lung conditions related to deployment," said Dr. Richard Meehan, an immunologist and rheumatologist. The retired U.S. Naval Reserve officer, who served in the Mideast during the 1990s and again in 2008, is co-director of the Denver-based National Jewish Hospital Center for Excellence on Deployment-Related Lung Disease.

RELATED: 'Band of brothers': Guards keep eternal watch over Tomb of the Unknowns for those who made ultimate sacrifice

Biden has hypothesized about a potential link between his son Beau's death from an aggressive brain cancer after returning from Iraq and his exposure to toxins in the air, particularly around massive pits where the military disposes of waste by burning. There's no scientific evidence to suggest that link.

Beau Biden's death was a defining moment for Joe Biden, one he said affected his decision to sit out the 2016 presidential race. The younger Biden deployed from October 2008 until September 2009 as a captain in the Delaware Army National Guard. In 2013, he was diagnosed with a tumor, and he died two years later at age 46.

The new rules will allow veterans to make claims within 10 years of service, and the government has changed how it determines what symptoms count and why.

Taken together, these actions will improve our understanding of the health effects of military-related exposures, educate providers and veterans about these exposures, and provide timelier access to health services and benefits for individuals who were exposed," the White House said in a statement. "The Administration will continue to prioritize efforts to support veterans who were exposed to environmental hazards during their military service."

Biden reaffirmed the nation’s commitment to its veterans, calling it a "sacred obligation."

"We have many obligations, but one truly sacred obligation: to properly prepare those and equip those who we send into harm’s way and care for them and their families while they’re both deployed and when they return home," Biden stressed near the Tomb of the Unknown Soldier. "This is a lifetime sacred commitment. It never expires."

RELATED: Tomb of the Unknown Soldier Centennial Commemoration: What you need to know

Since Nov. 11, 1921, the Tomb of the Unknown Soldier has been the final resting place for one of the country’s unidentified service members during World War I. The monument has since been dedicated to many other unidentified soldiers from later wars. 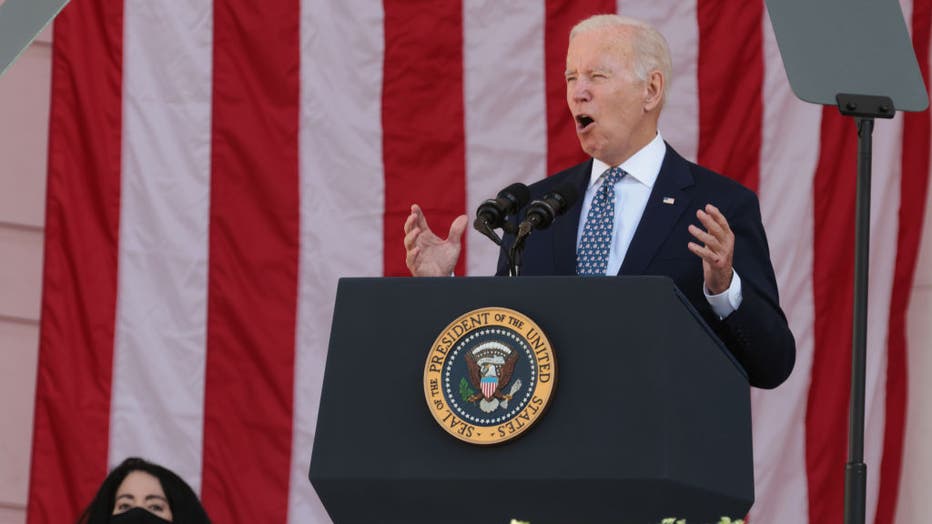 Twenty-four hours a day, soldiers from the 3rd U.S. Infantry Regiment, known as "The Old Guard," stand watch over the Tomb. The Tomb Guards, also called "Sentinels," are chosen for this prestigious and highly selective post only after rigorous training and a demanding series of examinations. The Old Guard has held this distinguished duty since 1948.

And for the first time in nearly a century, tourists have been allowed to visit the sacred grounds to walk and place flowers at the tomb this week. On Thursday, the public is invited to observe a joint full honors procession and a flyover with all branches of the military at the cemetery.

Businesses and organizations are coming together to thank and honor veterans and active-duty service members for Veterans Day, which is Nov. 11. Click here for a running list of free goods, services and discounts being offered.

Most businesses will require proof of military service to access these discounts.

In addition, the FOX Corporation and its employees are working with U.S.VETS to support their "Make Camo Your Cause" campaign by spreading awareness to the campaign and wearing camo to support the cause on Veterans Day.

In order to bring visibility and awareness to the campaign, FOX is asking businesses to purchase apparel from U.S.VETS online shop and wear camo with U.S.VETS this Veterans Day and post on social media using #HONORUSVETS. U.S.VETS is also looking for volunteers in the fight against veteran homelessness.

"If you are compassionate, hardworking, or just looking for a way to give back to the community, volunteering at a U.S.VETS location would be a rewarding experience for you," U.S.VETS wrote.

RELATED: ‘Make Camo Your Cause’: U.S.VETS leaders say goal is to ‘put ourselves out of business’

In addition, employers can "hire a vet" through the U.S.VETS Career Network, which connects professional and student veterans with lasting careers they love.

Donations to the organization can also be made on its website.

Launched in 1993, U.S.VETS is the largest nonprofit organization with boots on the ground to combat America’s veteran homeless crisis head-on.

The organization has 32 sites across 11 regional locations in California, Nevada, Arizona, Hawaii, Texas, and Washington D.C. and offers temporary and permanent housing solutions and comprehensive services to veterans and their families nationwide.

This story was reported from Cincinnati. This station is owned by the FOX Corporation.