WASHINGTON - Joined by the prime ministers of the United Kingdom and Australia, President Joe Biden addressed the nation Wednesday to announced a new trilateral defense partnership.

The collaboration, which is called AUKUS, will see Australia gain advanced technologies, such as artificial intelligence, cyber defenses, quantum technologies and nuclear-powered submarines.

"Our nations and our brave fighting forces have stood shoulder to shoulder for literally more than 100 years," Biden said. "Through the trench fighting in World War I, the island hopping in World War II, during the frigid winters in Korea and the scorching heat of the Persian Gulf, the United States, Australia and United Kingdom have long been faithful and capable partners, and we’re even closer today."

Australia’s nuclear-powered submarines would be a joint endeavor between the three nations, with a focus on interoperability, commonality, and mutual benefit, AUKUS leaders said in a joint statement. They hope to deliver this capability to the ROyal Australian Navy within an 18-month window.

"Australia is committed to adhering to the highest standards for safeguards, transparency, verification, and accountancy measures to ensure the non-proliferation, safety, and security of nuclear material and technology," the statement reads.

China is expected to regard the alliance as a provocative move. The Chinese have repeatedly lashed out at Biden as he’s sought to refocus U.S. foreign policy on the Pacific in the early going of his presidency.

During June’s meeting of the Group of 7, Biden urged America’s allies to work to compete against China. G-7 nations called on China to respect human rights in Hong Kong and Xinjiang province and to permit a full probe into the origins of COVID-19.

Beijing took exception with Biden administration officials repeatedly calling out China over those two points, as well as the crackdown on democracy activists in Hong Kong and cybersecurity breaches originating from China.

Even so, leaders of the alliance acknowledged the submarine will not have nuclear weapons. It will only be powered by nuclear energy. 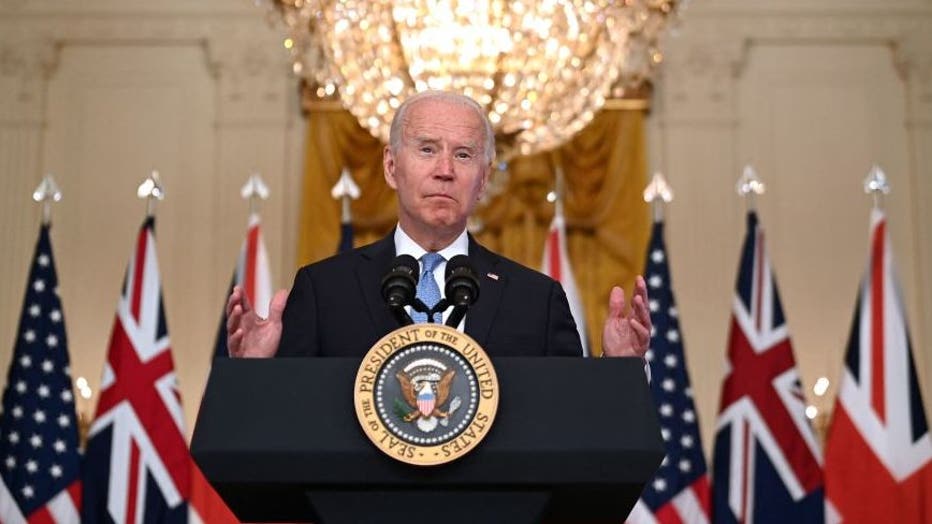 "Australia remains committed to fulfilling all of its obligations as a non-nuclear weapons state, including with the International Atomic Energy Agency," AUKUS leaders said. "Our three nations are deeply committed to upholding our leadership on global non-proliferation."

Before the announcement went public, a senior administration official downplayed the idea that the alliance was meant to serve as a deterrent against China in the region.

The official, who spoke to the Associated Press on the condition of anonymity to preview the announcement, said the alliance’s creation was not aimed at any one country, and is about a larger effort to sustain engagement and deterrence in the Indo-Pacific by the three nations.

Publicly, administration officials have expressed desires to work with China on many issues, including curbing the pandemic and climate change. Biden said AUKUS recognizes the need to ensure peace and stability in the Indo-Pacific over the long term.

"We need to be able to address both the current strategic environment in the region and how it may evolve," Biden said. "Because the future of each of our nations, and indeed the world, depends on a free and open Indo-Pacific enduring and flourishing in the decades ahead."