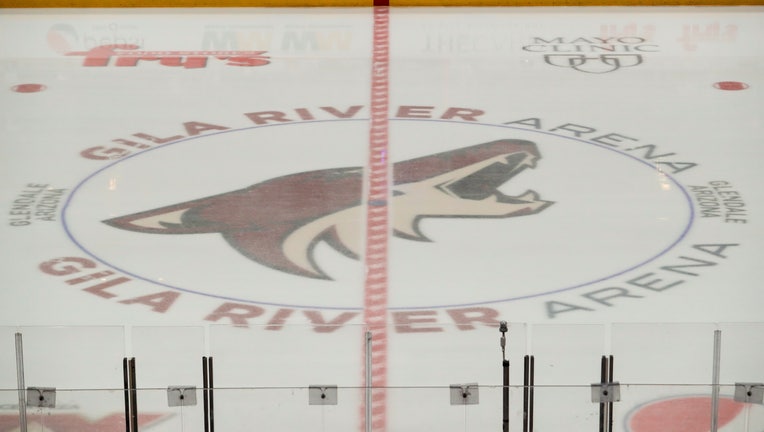 GLENDALE, AZ - MARCH 26: The Coyotes logo on the ice during the NHL hockey game between the Chicago Blackhawks and the Arizona Coyotes on March 26, 2019 at Gila River Arena in Glendale, Arizona. (Photo by Kevin Abele/Icon Sportswire via Getty Images)

GLENDALE, Ariz. - The Arizona Coyotes nearly got locked out of the Gila River Arena due to delinquent taxes and unpaid arena charges, but the team says it has paid their debt in full after an "unfortunate human error."

As first reported by The Athletic, FOX 10 confirmed through the city of Glendale documents that the team owed more than $1.3 million in unpaid state and city taxes. The unpaid taxes reportedly go as far back as June 2020.

The Coyotes had until Dec. 20 at 5 p.m. to pay the outstanding bill, or the team was going be locked out of the arena, city documents read.

In the notice of tax lien from Glendale addressed to Xavier Gutierrez, President and CEO of Icearizona Hockey Company LP, which owns the Coyotes, city manager Kevin Phelps says he's concerned if the team's current and future financial obligations can be met.

"We just felt we needed to protect the interest of our taxpayers, and thought this was the best way to do that," said Glendale City Manager Kevin Phelps.

The money that was owed to the city never threatened to freeze city programs or slash city workers. According to Phelps, it was more a matter of playing fair.

"I think it was a frustration that we have, because many businesses face pandemic and challenges and staffing. Meanwhile, we have one organization with a liability that was larger than anyone in our office can remember," said Phelps.

Coyotes: ‘We deeply regret the inconvenience this has caused’

In response, the team said on Dec. 9 that all payments were made and the team is current on all bills and tax liabilities.

"We have already launched an investigation to determine how this could have happened and initial indications are that it appears to be the result of an unfortunate human error. Regardless, we deeply regret the inconvenience this has caused. We will make sure that by tomorrow morning, the Arizona Coyotes are current on all of our bills and owe no state or local taxes whatsoever. And we will take immediate steps to ensure that nothing like this can ever possibly happen again," the team said on Wednesday.

Coyotes-Glendale relationship on thin ice for some time

The back taxes are just the tip of the iceberg, following years of squabbles and threats, with several new owners and the NHL.

Earlier this year, the team was put on notice that it would need to find a new arena after the city of Glendale announced it will not renew the team's lease.

It was reported that the city decided not to renew their operating agreement with the Coyotes, citing "an increased focus on larger, more impactful events" for the arena after the upcoming season ends. Both parties were under a year-to-year agreement for the past few years.

In the long run, Glendale city officials believe they are better off giving pro hockey the cold shoulder.

"It will take many events, like concerts, bull riding and MMA fighting that are popular these days to make up for hockey, so what they did is they did us a favor," said Phelps.

Currently, the Coyotes are considering a move to Tempe.