FOX 5's Sue Palka is here with the latest on Wednesday's storm that left snow, rain and a wintry mix throughout the DC region.

WASHINGTON (FOX 5 DC) - There are only five days until the official start of winter, but Mother Nature decided to celebrate a little early this year with a winter storm that impacted a large portion of the D.C. region Wednesday.

While snowfall numbers had to have some adjustment over the past few days, the general theme for the storm remained consistent with the highest snowfall totals in our northern and western zones, while eastern zones ended up with mostly rain.

On Wednesday night, rain mostly washed away the snow we had earlier today in parts of the area, but it also created a slushy mess all around the area.

Rain has mostly washed away the snow we had earlier today, but it also created a slushy mess all around the DMV.

FOX 5's Ayesha Khan spoke with Howard County Executive Calvin Ball about what kind of preps they have in place, especially because of the rapidly changing weather conditions that we are expecting going into the overnight hours.

“We are concerned about potential freezing overnight or refreezing, but we have about 140 of our highway workers working all throughout the day, and we began putting salt into our trucks and have 200 pieces equipment and are ready so we will be well prepared," said Ball.

The season’s first snowstorm is here! The Shenandoah Valley in western Virginia is one of the area’s hardest-hit regions.

At around 11 a.m., the storm started pushing into our region.

Temperatures across the region on Tuesday night into Wednesday fell mostly back into the 20s and lower 30s. Ground temperatures were down as well, meaning in locations where it starts to snow steadily there should have been minimal ground melt on untreated surfaces.

In our western zones, snow piled up pretty quickly in the afternoon. Meanwhile, inside the D.C. Beltway, snow initially came down at a pretty steady pace, which led to some slick conditions around the lunchtime hours.

Loudoun County calls off remote learning due to snow

Loudoun County gave students their first true snow day of the school year. FOX 5's Ike Ejiochi is in Leesburg where families are enjoying today outside.

By the middle of the afternoon, the rain/snow line started its steady march to the northwest. The I-95 Corridor saw rain mixing in as temperatures slowly started to rise into the middle to upper 30s.

Southeastern zones saw some very heavy rainfall with some spotty sleet mixing in, while northern zones started to pick up on some of the heavier snows. 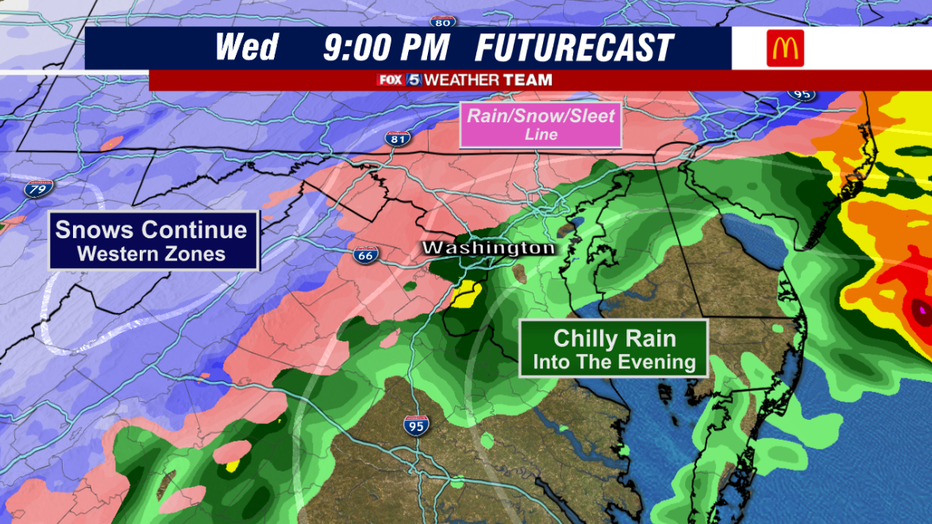 By the late afternoon through the evening hours, as the storm began to pass just to our east, temperatures were well enough above freezing that we saw all rain along the I-95 Corridor.

The wintry mix may push far enough northwest during that time that locations, like Frederick and Hagerstown, which at one time looked like they were going to stay all snow, may change over to sleet for a period of time late today.

Making the most of the snow day

As the winter weather stops and the cleanup begins, for many, the snow day wasn’t a lost day in downtown Frederick.

Eastern zones are expected to stay as rain, and perhaps even get a late-night break in the action.

By the late evening hours and overnight hours tonight, cold air should return to the region, and a quick burst of sleet or snow will be possible as the storm pulls away.

The storm should be well gone by sunrise on Thursday. 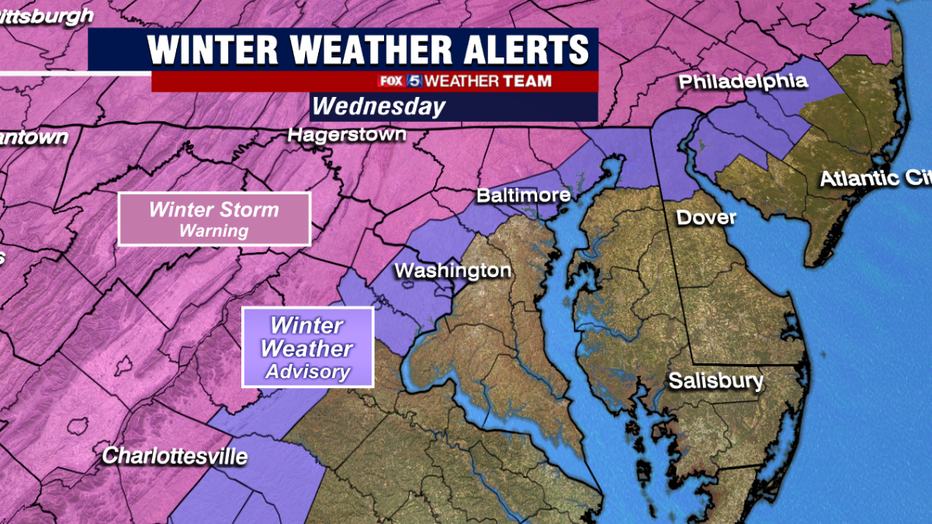 Winter Weather Advisories, meaning winter weather is still expected, just less impactful, are in place along the I-95 corridor through the evening hours tonight. 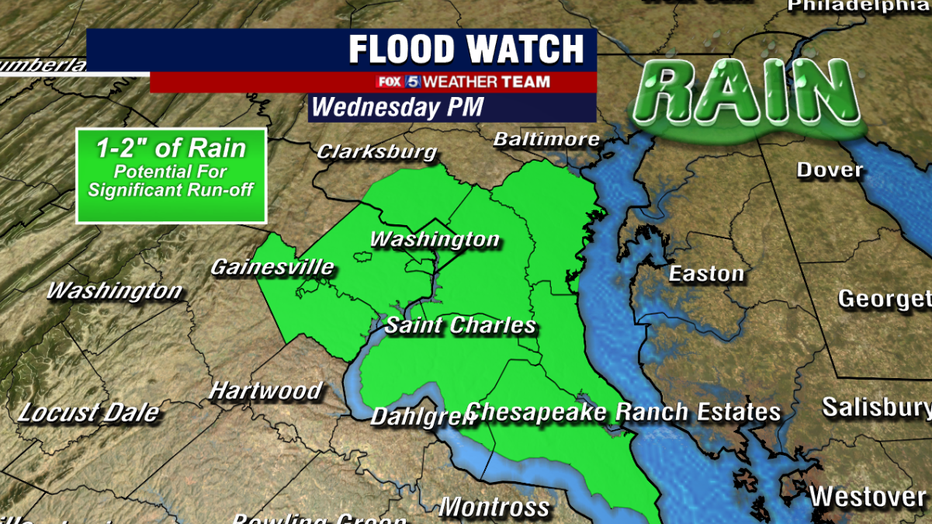 In fact, there was a rather unique situation going on today where parts of Montgomery, Fairfax, Prince William counties as well as D.C. are under both Winter Weather Advisories as well as Flood Watches. Southern Maryland is included in this Flood Watch as well for this afternoon. This is because rain is expected to be pretty heavy at times.

After most of the region picked up over an inch of rain on Monday morning, the threat for another 1 to 2 inches of liquid rain over the region could lead to some localized flooding issues. Overnight tonight, some isolated refreeze will be possible.

FOX 5's Lauren DeMarco is in Tysons where the snow gave way to rain today, but road crews remain at the ready as conditions could change.