A complex of showers and thunderstorms more than 600 miles off the coast of Mexico has gained enough organization to be called Tropical Storm Darby in the Eastern Pacific.

Tropical Storm Darby has maximum sustained winds around 40 mph and is moving westward at 16 mph.

The National Hurricane Center expects Darby to become a hurricane on Monday while out over the open Pacific waters.

On the current projection, Darby will only be a threat to marine interests over the next week. 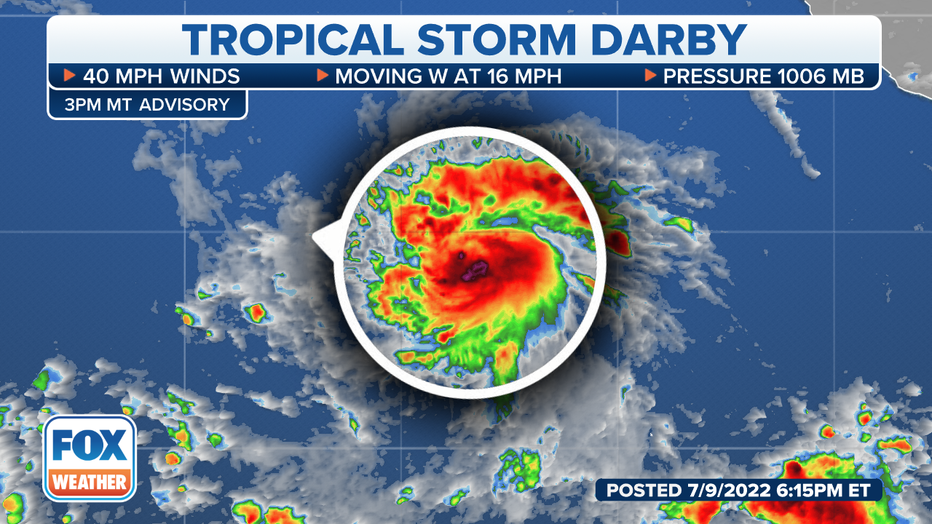 The cyclone is expected to start gaining latitude by midweek, which will have critical implications for the cyclone’s future and how close the system will venture to Hawaii.

A more northern track in the Eastern and Central Pacific means the cyclone will approach waters that are too cool to sustain tropical activity and upper level winds, known as shear, that will be not be conducive for strengthening.

Forecasters expect Darby to start feeling the effects of the more hostile environment by Wednesday, and the system could weaken back into a tropical storm by Thursday. 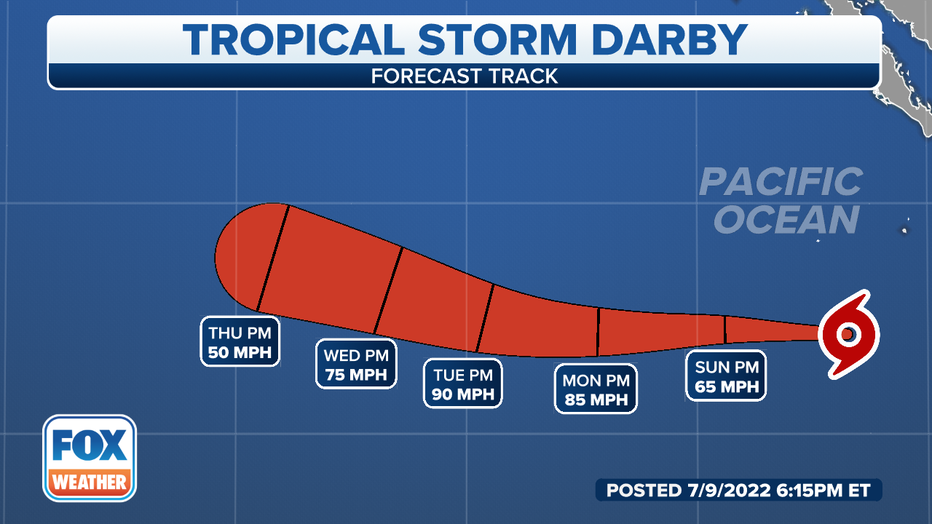 The cyclone is expected to still be about 900 miles east of Hawaii by the end of the workweek.

Forecast models show a continued deterioration of the system’s structure and organization beyond the forecast cone.

The cooler than average waters in parts of the Central Pacific and the increased wind shear are classic products of a La Niña that is in control of weather patterns. 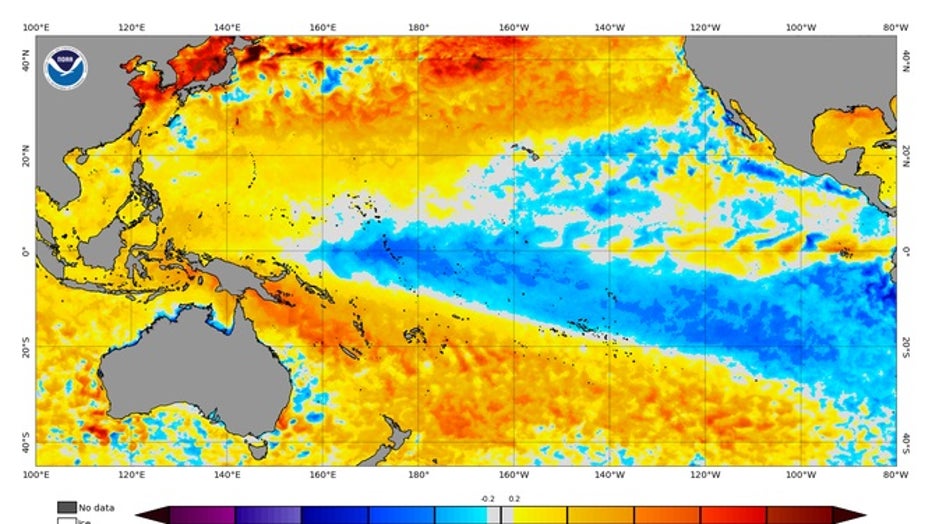 According to recent satellite data, a large part of the real estate ahead of the cyclone has water temperatures in the mid to upper 70s, which is considered cool for tropical activity.

WHY ARE THUNDERSTORMS SO RARE ALONG THE PACIFIC COAST

Hawaii has a history with the "Darby" name

If you have heard the name "Darby" associated with hurricanes before, your mind is not playing tricks on you.

The World Meteorological Organization reuses cyclone names every six years, if they don't meet the threshold for retirement.

"Darby" has been used to name tropical cyclones in the Eastern Pacific for decades, but during its last showing in 2016, the system impacted Hawaii.

Ocean temperatures and atmospheric conditions are quite different this year than six year ago, when the tropical storm impacted the islands in late July.

Tropical Storm Darby made landfall on the Big Island on July 23 with winds of around 40 mph. 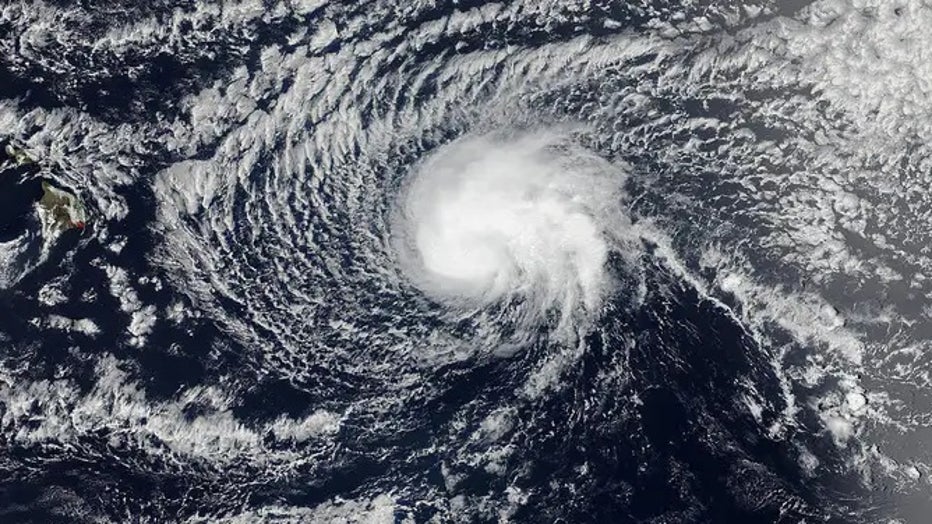 Hurricane Darby weakened into a tropical storm before impacting Hawaii in July 2016.(NOAA)

According to NHC data, there have only been 16 landfalling cyclones in the Aloha State, many of which took place during or around El Niño weather patterns, when water temperatures are warmer, and there is less shear in parts of the Pacific. 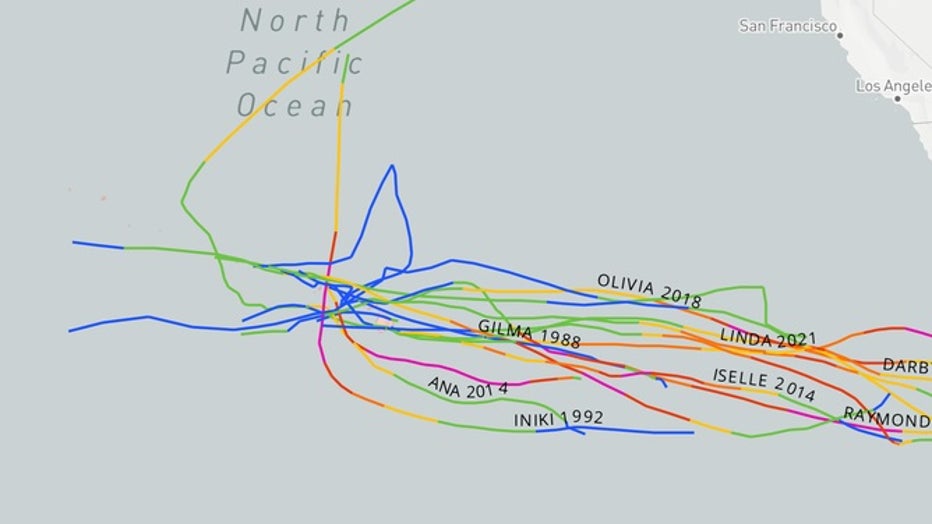 Only 16 tropical cyclones have made landfall in Hawaii in recent memory.(National Hurricane Center)

There were no reported fatalities on the islands and most impacts were considered to be minimal.

Meteorologists say warmer than average water temperatures in 2016 and periods of reduced shear likely helped "Darby" stay intact longer and helped keep the system classified as a tropical storm as it impacted the Big Island. 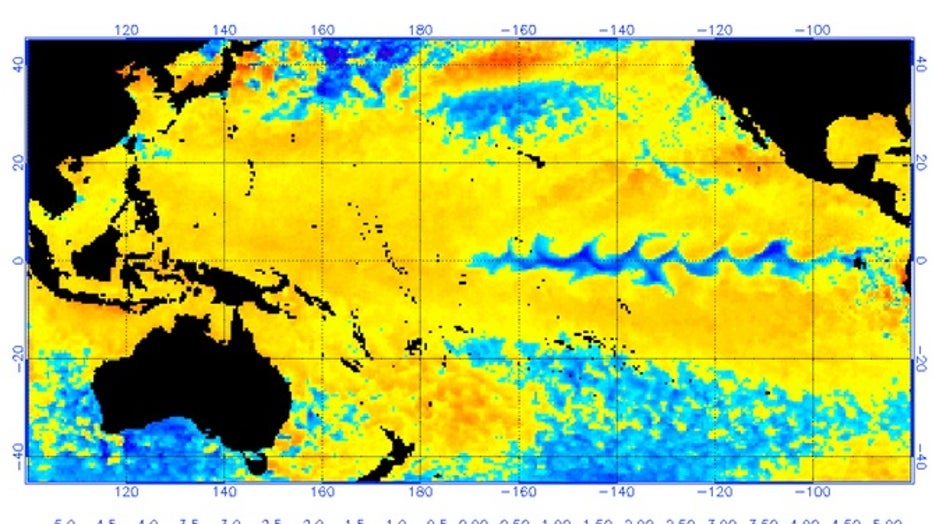 Water temperature anomalies in 2016 shower warmer stretches of the Pacific than normal.(NOAA)

The Eastern Pacific is running ahead of what is considered to be an average season.

Typically, the fourth named storm doesn’t form until July 15, and that generally is the same date when the season’s second hurricane is christened.

The apparent busier than average year is thanks in part to Bonnie, which formed in the Atlantic basin and crossed over into the Pacific.

Because of the cross-over, the hurricane season in the Eastern Pacific will be known for having two "B" named storms.

The next storm name will be "Estelle."

The hurricane season in the Eastern Pacific runs through November 30. 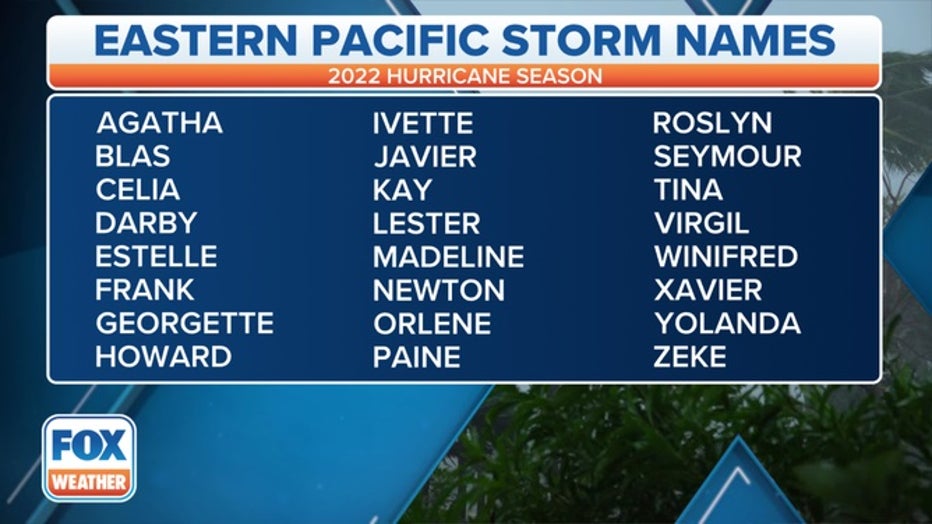 A table showing an alphabetical list of the 2022 Eastern Pacific tropical cyclone names as selected by the World Meteorological Organization. The official Eastern Pacific hurricane season runs from May 15 through Nov. 30. (FOX Weather)