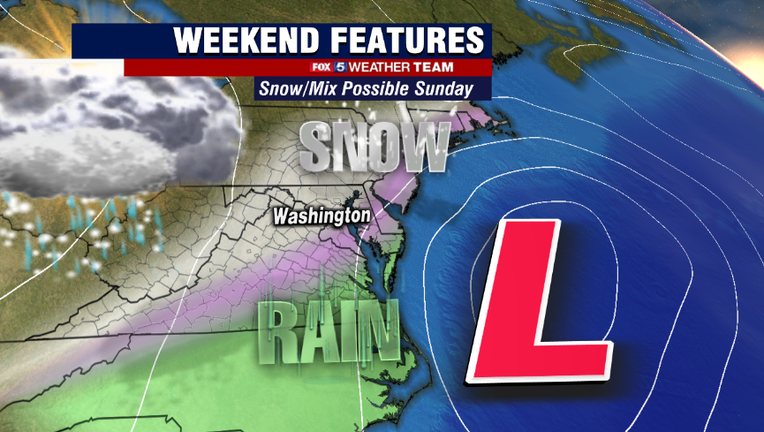 WASHINGTON - Weather models have been playing a little bit of ping pong with us this week. Earlier this week they were indicating the threat for a sizable snow event here on Sunday. Download the FOX 5 Weather App

However, by the middle of the week they had completely gotten ride of the storm, so much so that the midweek forecast for Sunday actually called for some sunshine! Yesterday afternoon, these some models began to indicate that they may have been a little too fast to completely eliminate our snowfall chances.

Tucker Barnes has the FOX 5 Weather forecast for Friday, February 5. 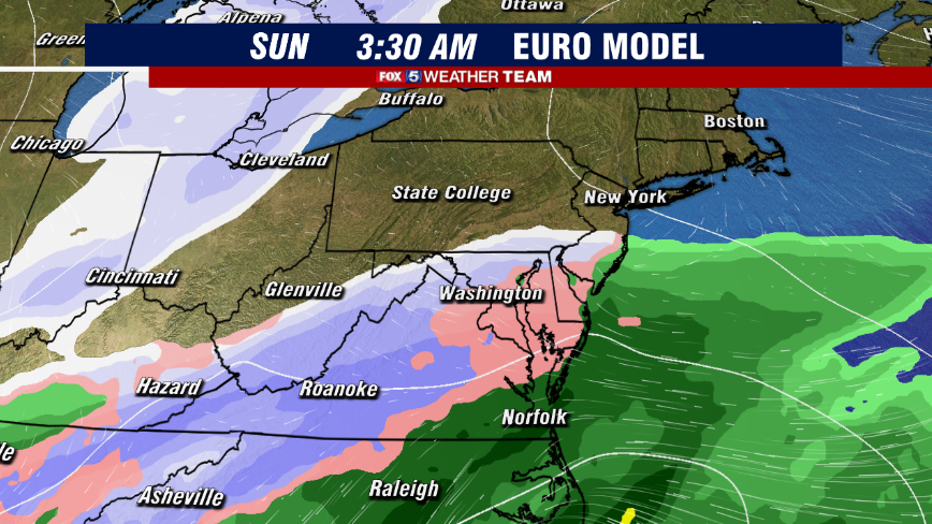 Now, to begin just know that this does not look like anything like we dealt with earlier this week. That was a much more prolonged storm that this one is forecast to be. By comparison, this one should be much more of a "quick punch" for our area.

It all begins after midnight on Sunday when moisture starts to push into our region from the south. It is likely to start as a little bit of rain, sleet, or mixture across our region as it pushes in.

Timing is the key to this storm system as it's pushing in during the overnight hours, during what is typically your coldest time period of the day. Otherwise, it likely would have just been a rain maker. 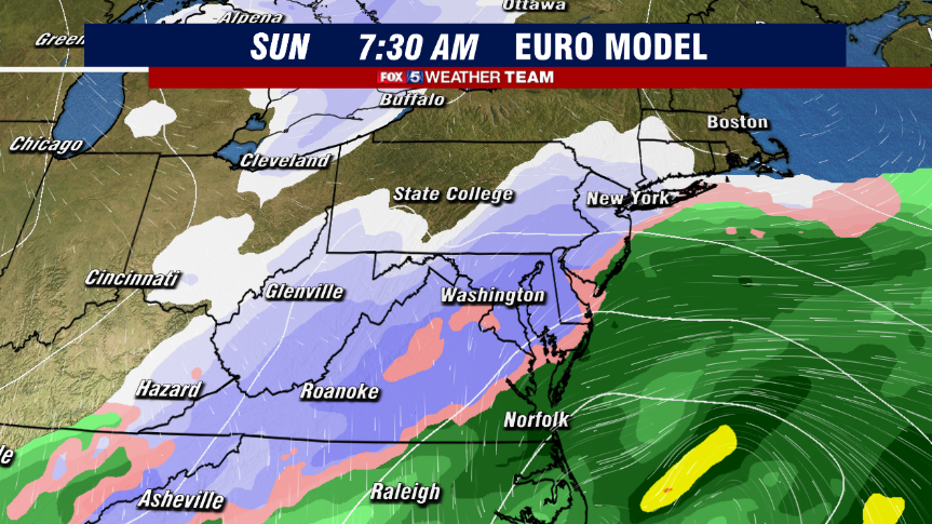 By sunrise, the threat is there for widespread snow across the DC region, with bands of moderate snow along with pockets of mix around the area.

Temperatures a likely to be right around if not a few degrees below freezing across the DC region, and a few inches of snow could fall over a period of a few hours across the area. Travel on Sunday morning could be a little bit tricky with some slick roadways.  Download the FOX 5 Weather App 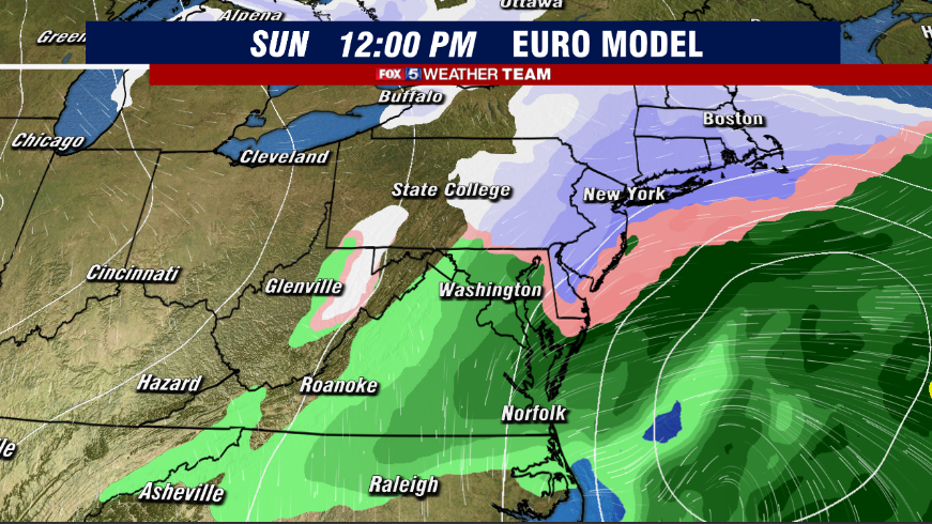 Beyond sunrise though, we should start to see some warmer air aloft sneaking into the DC region, changing snow over to a mix and eventually rain which should lead to some compaction if not some wash away of any snow that did happen to fall during the early morning. By the early afternoon, the system should be exiting our region, and we should be dry by the middle of the day. 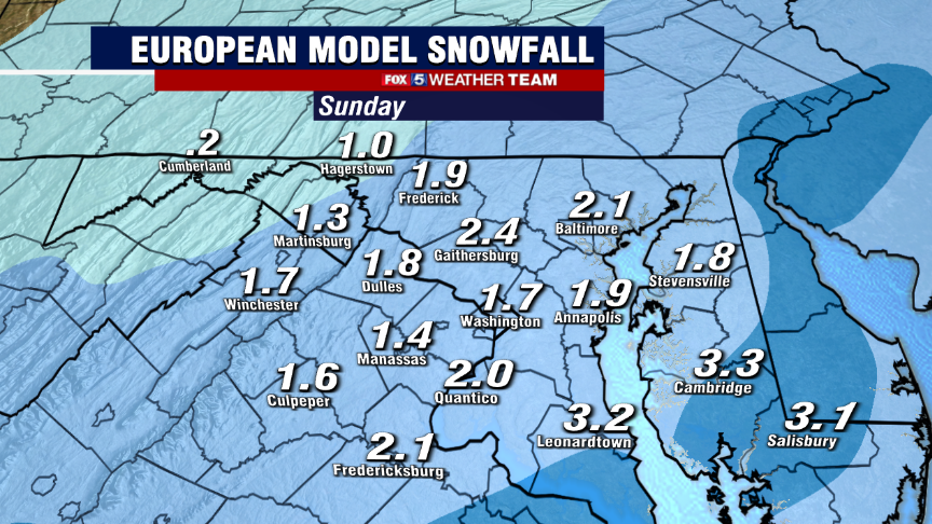 So how much snow could potentially fall? Latest guidance as of this morning suggest the potential for anywhere from 1-3" of snow across the area. Not a major winter storm by any sense of the word, but certainly enough to cover some roadways and lead to some slick spots on Sunday morning. 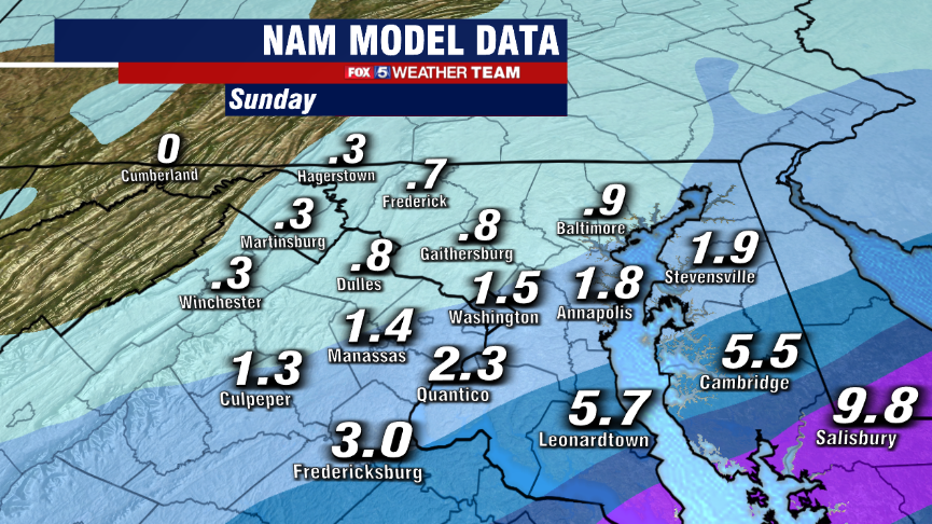 As usual, where exactly you live in the DC region will impact how much snow you get. However, with the track this particular storm is taking, southeastern areas do have a better shot at seeing some of the steadier storm bands and therefore potentially more snow than those to the northwest.

Something that is pretty rare as far as snowfalls typically go in our region, but it does happen from time to time, all depends on the exact track of the storm and how much cold air is available. 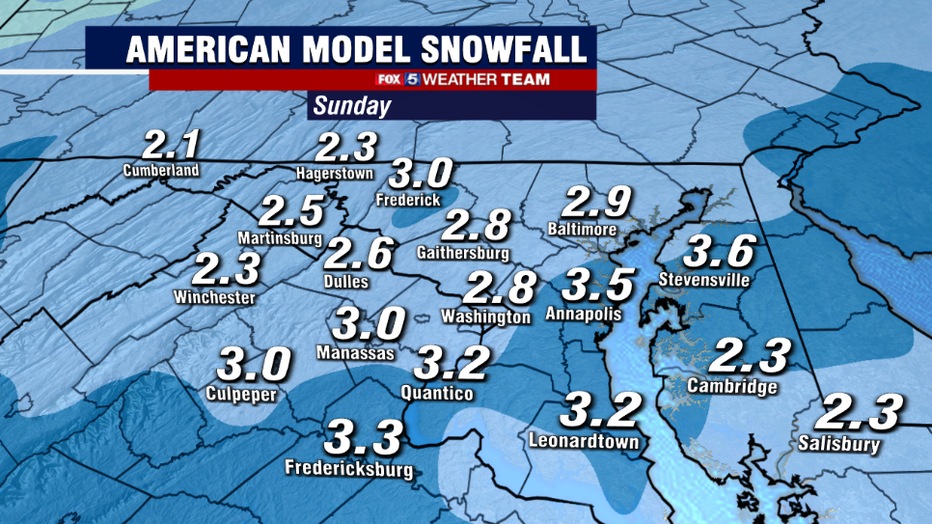 Now one very important thing to note is that this system has already changed so much on us just in the last 48 hours. While this morning, the vast majority of weather guidance is in general agreement on a threat for 1-3", there is still the chance that snowfall totals could go up or down depending on the exact track of the system.

Weather models have shifted this track so much in just the last 24 hours that we will likely see more changes to forecast snow totals before the storm arrives on Sunday. This is a pretty low confidence forecast at this stage given how inconsistent these weather models have been. 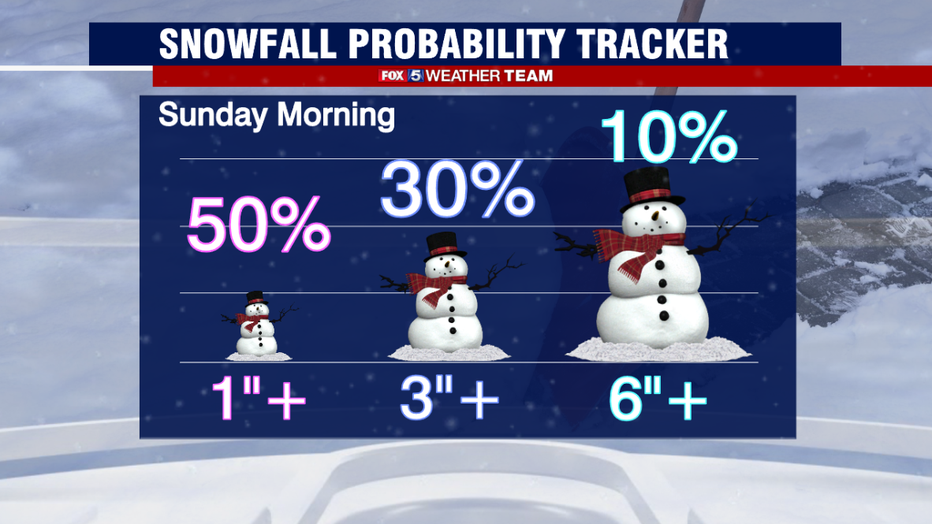 Keep it tuned to Fox 5 on air and online, and your weather team will continue to keep you posted on this winter threat all weekend long.