Wednesday morning may surprise us with a little sneak attack of snow!

WASHINGTON - One thing is for sure -- the early week is going to feel a bit more like early fall as opposed to late fall. A strong storm system will be getting its act together across the Great Lakes region. Strong southern flow through multiple levels of the atmosphere will warm us nicely after a chilly weekend. Temperatures are expected to rise into the upper 50s and lower 60s by Monday afternoon with more widespread lower 60s by Tuesday afternoon. It will be warm enough that the last thing on one's mind would be the threat of snow. 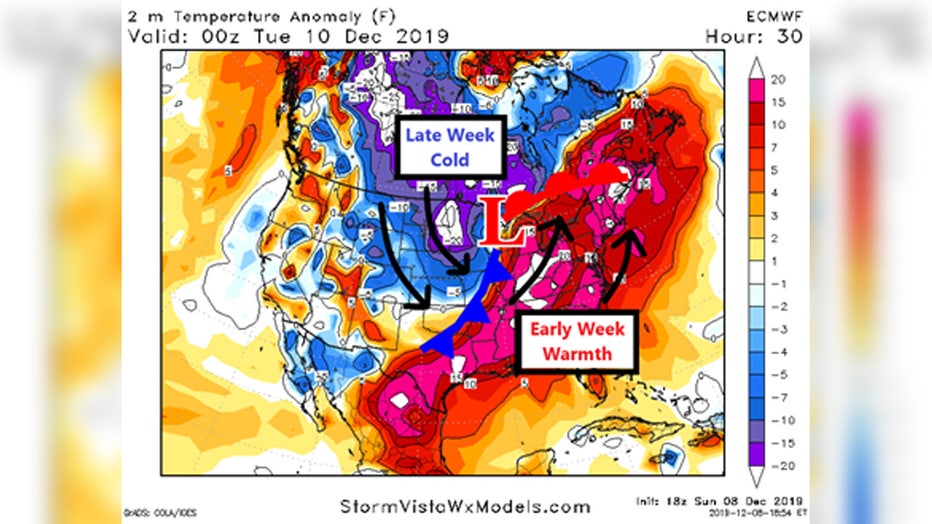 But Wednesday morning may surprise with a little sneak attack!

Late Tuesday night -- a cold front will cross the region, causing temperatures to crash from those 60s to near the freezing mark by the time sunrise arrives on Wednesday morning. It is along this boundary that a separate, weaker storm system may ride along early Wednesday. This system is the one that could throw enough moisture back into the incoming cold air that morning commuters may be heading into work under snowflakes on Wednesday morning.

There are two keys to this event on Wednesday night. The first is the arrival of cold air, which models always seem to overestimate (meaning they forecast it to be too cold) too quickly when we are bringing in the colder air from the northwest, mostly because they underestimate the "damming effect" that the mountains to our northwest have on that cold. The second is the strength of the wave that will be trying to develop along the front on Wednesday morning. The more intense the wave, the more intense the burst of snow could be. In order for snow to stick and cause issues when ground temperatures are not below freezing (and they will not be Wednesday morning) is you need it to come down steady to heavy so that the rate of sticking exceeds the rate of melting.

So naturally, the biggest question, of course, is do we have to worry about anything sticking? Any sort of school delays or cancellations? To be honest the potential is there. But will it be realized? What is the most we could be looking at here in the D.C. region?

Let us take a look at a few of the model guidance expectations: 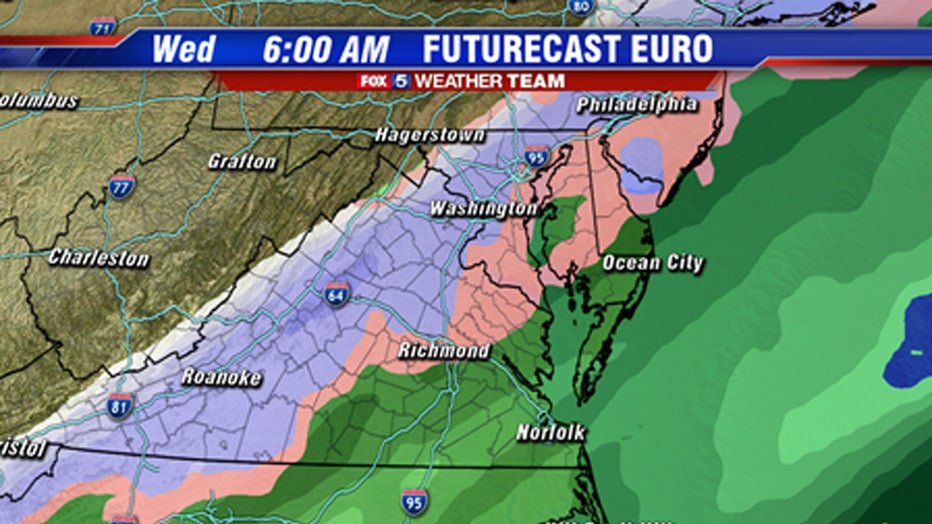 The European model is widely considered by forecasters to be the most accurate model in our arsenal in the middle range forecast period. Of the models out there for this forecast, the European is perhaps the tamest with this event. While it does show some snow falling in D.C. around the sunrise hours, it is not particularly heavy for the I-95 corridor, because the wave that rides the cold front is relatively weak. It is also the warmest, keeping temperatures above the freezing mark in the District for the duration of the event. 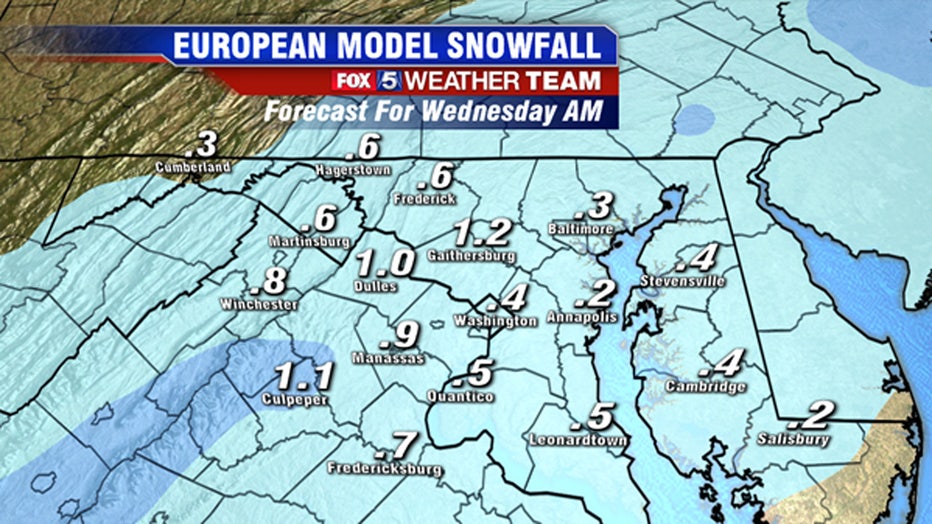 This doesn't mean the model does not give anyone snow. In fact, it does give some folks northwest of the I-95 corridor and out towards the Interstate 81 corridor could have to deal with a coating of snowfall, perhaps as much as a dusting to 2 inches in some spots. But you can see in the included image that it is much patchier, as opposed to a consistent swath of snow coming across. Still, folks in areas like northern Montgomery County, Loudoun County, western Fauquier and Prince William should keep their eye on this system as these are the areas the European model is saying could pick up on several inches of snow. 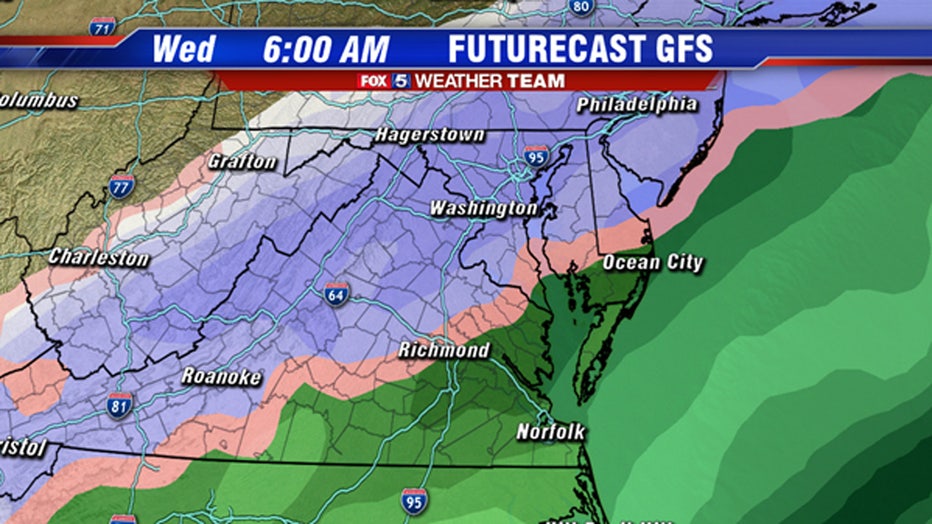 Then we have the American model, which has what I would say would be a "jackpot" scenario for this particular event. It is doing what the European is not doing in order for this event to be more of a snowfall event for our area. It has temperatures falling faster than the European model, and it has a much more defined and stronger wave running the frontal boundary on Wednesday morning from south to north, throwing more moisture back over the incoming cold air, resulting in some heavier snowfall rates. 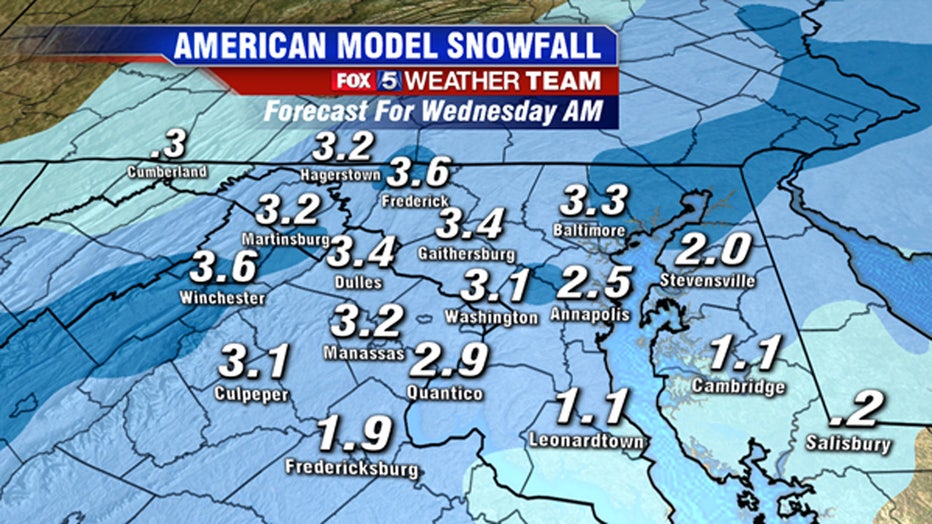 The result of heavier snowfall is that we would likely have to deal with some accumulations even here in the Washington, D.C. metro area. The model shows a much more widespread swath of accumulation snows in the 2 to 4-inch range right along the Interstate 95 corridor and the surrounding counties. Again, as things stand right now, I would caution that this is much more a "worst-case scenario" that the American model is showing, verses current more realistic expectations given the general setup. Another model that we commonly use, the North American Model (not shown here) is much closer in line to the European model at this time with keeping measurable snow farther northwest of the Interstate 95 corridor as well. 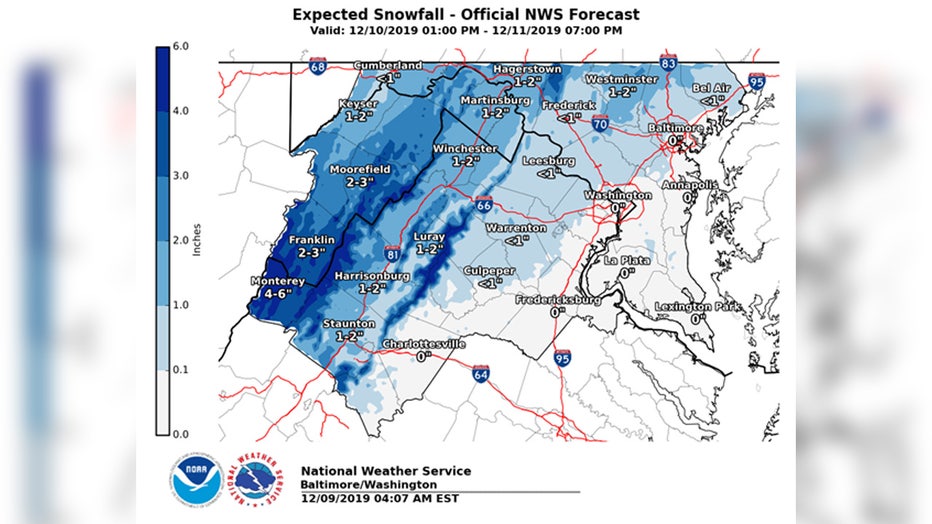 As of Sunday evening, the local National Weather Service was giving the Washington, D.C. metro area just a 60 percent chance of seeing a coating of snow, and a 35 percent chance of 1 inch or more, instead keeping the accumulating snows out closer to the Interstate 81 corridor, where temperatures are expected to drop faster. As things currently stand, I would not personally say that we do have a chance to pick up our first accumulating snow of the season on Wednesday morning, however, our area is rather notorious for underperforming on these types of rain to snow events. It is definitely something to keep an eye on though, but we do still have a couple of days to watch it yet before any potential impacts. We will certainly keep you posted. 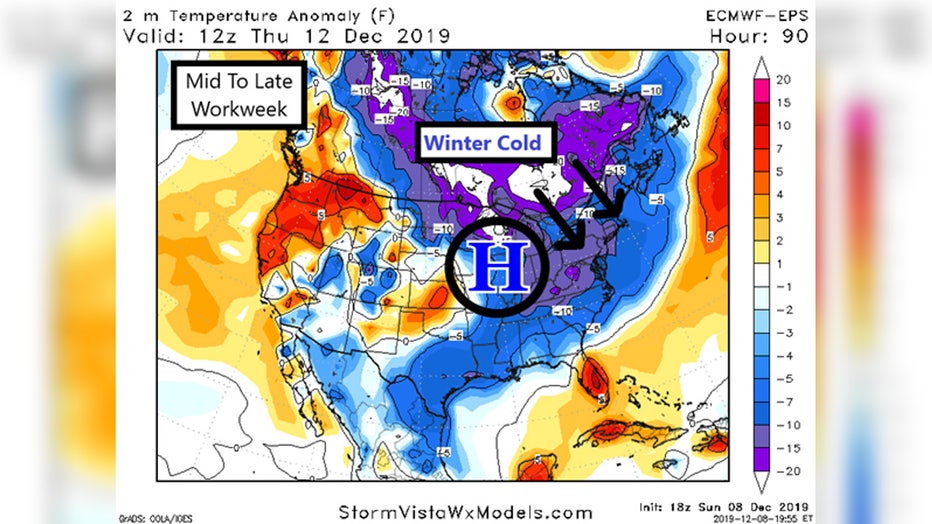 One thing that is not in question is that once the cold does get here, you will feel it. Winds will be gusting just about all day on Wednesday as the colder air spills into our region. Thursday will feature more sunshine returning to the area but will be the coldest day we have seen yet this fall with afternoon temperatures struggling to rise just above the freezing mark in many locations. The second half of your work week will be a cold one, but it should at least be a dry one as well. Temperatures should moderate to more seasonal levels by the weekend as well. Wednesday is also the only snow risk we currently see in the forecast period as we start the run-up to Christmas, at this time.