WASHINGTON - It has been an up and down week to say the least. Monday brought the warmest temperatures and first 80 degree day of the year so far, our earliest here in D.C. in about four years, while Wednesday brought back winter cold with a soaking rain for most of the day.

A much more vigorous storm system could approach our region by the weekend though, causing some major impacts to travel for those in the Northeast corridor.

A much more vigorous storm system could approach our region by the weekend though, causing some major impacts to travel for those in the Northeast corridor. 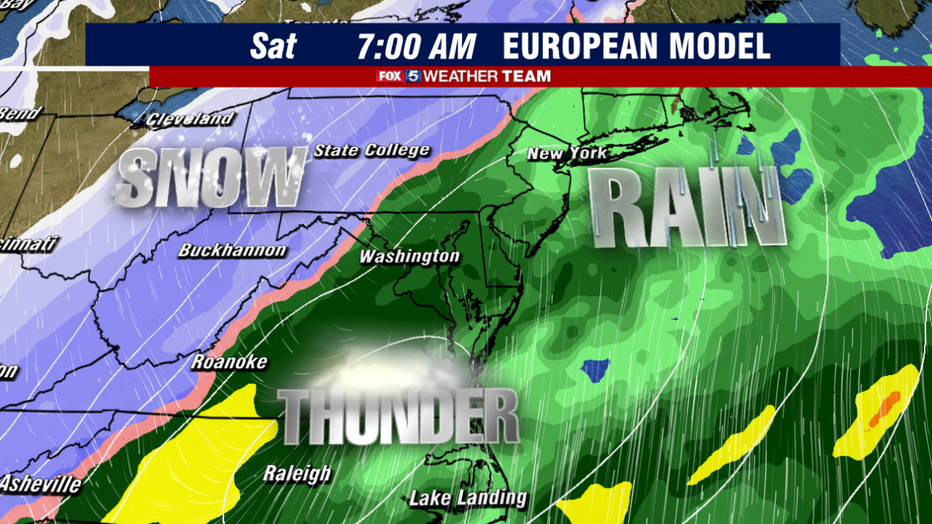 Depending on the exact track of the storm, there is even the potential for some thunderstorms or even some severe weather as the central low pressure pushes across our region on Saturday morning, likely around the sunrise hours. 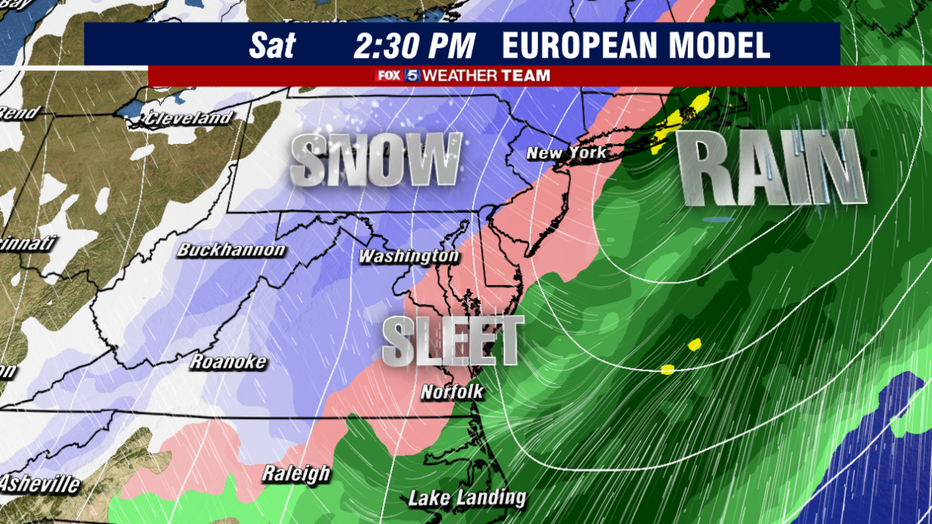 As the storm pushes northward, it is forecast to rapidly intensify, a process known as bombogenesis, which is where the term "bomb cyclone" comes from. As it does so, very cold air will  be forced southward on a strong northern wind on the backside of this late season nor'easter.

Temperatures will fall quickly throughout the day on Saturday. If they fall fast enough, northern zones could see rain transition over to a wet, accumulating snowfall up towards the Mason-Dixon Line and the panhandles of Maryland and West Virginia. 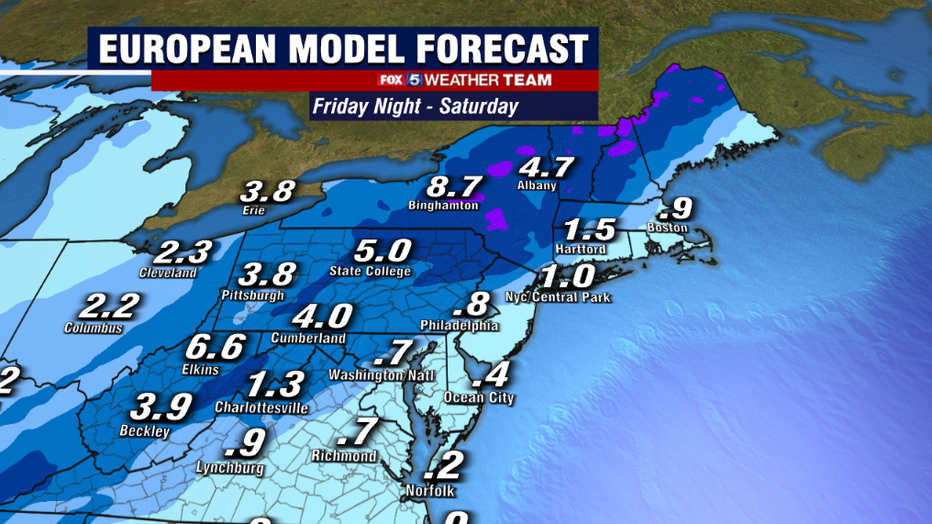 If enough moisture is present as the storm pushes to the north, even the I-95 corridor could see some sleet or a few flakes mix in as the storm system pulls away to our northeast. A broad upper level trough swinging through the region on Saturday could provide the lift needed for one final batch of precipitation as the storm pulls away.

Many times through, weather models are too aggressive with how fast they pull the cold air south into our region. Particularly when forecasting out a couple of days. Often times the cold sufficient for accumulating snowfall lags the model by several hours, allowing the precipitation to exit before the coldest temperatures move in at the surface. 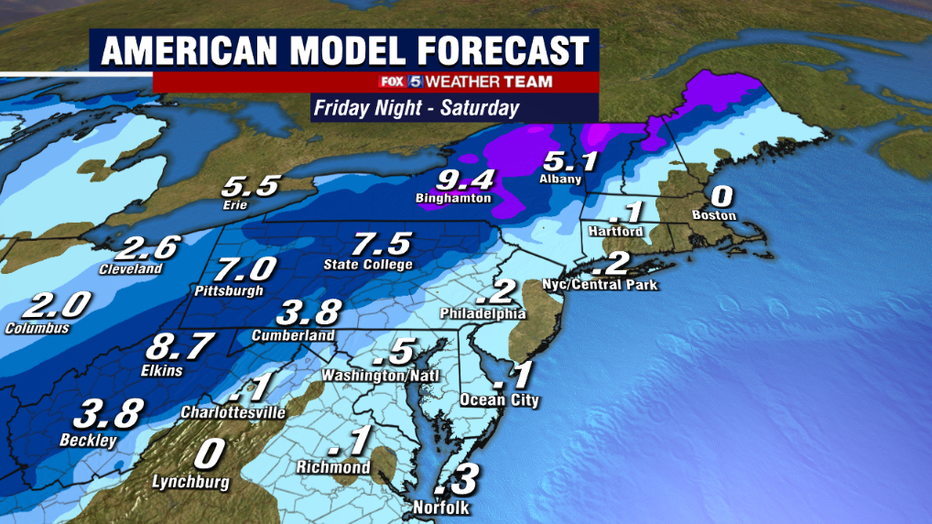 That's not to say that accumulating snow will not be possible for parts of our region. Those to the north, up towards the Mason-Dixon Line and those west of the I-81 will have the shot at up to a couple inches of wet snowfall. More than that could fall in the mountains, where the highest peaks could see over half a foot of snow.

Winter Storm Watches were issued in these areas this morning. Around I-95 and the D.C. metro region, while some models are indicating the threat for an inch or so of snow, this is not the favored solution. Warm ground temperatures would likely limit this threat. 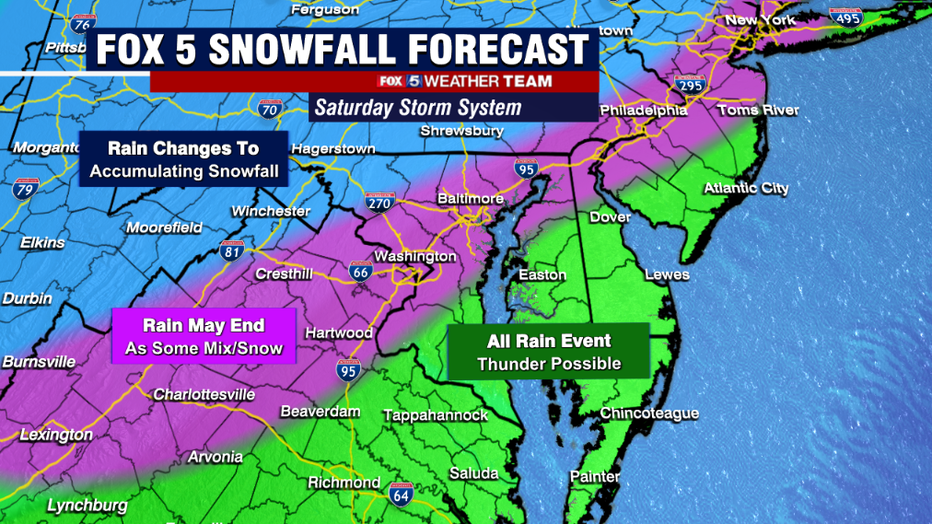 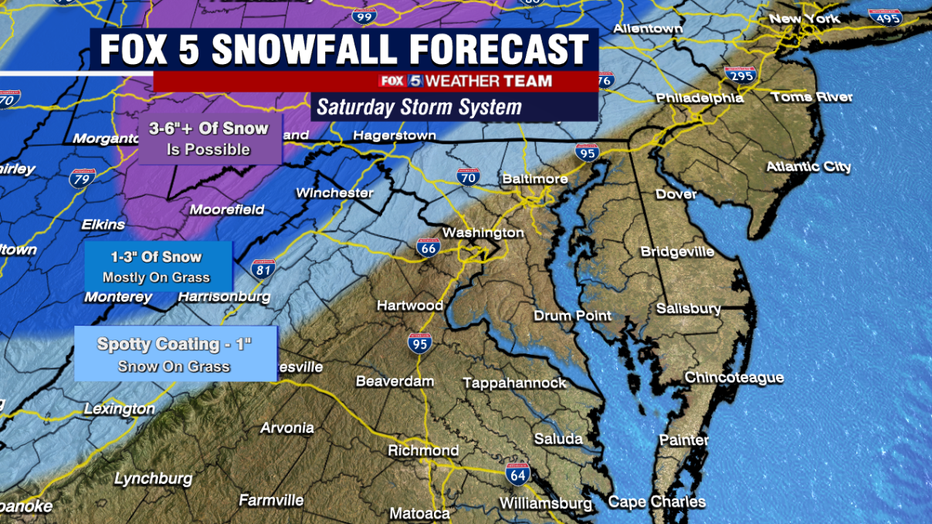 Our region also has a very well documented tendency to under perform on rain-to-snow scenarios, particularly this time of year. If anything, a "white rain" where snow briefly falls and melts on contact, or perhaps an isolated light coating on grassy surfaces is the favored scenario.

But the more likely one is that precipitation moves out before that transition over ever occurs. We are not expecting an impactful winter event in the immediate D.C. and Baltimore metro areas. Impactful and potentially significant snows will be confined to the interior regions of Pennsylvania, New York, and New England with this particular winter storm. 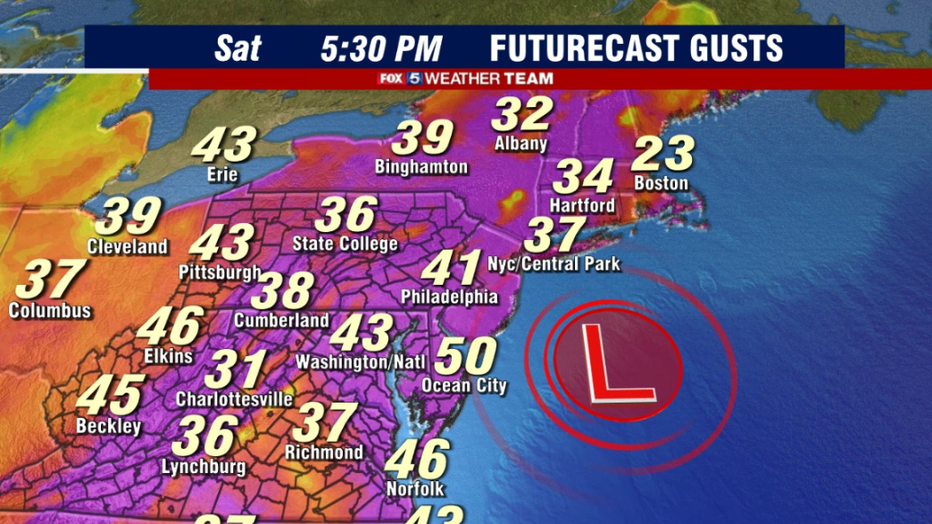 That's not to say that this storm will not be impactful. Locally the most concerning aspect of the storm may in fact be the very gusty winds that come along with the deepening cyclone. How strong they will be depends heavily on the track of the storm and exactly how rapidly the cyclone intensifies. Winds after all are a response to differences in changes of pressure in the atmosphere.

So a rapidly deepening, stronger cyclone will produce a stronger wind field. While the details still need to be worked out, at this time it does at least appear like advisory level winds with gusts of 40-60mph could be possible throughout the day on Saturday. This could be enough to cause some damage to still weak trees across the area and lead to possible power outages.

Travel across the region and the entire northeast is likely to see heavy impacts from this storm as well. Expect the possibility of some significant flight delays at the region's major airports. 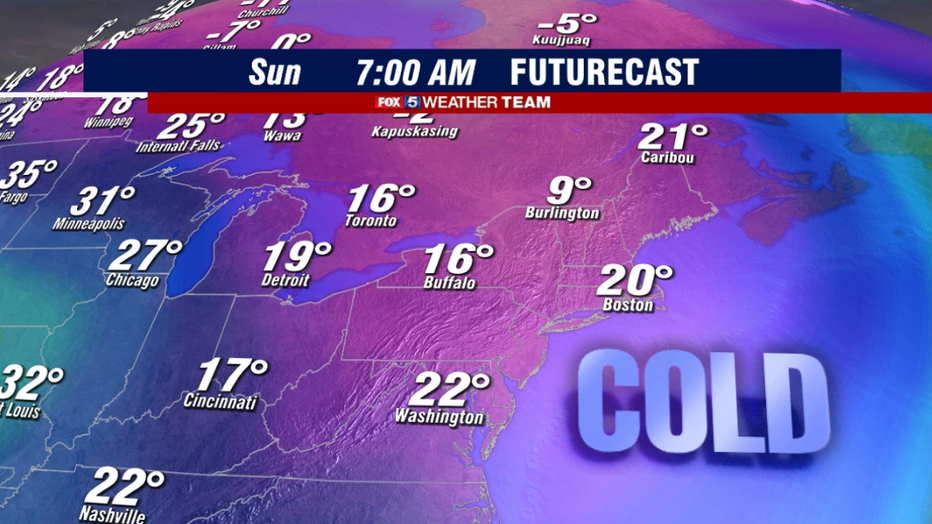 The final impact of this massive storm system will be the one that you feel on Saturday night into Sunday, as the cold air settles in behind the storm. Temperatures by Sunday morning will be in the widespread 20s, with northwest zones possibly seeing teens.

We will have to closely watch to see how far along spring foliage is at this point, specifically the cherry blossoms, as temperatures well below freezing and strong winds can be very damaging to the blossoms in certain stages. Afternoon high temperatures will only peak in the 40s with a steady breeze, despite sunshine. It will be a cold weekend for the middle of March. 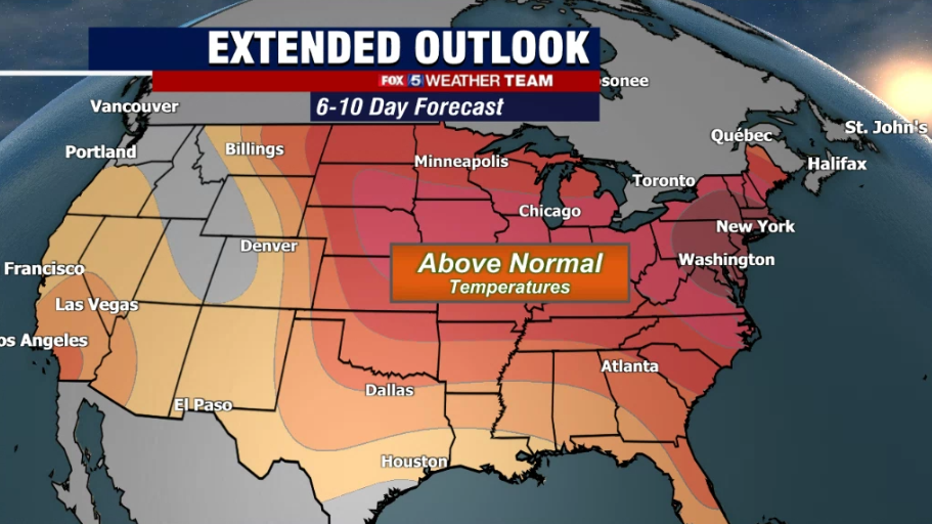 I want to end on a positive note for spring lovers though. The cold this weekend will be very short-lived. In fact, models indicate that by as early as Monday afternoon, temperature in our region may return to the 60s, with next week looking considerably quieter, sunnier, and warmer than the current week we are in.  The seasons often change on the back of some significant storms.

Much like the big winter storm in early January that really ushered in the cold for our region, winter seems to want to say goodbyes with one more big storm system. Beyond it, spring warmth does look like it wants to settle in a little more consistently as we begin the final full week of the winter itself. Hang in there!