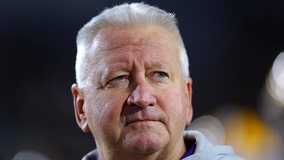 An ESPN anchor was criticized Saturday for his comments about LSU offensive coordinator Steve Ensminger losing his daughter-in-law, sports reporter Carley McCord, in a plane crash that killed four others while they were on their way to the Peach Bowl for the College Football Playoff semifinal.