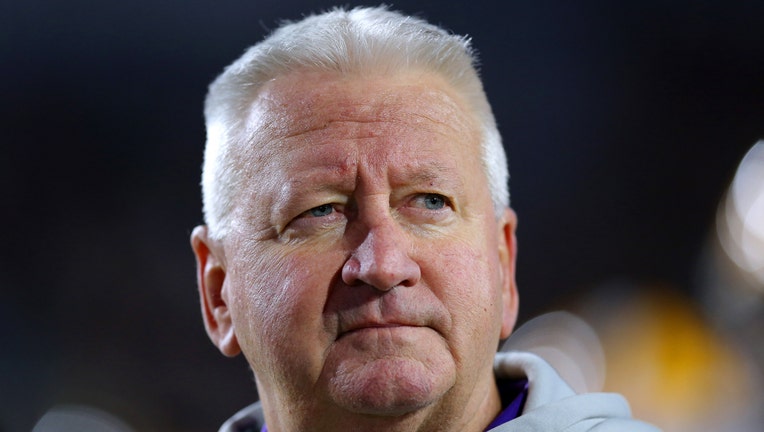 Offensive coordinator Steve Ensminger of the LSU Tigers reacts during a game against the Mississippi Rebels at Vaught-Hemingway Stadium on November 16, 2019 in Oxford, Mississippi.

ATLANTA - An ESPN anchor was criticized Saturday for his comments about LSU offensive coordinator Steve Ensminger losing his daughter-in-law, sports reporter Carley McCord, in a plane crash that killed four others while they were on their way to the Peach Bowl for the College Football Playoff semifinal.

Matt Barrie, who has worked with ESPN’s “SportsCenter” since March 2013, was anchoring pregame coverage before kickoff when he made the comments hours after the plane crash.

“Certainly our thoughts and prayers with coach and his family, as he gets to do his job and try to put away the distraction of losing his daughter-in-law just hours before kickoff,” Barrie said.

McCord was identified as one of the five people flying to the game in Atlanta who were killed in a small plane crash in Lafayette, La. According to The Washington Post, Ensminger didn’t want his players to find out about the incident but some found out anyway.

McCord was a New Orleans-based freelance sideline reporter who worked for WDSU-TV in New Orleans.

Ensminger, 61, didn’t speak after the game. LSU’s passing game coordinator Joe Brady said the coach was struggling a bit during the game as the two sat in the booth above the field.

“It definitely got emotional before the game,” Brady said. “I can't think of what he was able to do today with the circumstances. It speaks to the type of man he is.”