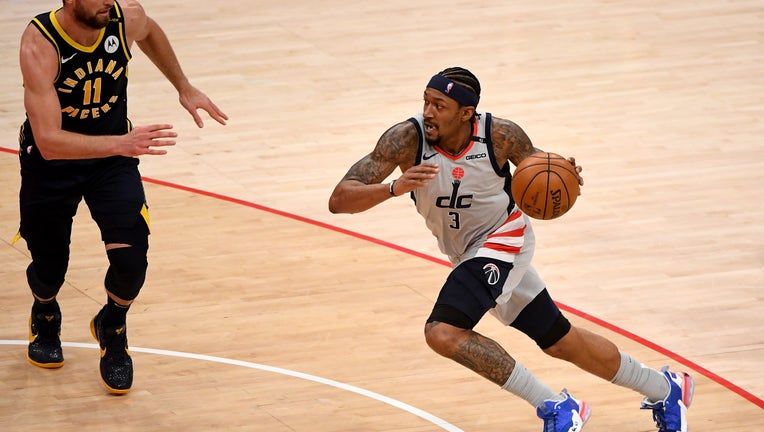 WASHINGTON, DC - MAY 20: Bradley Beal #3 of the Washington Wizards dribbles in front of Domantas Sabonis #11 of the Indiana Pacers during the first half at Capital One Arena on May 20, 2021 in Washington, DC. NOTE TO USER: User expressly acknowledges

WASHINGTON - Russell Westbrook and Bradley Beal did what they do — a near triple-double for one, 25 points in just 29 minutes for the other — and the Washington Wizards reached the NBA playoffs as the Eastern Conference’s No. 8 seed by overwhelming the Indiana Pacers 142-115 in the play-in round Thursday night.

Washington led by as many as 38 points and advanced to face Joel Embiid and the No. 1 seed Philadelphia 76ers in the first round, marking quite a turnaround for coach Scott Brooks' crew, which was 17-32 in early April.

A little more than a week after breaking Oscar Robertson’s career record for most regular-season triple-doubles, Westbrook finished Thursday with 18 points, 15 rebounds and eight assists, and it was Beal — second in the NBA in scoring two years in a row — whose 3-pointer opened up a 30-point lead at 98-68 with about four minutes left in the third quarter.

Beal skipped the fourth quarter entirely. Westbrook sat out the last 8 minutes and tossed his shoes to a fan.

The backcourt mates both heard "M-V-P!" chants during trips to the foul line, as did reserve center Robin Lopez in an appreciative if more tongue-in-cheek way, from a giddy crowd capped at 5,333 — a quarter of the arena's capacity — because of COVID-19 concerns. The coronavirus pandemic is also why the season consisted only of 72 games, instead of the standard 82, and the league created the play-in format involving teams that were 7-10 in each conference.

The Wizards went 17-6 over the last six weeks of the season to finish with the eighth-best record in the East, but then lost the 7-vs.-8 game at the Boston Celtics 118-100 Tuesday. The Pacers won the 9-vs.-10 game at home against the Charlotte Hornets 144-117 that night.

Washington averaged 139.7 points while sweeping the three-game season series against the Pacers and, well, this one had much the same feel. It was close until a little more than 1 1/2 minutes elapsed in the second quarter, when the score was 34-all.

From there, Westbrook took over for a bit, bullying his way through the lane and mean-mugging Pacers players. A 16-0 run fueled by six points from Lopez made it 50-34 and prompted the Pacers to take a timeout. They never recovered.

Heading to the sideline for the break, Westbrook paused on the court to raised a hand and wiggled his fingers while looking into the stands, pleading for more noise. Later, it was Beal — who has been dealing with a strained left hamstring — wind-milling his arms as he and his teammates poured it on, hitting 58.1% of their shot attempts; the visitors only finished above 40% thanks to some fourth-quarter baskets long after the outcome was decided.

Malcolm Brogdon led Indiana with 24 points. Pacers All-Star Domantas Sabonis had a triple-double with 19 points, 11 rebounds and 10 assists before fouling out early in the fourth quarter.

They now head into the offseason, while the Wizards are back in the postseason after missing out the past two years before acquiring Westbrook in a trade that sent John Wall to Houston.

Washington dealt with a COVID-19 outbreak that affected more than half of its roster and led to a two-week hiatus. The team also lost two starters for the season with injuries: first-round draft pick Deni Avdija (broken right ankle) — he took shots in the paint while seated on a black folding chair before Thursday's game — and center Thomas Bryant (torn left knee ligament).