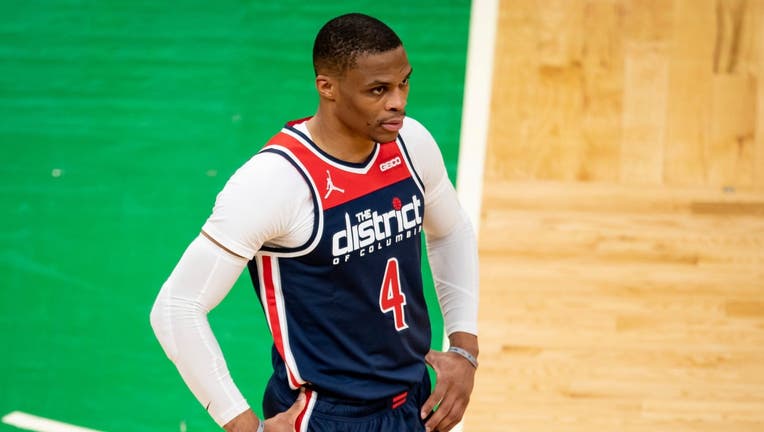 Russell Westbrook #4 of the Washington Wizards reacts during the second half of a game in the play-in tournament against the Boston Celtics at TD Garden on May 18, 2021 in Boston, Massachusetts. (Photo by Maddie Malhotra/Getty Images)

BOSTON - Jayson Tatum scored 32 of his 50 points in the second half, and the Boston Celtics rallied to beat the Washington Wizards 118-100 in the play-in round on Tuesday night.

Kemba Walker added 29 points for Boston, which secured the seventh seed for the playoffs and a first-round matchup with second-seeded Brooklyn. That series opens on Saturday.

Washington will host Indiana, which rolled over Charlotte in Tuesday’s other play-in game, for the eighth seed on Friday. The winner of that game will face Philadelphia, the top seed for the Eastern Conference playoffs.

The Celtics played without second-leading scorer Jaylen Brown, who had season-ending wrist surgery last week. He sat courtside to support his teammates, but they missed his offensive production in the first half while they struggled to get into a flow.

That changed in the third quarter. Boston opened the second half on a 22-4 run, opening a 74-58 lead.

Boston followed Tatum’s lead. The All-Star forward created space for open jumpers and drew contact in the lane. He was 17 of 17 from the free-throw line.

Beal, who is dealing with a tender left hamstring, didn’t have his usual explosiveness early on. He did his best to keep pace with Tatum and Walker, but the Wizards struggled with turnovers and cold outside shooting for most of the night.

Washington led 54-52 at halftime, shooting 50% from the field and getting a boost from its reserves, which outscored its Boston counterparts 22-6 in the opening 24 minutes.

The Celtics didn’t help themselves by shooting just 35% in the half, including 29% (7 of 24) in the second quarter.