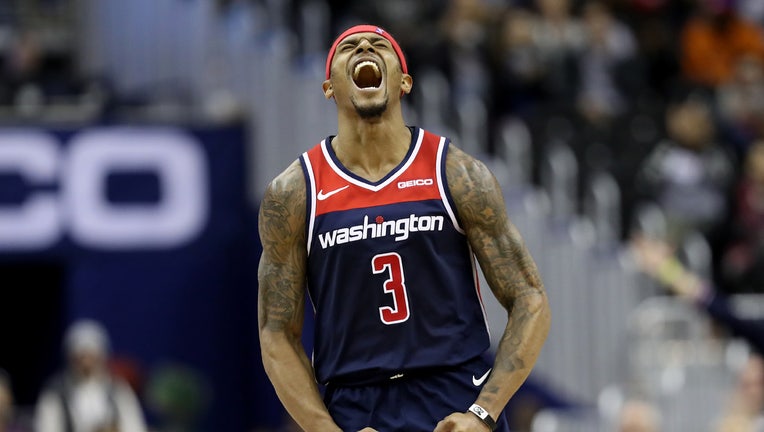 Bradley Beal #3 of the Washington Wizards celebrates after hitting a shot against the Toronto Raptors at Capital One Arena on January 13, 2019 in Washington, DC. (Photo by Rob Carr/Getty Images)

WASHINGTON - Bradley Beal has agreed on a two-year extension worth nearly $72 million with Washington, a major victory for the Wizards and a move that will keep the All-Star guard out of free agency for at least the next three summers.

The agreement was confirmed Thursday by Beal's agent, Mark Bartelstein. ESPN first reported the details of the extension.

Beal still had two years left on his existing contract. The extension kicks in for the 2021-22 season, has a player option for the following year and means that Beal won't be part of what has been shaping up to be an NBA free-agent extravaganza in the summer of 2021.

The Wizards were willing to give Beal a three-year extension that would have been worth about $111 million over three years. Beal went the two-year route and that protects his future options — he could opt out of the deal in the summer of 2022, coinciding with his 10th year in the league.

The 10-year milestone is significant: By having that many years of service, Beal would be eligible to sign a new deal worth in excess of $250 million over the next five seasons.

Wizards general manager Tommy Sheppard told a story as the team was getting ready to begin training camp of what he says to young players he meets for the first time: Work as hard as Beal.

"It sounds easy," Sheppard said. "Then you come in and you see all the work that Bradley puts in every day, all the leadership he exudes every day. He's shown time and time again how committed he is to D.C."

Beal has played more minutes than any other NBA player in the last two regular seasons, is one of only five players to not miss a game in that span — and is the lone player to have started all 82 games in both of those seasons.

He's an elite scorer, 12th in the league last season at a career-best 25.6 points per game. And he will be the centerpiece again for a Wizards team that's without point guard John Wall for the entire season as he recovers from an Achilles injury.

Sheppard said Beal is poised for yet another big year, and that the way he was interacting with teammates in recent weeks didn't give him any reason to believe he wasn't committed to the team.

"He's ready to play this season," Sheppard said at his preseason availability last month. "He's a fantastic, fantastic person. He makes the whole team be better."