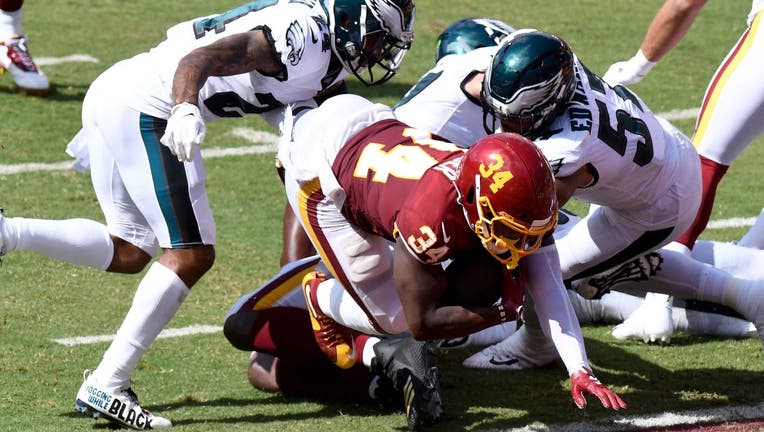 Peyton Barber #34 of the Washington Football Team scores a touchdown in the third quarter against the Philadelphia Eagles at FedExField on September 13, 2020 in Landover, Maryland. (Photo by Greg Fiume/Getty Images)

LANDOVER, Md. - After months of turmoil brought on by the COVID-19 pandemic and social unrest, the Washington Football Team gave DMV residents something to smile about Sunday when they upset the Philadelphia Eagles 27-17 at FedEx Field.

The win arrives after a disappointing 2019 campaign that saw the storied franchise stumble to a 3-13 record, which led to a number of firings among team brass.

After falling behind 17-0 early on in the home opener, Washington scored 27 unanswered points and shut out the Eagles altogether in the second half to claim the victory. 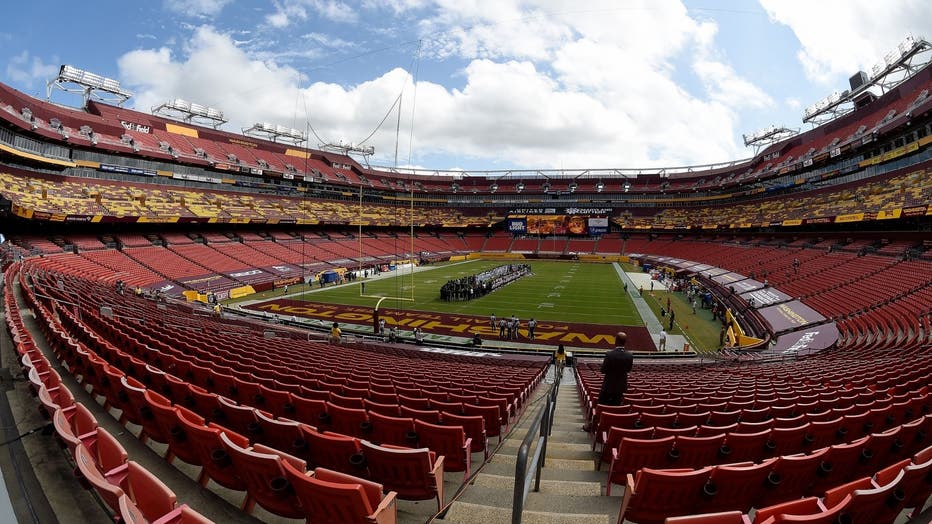 The Washington Football Team and the Philadelphia Eagles stand together on the field before the game at FedExField on September 13, 2020 in Landover, Maryland. (Photo by Greg Fiume/Getty Images)

A stadium left empty due to COVID-19 concerns greeted the NFC East Division rivals when they arrived in Landover.

The Howard University Choir performed "Lift Every Voice and Sing" in honor of the occasion.

Prior to the National Anthem, players from both the Philadelphia Eagles and Washington locked arms at midfield for a moment of unity before the game.

Eagles' players returned to the locker room for the anthem, while Washington players knelt before the anthem and stood during it.

With just over two minutes remaining in the quarter, Jake Elliott expanded the Eagles’ lead to 10-0 from 38 yards out.

At the 6:54 mark in the second quarter, Wentz threw his second touchdown pass, going over the top to find tight end Dallas Goedert for a 34-yard score.

Washington clawed back 7 points with under one minute remaining in the half when Dwayne Haskins, Jr. delivered a 6-yard touchdown pass to Logan Thomas.

Washington began to challenge the Eagles’ lead in the third quarter when Peyton Barber rushed for a 1-yard touchdown.

Hopkins knotted the game at 17-17 shortly after the fourth quarter began when he kicked a 38-yard field goal.

Washington took their first lead of the season at the Barber dove over a pile of would-be tacklers for a 3-yard touchdown.

Hopkins gave the home team a two-score cushion with 3:25 left in the game when he struck a 40-yard field goal.

READ MORE: No fans at Washington football team games in 2020

Washington has seen plenty of turmoil in the offseason.

But the team’s troubles continued to mount over the summer. In the midst of social unrest across the country, Washington eliminated its controversial former nickname.

Finally, a sexual harassment scandal cast a shadow on several high level figures in the franchise – including owner Dan Snyder.