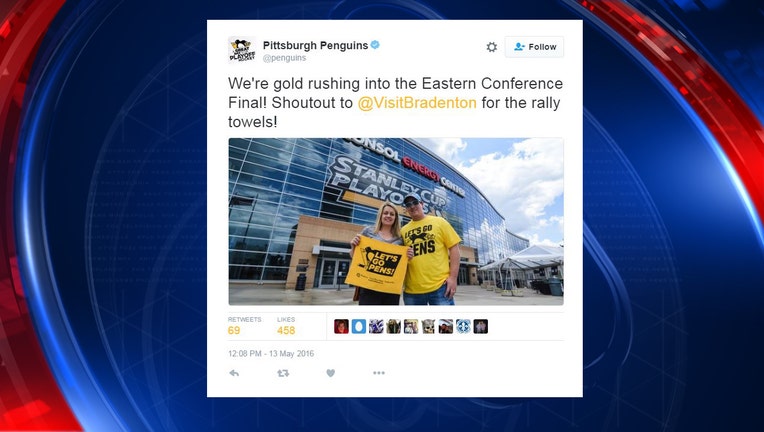 BRADENTON (FOX 13) - The Bradenton's visitor's bureau issued an apology after it received backlash for buying rally towels for Pittsburgh Penguins fans who attended the first game of the Eastern Conference Final Friday night.

#BoycottBradenton trended on social media during the Friday night game, after Tampa Bay Lightning fans saw a tweet from the Pittsburgh Penguins, thanking @VisitBradenton for the towels.

The Bradenton Area CVB is funded by taxpayer money, but it was unclear from where money to pay for the towels came.

"As a destination, we have and will continue to support the Tampa Bay Lightning through our annual marketing initiatives and wish both teams the best of luck in the Eastern Conference Finals," said Elliott Falcione, Executive Director of the Bradenton Area CVB.

Throughout the state of Florida, it is common for destination marketing organizations to have out-of-state partnerships through sports marketing initiatives, including major league teams.

"It's a great way to get our brand in front of a demographic that meshes with our visitor profile," Falcione explained. "It's about economic development for our region, the entire region which includes Tampa."